“If you're going to defund and destroy a police department as their mayor then attend a highly respected officer's funeral, perhaps do not continue to disrespect that officer's family, friends, and other officers by falling asleep.” 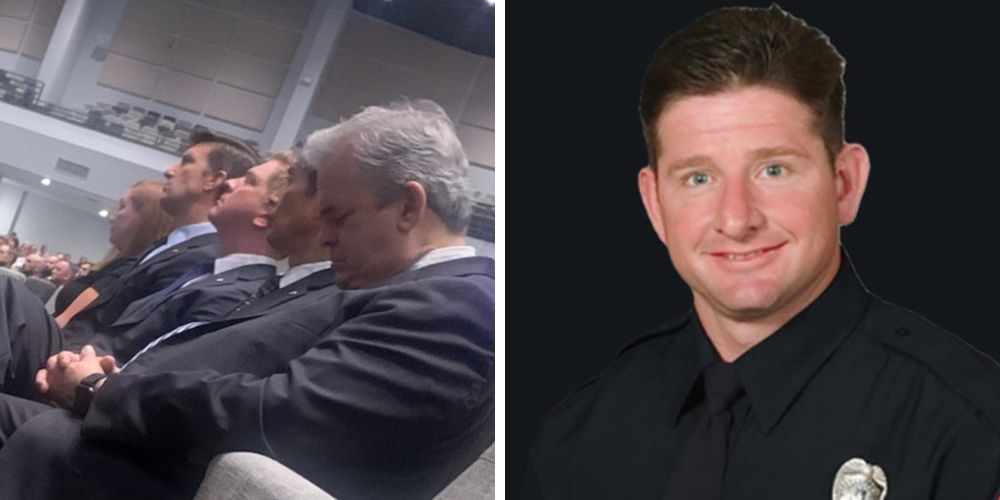 Ari Hoffman Seattle WA
Oct 5, 2022 minute read
ADVERTISEMENT
ADVERTISEMENT
Austin’s Democratic Mayor Steve Adler, whom many accuse of supporting the defund the police movement, was photographed appearing to fall asleep during a funeral on Monday for fallen police officer Anthony "Tony" Martin. According to local outlets, the service lasted only one hour.

After 20 years with the US Air Force, Officer Martin joined the Austin Police Department in 2006. He was killed in a crash on Sept. 23 coming home from the night shift on his police motorcycle. He leaves behind his parents, wife, three children, and one granddaughter. That crash remains under investigation.

Martin's daughter Ashley said at the funeral on Monday, "I have endless memories that I hold in my heart, but sadly that’s all I have now. My dad was always my hero, my protector, and my inspiration. He was my fearless leader. No matter how scary the path was, I knew I could follow him."

A senior officer at the Austin Police Department and member of the Texas Commission on Law Enforcement Justin Berry posted the picture of Adler at the funeral with his eyes closed and chin on his chest to social media writing, “If you're going to defund and destroy a police department as their mayor then attend a highly respected officer's funeral, perhaps do not continue to disrespect that officer's family, friends, and other officers by falling asleep.”

Berry told Fox News, "It's very disheartening to have the Mayor of the City of Austin – who was one of the ones that spearheaded all the defunding of Austin Police Department by a third of our budget, who voted to take away officers' pay stipends back in 2017, which had a huge financial impact on our families – to continue to go down a pathway that just shows nothing but the utmost disrespect and contempt."

Adler apologized after the funeral telling Fox news, "I want to express my deepest apologies to the family of Officer Martin. Officer Martin died 10 days ago and will forever be honored as a hero. This moment should be about him and his family, including his two daughters whose words today pierced my heart as a father."

"I hold Officer Martin in the highest regard. May his memory be a blessing to his family, and to the city he served."

As mayor, Austin, together with the city council, signed off on a $21 million budget cut to the department, one-third of it’s budget, in 2020. The funding was restored a year later according to the Austin American-Statesman in compliance with a law passed by the Texas legislature, bringing its total budget to a record high. However, the department has had 200 officer vacancies due since that time, partially due to the mayor and council canceling or delaying three scheduled cadet training classes. Additionally, a record number of officers have left the force which had approximately 250 vacancies at the end of September.

Austin Police Chief Joseph Chacon said at the Texas Tribune Festival on Sept. 24, "It was really a one-two punch, with COVID hitting in March of 2020 and then the George Floyd incident happening in May. Between those two, I saw a record number of people resigning and retiring."

Berry, one of 19 officers who were indicted earlier this year for their role in breaking up a 2020 Black Lives Matter riot, told Fox News, "We just had a massive survey was done that showed how highly displeased officers are towards the city… and then, less than a week later, he does this stuff."

A Listening to the Workforce Survey of Austin city workers conducted last month revealed that morale is at an all-time low. Only 20 percent of the police department’s employees believed their department was well managed with just 11 percent stating that "change is managed well" in the city.

Adler has a rocky relationship with the police in Austin. In July 2021, Officer Andy Traylor died from injuries sustained in a car crash and Traylor's wife asked Adler not to attend the funeral.

The executive director of the Combined Law Enforcement Associations of Texas Charley Wilkison said that the mayor's behavior at the funeral showed "his contempt for officers working extra shifts, risking their lives to protect their community," and called Adler "The worst ATX Mayor of all time."