The RCMP now believes that the two suspects for a double homicide and separate murder case are travelling through Manitoba, specifically in the areas surrounding Gillam and Fox Lake Cree Nation, reports Global News. 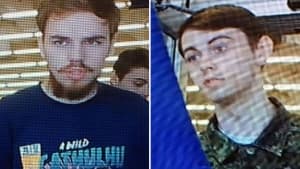 The RCMP now believes that the two suspects for a double homicide and separate murder case are travelling through Manitoba, specifically in the areas surrounding Gillam and Fox Lake Cree Nation, reports Global News.

The two suspects from BC, 19-year-old Kam McLeod and 18-year-old Bryer Schmegelsky, have now been charged with second-degree murder of 64-year-old Leonard Dyck, following a press release Wednesday evening. They are also the primary suspects for the double homicide of Australian born Lucas Fowler and his girlfriend Chynna Deese.

Canada-wide warrants have been released and a manhunt is currently underway for the two teens.

A tweet released by RCMP Manitoba earlier today has confirmed that a vehicle set on fire in the Gillam area is the same as the suspects were travelling in.

On Sunday the two were sited in northwestern Saskatchewan near Meadow Lake, only two days after their truck was discovered. Police have since released pictures of the two and the OPP believes they are headed further east to Ontario, adding “The suspects are to be considered dangerous.”

According to Global News, “RCMP Sgt. Janelle Shoihet said anyone who spots the teens, both six feet four inches tall and weighing around 169 pounds, should not approach them but call 911.”

Both are considered highly dangerous and have a history of disturbing behaviour.

As early as 13, Schmegelsky is remembered for having said highly disturbing things to his classmates, emphasizing his desire for blood lust.

A former classmate, Madison Hempsted, remembers her brief interactions with the boy in the 7th Grade.

“[Schmegelsky],” she continued, “would say things about how he would cut our heads off and then he would take a gun and put it in his mouth and shoot himself in front of us. Pretty detailed stuff.”

The RCMP believes that there is still more information to be gathered and has asked the public to come forward with anything they think may aid in the manhunt. Again, they emphasize that if the suspects are found, do not approach them, rather call 911 immediately.