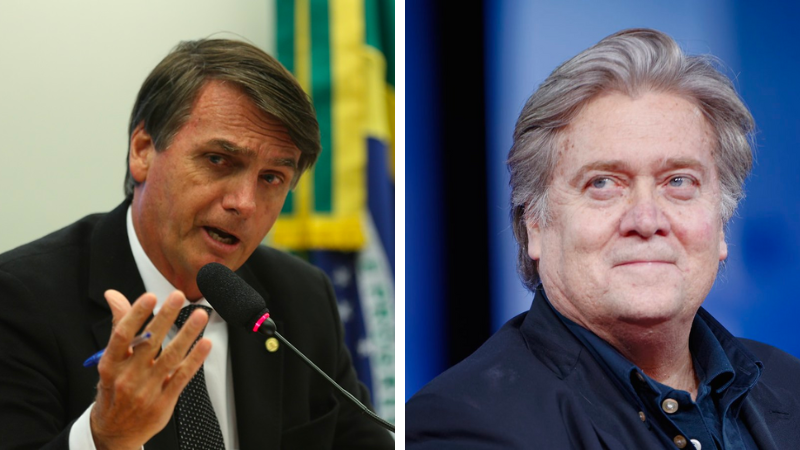 After a tight race, Luiz Inacio "Lula" da Silva will become the next president of Brazil. The far-left former Brazilian president won 50.83 percent of the vote, with over 98 percent of votes counted in the extremely tight run-off election on Sunday. Incumbent Jair Bolsonaro won 49.17 percent of the vote, compared to 50.83 by Lula da Silva, who was convicted in 2017 for money laundering though a court threw out his conviction in March 2021.

"He cannot concede, impossible," Steve Bannon said of the results. "Screw Biden, screw the State Department, screw the CIA, f*ck 'em." He said that "we have to outvote the machines, we have to be in the counting room... This is why we need people to get out the vote, force multiplier."


The two candidates went head to head in a first round of voting on October 2, though neither gained more than half of the votes, which led to Sunday's runoff vote.

More than 156 million people were eligible to vote in the election.

Bolsonaro faced heavy opposition from many in Brazil and was a divisive figure due to his views on Covid and his belief that herd immunity via natural infection would be the way to get his country out of trouble. The Brazilian Senate committee at one point even recommended that Bolsonaro face criminal indictments for actions related to the Covid death toll, which is the second-highest in the world.

Bolsonaro dismissed the idea of requiring vaccination passports for entry into Brazil and told the UN directly that he rejects the idea.

He caught Covid multiple times and insisted that those who wear masks are "f****ts". He said that Brazil needed to stop being a "country of sissies" when dealing with the virus, while also calling those who wore masks "fairies."

"Reports coming in that Brazilian Army are moving into the city areas near the Rio-Niteroi bridge, in Rio de Janeiro," read posts on Twitter.

His record was tarnished after a large corruption probe, dubbed "Operation Car Wash," led to charges against hundreds of politicians across Latin America.