Two pro-Hong Kong, 76ers fans say they were kicked out of a basketball game on Tuesday for waving signs and shouting support for the pro-democracy movement in Hong Kong. 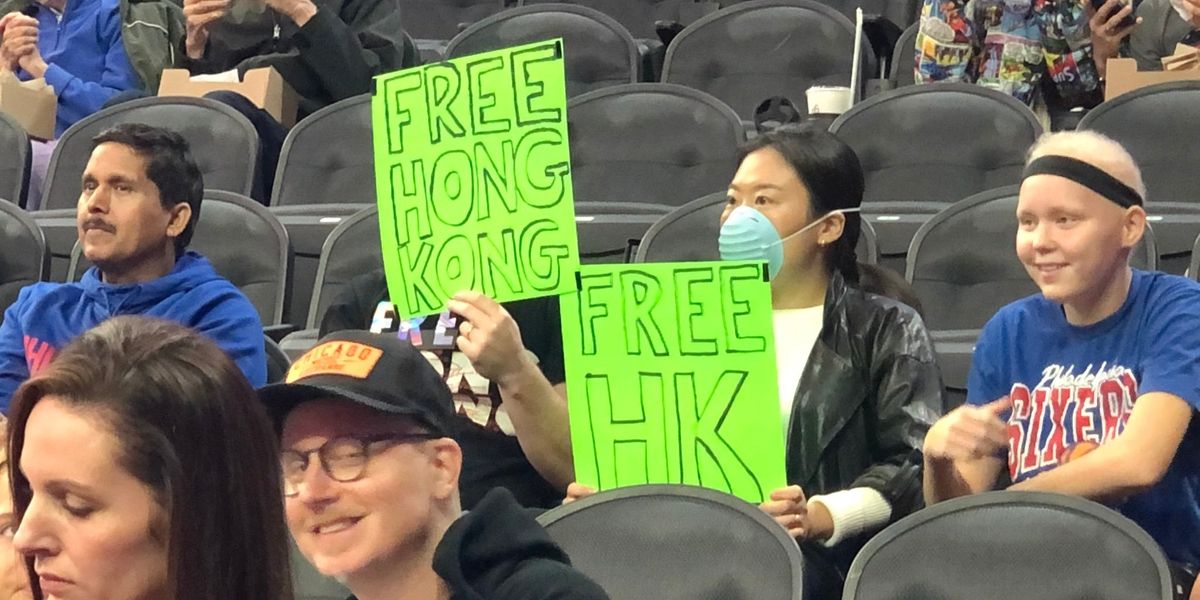 Two pro-Hong Kong, 76ers fans say they were kicked out of a basketball game on Tuesday for waving signs and shouting support for the pro-democracy movement in Hong Kong. The motivation for the small demonstration was likely due to who the 76ers were playing, the Guangzhou Loong-Lions of the Chinese Basketball Association.

Sam Wachs of Chestnut Hill, who attended with his wife, didn’t think the signs would cause a big disruption, but say they were removed from the game, nonetheless.

Wachs spoke with NBC10 after the incident, explaining that he lived in Hong Kong for two years and supports the protesters.

“We were just sitting in our seats near the Chinese bench,” Wachs said.

“As they were sitting, Wachs said security confiscated their signs,” reports NBC10. “He then said they were kicked out of the game during the second quarter by security after they yelled, “Free Hong Kong.”

The 76ers released the following statement on the incident:

The Wells Fargo Center’s event staff is responsible for the security and comfort of all guests at arena events, including 76ers games. At last evening’s game, following multiple complaints from guests and verbal confrontations with others in attendance, two individuals were warned by Wells Fargo Center staff about their continuing disruption of the fan experience. Ultimately, the decision was made by Wells Fargo Center personnel to remove the guests from the premises, which was accomplished without incident.”

The team also sent a statement on behalf of Wells Fargo Center.

Accompanying this statement was one from the Wells Fargo Center, which read, “During the second quarter of last night’s 76ers game, Wells Fargo Center security responded to a situation that was disrupting the live event experience for our guests. After three separate warnings, the two individuals were escorted out of the arena without incident. The security team employed respectful and standard operating procedures.”

This latest incident is only the most recent after a scandal last week which saw NBA Houston Rockets general manager Daryl Morey initially censored for a pro-Hong Kong tweet, likely at the behest of China. The NBA later came out in defence of Morey’s free speech rights.