An image of a hand posed in an "okay" symbol inside the window of a Portland federal courthouse was mistaken for a "white supremacist" and Ku Klux Klan sign by Antifa social media accounts. 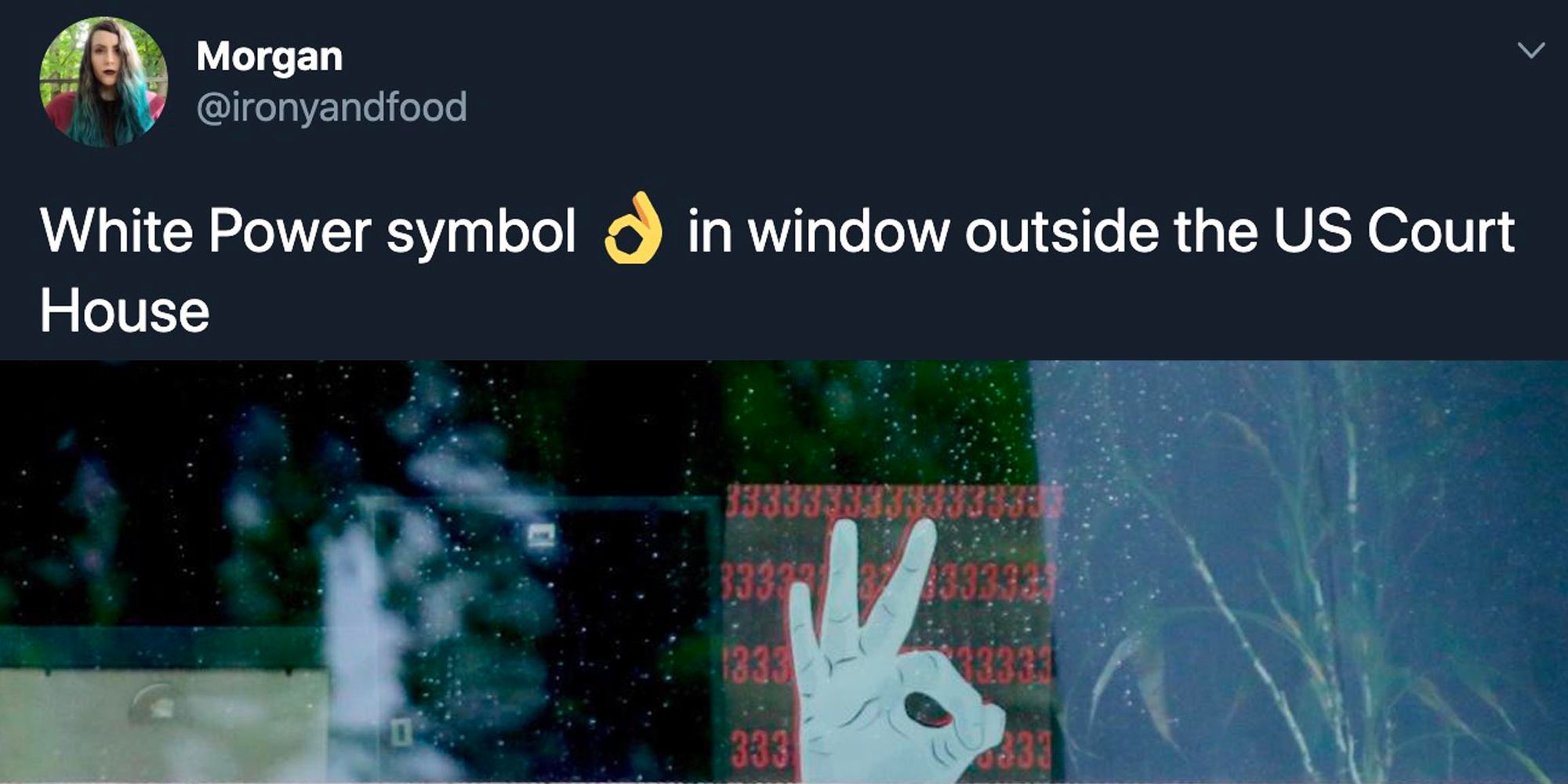 An image of a hand posed in an "okay" symbol inside the window of a Portland federal courthouse was mistaken for a "white supremacist" and Ku Klux Klan sign by Antifa social media accounts.

The video uploaded to Twitter on Saturday by Morgan McKniff, a Portland-based Antifa activist and self-described "citizen journalist," claims to show a racist symbol in the window of the Mark O. Hatfield US Courthouse, a building targeted during weeks of violent demonstrations by Antifa and Black Lives Matter rioters.

"White Power symbol in window outside the US Court House," McKniff tweeted along with the video. Her tweet was quickly shared by other Antifa accounts, racking up thousands of video views within hours. Antifa group Pacific Northwest Youth Liberation Front tweeted out an image of the hand, adding, "Inside the Federal Courthouse in Portland: White Power symbol on a background of 3s— '33' being used to signify 'KKK.'"

However, as it turns out, the image is not a white supremacist or KKK symbol but rather a poster for the Trail Blazers NBA basketball team produced by NBC Sports Northwest. The three fingers symbolize three points.

"We can confirm the poster spotted in a Hatfield Courthouse window this evening is in fact a Portland Trailblazers poster," tweeted the Oregon US Attorney's Office.

Regardless, social media users called for whoever occupied that window space to be fired. Others urged violence.

"What if a protester throws a rock at it, or aims a bibi gun at it?" Twitter user "@Rolandkerr3" asked. "Tsk, tsk, tsk, very dangerous. I hope nobody does that. Someone could get hurt."

The panic over white supremacy comes at a tense moment in Portland as the city is grappling with more than six weeks of violent protests by far-left extremists who have targeted the federal courthouse, businesses, police stations, the Sheriff's Office and more. The night before McKniff published the misleading video, a federal officer protecting the courthouse was hit on the head with a hammer by a rioter.

In recent weeks, other misinterpreted "okay" hand symbols have led to investigations and firings. Last week, an Oregon State Police trooper in Salem, Oregon, was the subject of an investigation after a short video released on Twitter purported to show him displaying the "hate" symbol. However, bodycam footage showed he was checking if a protester who was assaulted was okay. In June, a San Diego Gas and Electric employee was fired after he was photographed allegedly making the hand symbol on the side of his car. The man said he was cracking his knuckles.