Mark Ponder has been sentenced to 63 months in prison, three years of supervised release, and $2,000 in restitution. 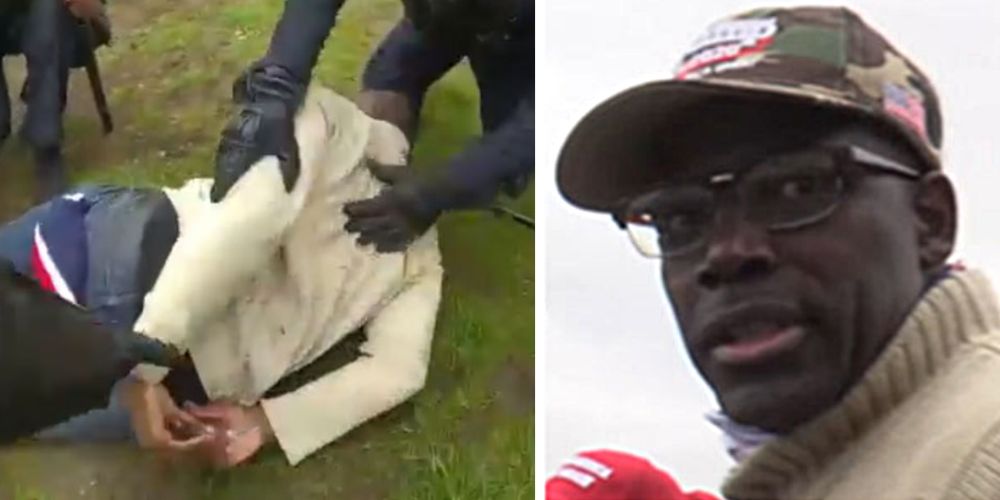 In the latest sentencing of a January 6 defendant, a 56-year-old black man has been sentenced to five years and three months in prison, tying for the longest sentence handed down for actions connected to the day yet.

Mark Ponder, a DC resident and, according to the Daily Caller, a former constituent services coordinator for the DC city council, plead guilty in April to attacking three police officers with poles.

His sentence is tied with fellow January 6 defendant Robert Scott Palmer for the longest sentences handed down yet in connection to the January 6, 2021 riot at the Capitol building.

Ponder had initially been indicted on 12 counts, including obstruction of law enforcement, civil disorder, and obstruction of an official proceeding.

In April, Ponder plead guilty to one count of Assaulting, Resisting, or Impeding Certain Officers Using a Dangerous Weapon, according to his plea agreement. He has been sentenced to 63 months in prison, three years of supervised release, and $2,000 in restitution.

In a document from the Department of Justice, Ponder could be seen on body cameras worn by officers responding to the scene wielding a long, thin pole at around 2:31 pm, "and wielding that pole in an aggressive manner as officers attempt to control the crowd."

Another video taken around the same time showed Ponder running towards a line of officers, and striking a uniformed officer with the pole. The officer defended himself with a shield, which in turn broke Ponder’s pole.

At 2:32 pm, Ponder was seen once again emerging from the crowd, carrying another pole, and attempted once again to strike the officers, which they fended off with shields.

Ponder once again tried to attack officers with a pole at approximately 2:49 pm. After being struck by Ponder, a group of officers tackled Ponder to the ground, and was detained, but the Department of Justice noted that "due to the chaotic nature of the day, the arrest was not completed on January 6, 2021."

According to his statement of offense, Ponder allegedly told the crowd "I will say this. When our country is being attacked with, like we are, we have a right to fight…that is what the Second Amendment was built on."

Ponder has insisted that his assaults of the officers were not "personal," but said in an interview with the FBI, "I know that I had an incident with them, but I’m trying to get the police to understand, I’m for you. At some point in time, the way this country is going, you gonna have to pick a side, where you stand at."

According to a Department of Justice document pertaining to the over 800 people arrested in connection to January 6, defendants convicted of assaulting officers have received far less sentences, ranging from five months in prison, 18 months of supervised release, and a $2,000 fine in the case of David Alan Blair, to the case of Cody Mattice, who was sentences to three years and eight months in prison, three years of supervised release, and $2,000 in restitution.

Officials and administration leaders dubbed the event as "white supremacist" in nature.

"The violent, deadly insurrection on the Capitol nine months ago, it was about white supremacy, in my opinion," President Joe Biden said at an event in October event in DC.

FBI Director Christopher Wray told the Senate in March of last year the attack on the Capitol was racially motivated.

"The attackers on Jan. 6 included a number … of what we would call militia violent extremism. And we have had some already arrested who we would put in the category of racially motivated violent extremism, white, as well," Wray said in testimony before the Senate, according to the Washington Post.

Ponder’s harsh sentencing in comparison to other January 6 defendants comes just two months Biden added seven new members to the US Sentencing Commission, in hopes that these new members could establish criminal justice reform and ease what activists see as excessive prison sentences, according to Reuters.

It also comes after Biden issued an executive order regarding policing, signed on the anniversary of George Floyd’s death.

The order also looked at strengthening the recruitment, promotion, and retention of officers through addressing current policies and developing best practices for conducting background investigations of recruits.