In one incident from 2019, Cummings, dressed in thigh-high boots and a bodysuit, performed "Baby Shark" for a two-year-old that was taken to a drag brunch in New Jersey. 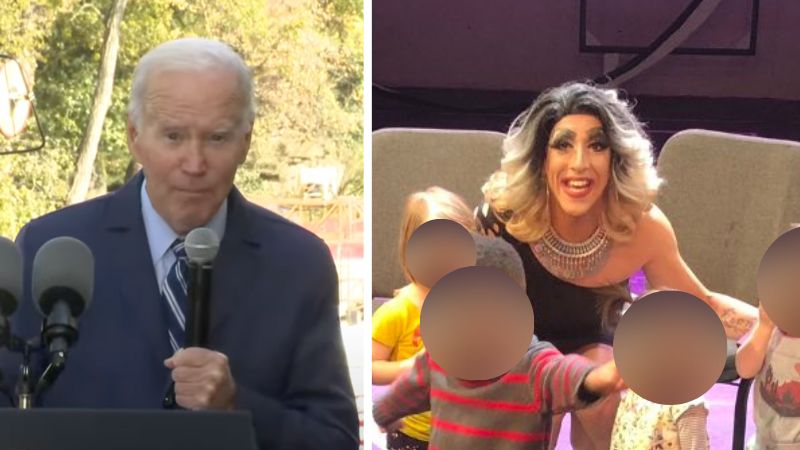 After the passing of the Respect for Marriage Act earlier this month that federalizes same-sex marriage, President Biden has invited, amongst a number of figures, a non-binary drag queen to attend Tuesday’s signing into law.

Marti Cummings posted a photo of the invitation to Twitter, writing, "To be a non binary drag artist invited to the White House is something I never imagined would happen. Thank you President & Dr. Biden for inviting me to this historic bill signing. Grateful doesn’t begin to express the emotions I feel."


Cummings is a self-described TV personality and political figure, and was a former city council candidate for New York City’s 7th district, according to Cumming’s website.

Cummings has also been seen performing for children at drag queen brunches and story time hours.

In one incident from 2019, Cummings, dressed in thigh-high boots and a bodysuit, performed "Baby Shark" for a two-year-old that was taken to a drag brunch in New Jersey.

In the video, posted to Twitter by Cummings, the drag queen hopped on top of the table, lip-synching to the popular children’s song.

Cummings was also seen in a number of posts throughout the beginning of the pandemic holding virtual "Drag Queen Story Hour" events through Facebook’s live streaming option.

In a post from December 4, Cummings wrote, "I love doing Drag Story Hour. Despite what conservatives say, this family friend event is a way to spread joy, teach acceptance & love. A way to bring people together. Kids just want to hear their favorite stories…keep spreading hate because I’m gonna keep spreading joy.’

The invites come amidst a trend from the Biden administration of inviting prominent LGBTQ figures to the White House.

Most infamously, Biden invited popular TikToker Dylan Mulvaney, known for the series "Days of Girlhood," in which documents Mulvaney’s journey from being non-binary to a transgender girl, to speak with the president.