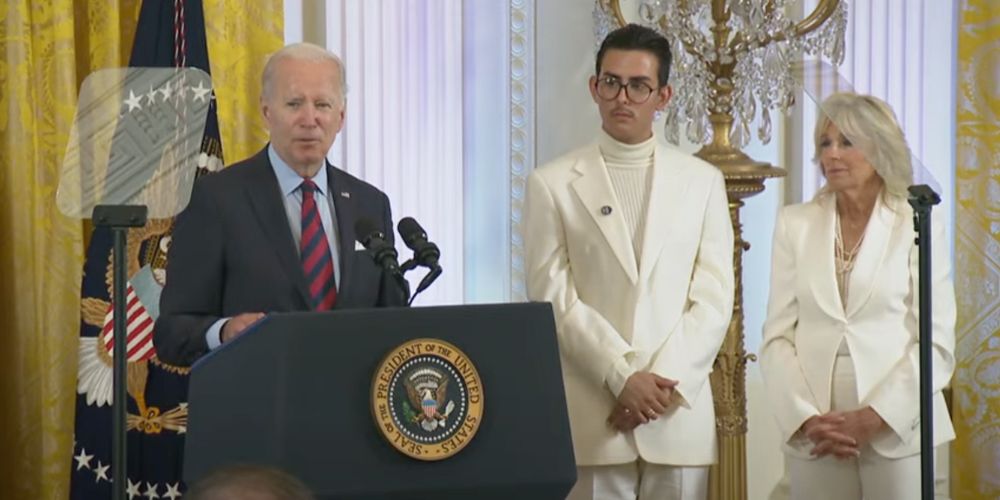 On Wednesday, President Biden marked Pride Month with a new set of executive actions, saying the US is in a "battle for the very soul of this nation," noting legislation passed in states that protect children from gender ideology.

Biden opened his remarks by listing off the numerous members of his cabinet that are part of the LGBTQ community, stating that "I think we have more LGBTQ+ people than any administration or every administration combined."

"Pride is back at the White House. On day one, this has been the most pro-equality administration in history."

"No one knows better than the people in this room, we have a lot more work to do. A lot more work to do. I don't have to tell you about the Ultra MAGA agenda, attacking families and our freedoms. 300 discriminatory bills introduced in states across this country," said Biden.

"In Texas, knocking on front doors to harass and investigate parents who are raising transgender children. In Florida, going after Mickey Mouse for God's sake.

"All of you in this room know better than anyone that these attacks are real and consequential for real families, for real families," said Biden, noting the arrest of 31 "white supremacists" in Idaho last week at a Pride event.

"Violent attacks on the community including ongoing attacks on transgender women of color make our nation less safe, because they tax her more than ever last year. And they're on pace again this year. They're disgusting. And they have to stop," he continued.

Towards the end of his speech, Biden called upon Congress to pass the Equality Act, which "prohibits discrimination based on sex, sexual orientation, and gender identity in areas including public accommodations and facilities, education, federal funding, employment, housing, credit, and the jury system," according to the bill's synopsis.

Notably, Biden stumbled upon the ever-expanding acronym for the LGBTQ community, stating the "LGBTQL - I excuse me, plus."

Speaking before Biden, the First Lady expressed her joy at being able to celebrate Pride at the White House, noting that "rights are under attack."

"We know that this progress haven’t reached everyone in the same way. We know that in places across the country like Florida, Texas, or Alabama, rights are under attack. And we know that in small towns and big cities, prejudice and discrimination still lurk."

The First Lady said that "It shouldn’t take courage" to "be yourself," to go to school to be the "person you know you are," and to hold the hand of the person they love.

The First Lady then introduced Javier Gomez, who was the president of the Gay-Straight Alliance at Miami's iPrep Academy, and organized walkout protests at his school to protest Florida’s Parental Rights in Education bill, which Jill Biden referred to as the "Don’t Say Gay Bill."

"I hear other students in Florida and across the country would not be able to get the same support because of hateful legislation like the Don’t Say Gay Bill," said Gomez.

"But my presence here is a testament that we are fighting back, because our lives are glorious, beautiful, and worthy," he continued.

Gomez continued on to say that he helped to organize protests across the state, saying that "we look into the eyes of those pushing this cruel and dangerous legislation and said, it’s ok to be gay."

At the end of his remarks, Biden signed the executive order "Advancing Equality for LGBTQI+ Individuals," which will address "Over 300 anti-LGBTQI+ laws" that have been passed in the country.

The executive order instructs the Department of Health and Human Services to "release new sample policies for states on how to expand access to comprehensive health care for LGBTQI+ patients," and directs the Department of Education to address "the impacts of state laws that target LGBTQI+ students."

The executive order will also crack down on the practice of "conversion therapy."