Biden does away with female athletics in one sweeping executive order

What it truly comes down to is the obsession of the left, especially LGBT activists, to erase the very concept of biological sex in favor of gender identity. 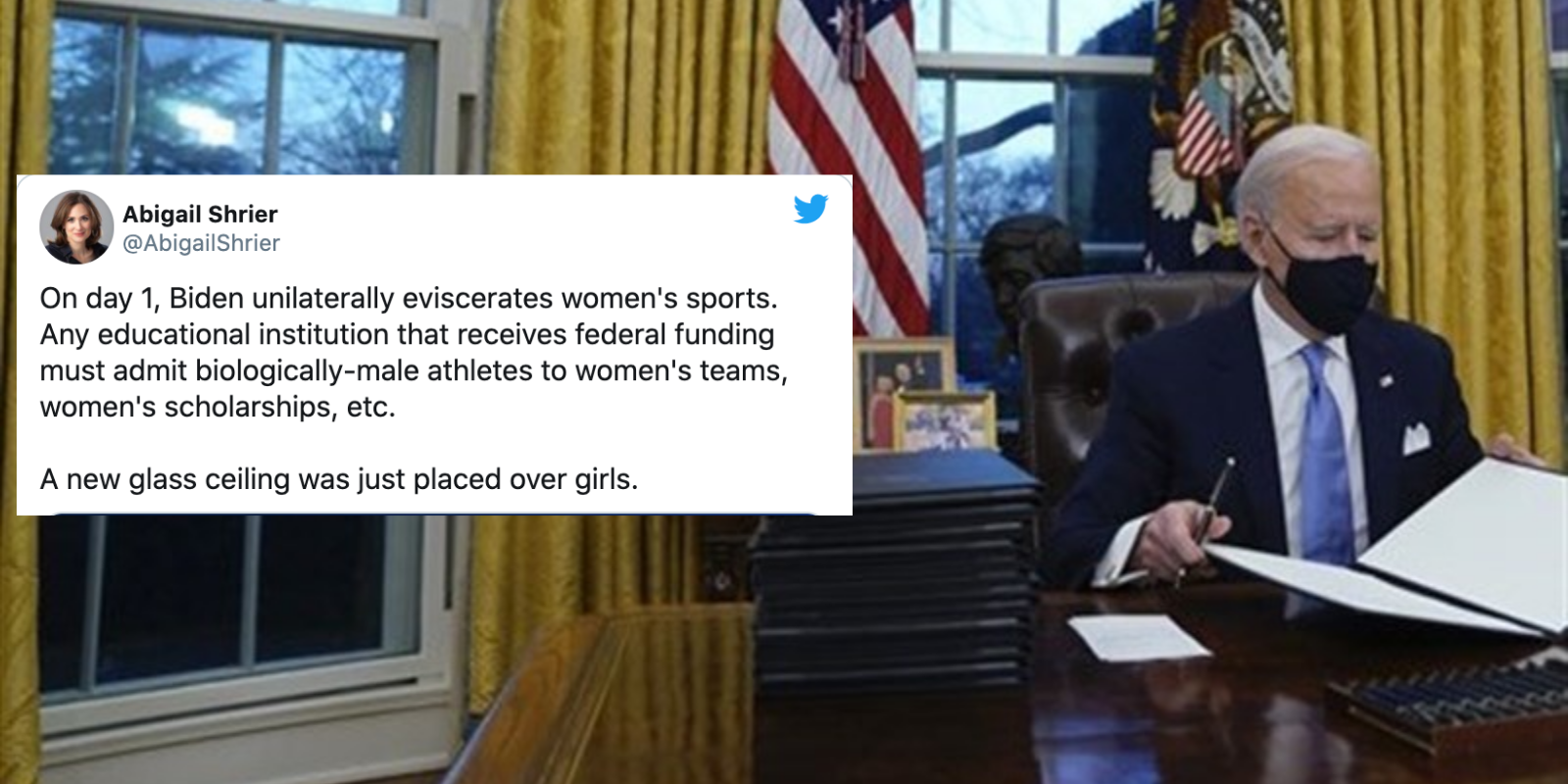 In one sentence, President Biden has changed what it means to be a female athlete in American schools. In an inauguration day executive order titled, Executive Order on Preventing and Combating Discrimination on the Basis of Gender Identity or Sexual Orientation, Biden states, "Children should be able to learn without worrying about whether they will be denied access to the restroom, the locker room, or school sports."

The order also details alleged discrimination and hate crimes in various areas of public life and the administration's dedication to preventing such abuses. The issue of women's and girls' sports, however, has caused a great deal of concern.

Erielle Davidson of The Jewish Institute for National Security of America (JINSA), argued, "Sad day for women's sports. Women must compete against biological males at the risk of injury and loss of title, thanks to a new Biden executive order. Don't ever tell me this is "pro-woman." It's not. It's destructive and malicious."

The topic has been widely debated for years as LGBT activists have pushed more aggressively for primarily biological male inclusion in female-only sports. Despite ongoing demands from leftwing voices that there are no biological advantages for gender-nonconforming males who identify as transgender and use female pronouns, over women, the argument simply does not pass the logic test for most people.

The ACLU, for example, in an article titled, Four Myths About Trans Athletes, Debunked, insists, "Trans athletes vary in athletic ability just like cisgender athletes." Quoting a transgender athlete, the argument essentially states that some girls have longer legs or their parents trained them younger or they are simply more dedicated, etc.

However, a recent study has demonstrated this to not be an accurate assessment. The British Journal of Sports Medicine found that even with hormone therapy, "[T]wo years on, trans women were still 12 percent faster on the 1.5 mile-run than their cisgender peers." This study was performed by analyzing the athletic performance of men and women in the Air Force before, during and after hormone therapy. Gender-nonconforming women who identify as transgender who take testosterone, in contrast, began to match their biologically male peers within six months to a year on therapy. Even so, they could not match the amount of testosterone in male blood.

Women tend to have a testosterone level of .09 to 4.3 nmol/litre, but the International Olympic Commission allows males to compete in female sports if they have 10 nmol/litre of blood for 12 months or more. Even on a year of testosterone, women never get to 10 nmol/litre.

As the former director of The American Immigration Lawyers Association (AILA) board of governors, Matthew Kolken noted, "I have boy/girl twins that were born 27 seconds apart. My daughter is arguably the best athlete in her age group in the area that we live. My son is a solid athlete and a starter on his travel team. There is literally no way at 12 years old my daughter can compete with my son."

The reality that biological differences between boys and girls do in fact exist is simply common sense to most people, regardless of the efforts to demand otherwise by leftwing activists.

It would seem though that even they recognize this to some degree as otherwise they wouldn't continue insisting on sex-segregated sports in the first place. Logically if a teenage boy can compete with teenage girls, the point of a girls' team at all makes no sense. Biden's order did not specify hormone treatment or any level of transition at all. The order addresses only self-identity. This is sheer madness.

What it truly comes down to is the obsession of the left, especially LGBT activists, to erase the very concept of biological sex in favor of gender identity. The ACLU in its guide demands, "Girls who are trans are told repeatedly that they are not 'real' girls and boys who are trans are told they are not 'real' boys. Non-binary people are told that their gender is not real and that they must be either boys or girls. None of these statements are true. Trans people are exactly who we say we are." The issue isn't fairness in sports or access to athletics for transgender students. It's an issue of public validation of belief.

Along with this is the inconsistent argument that, "When a person does not identify with the sex they were assigned at birth, they must be able to transition socially — and that includes participating in sports consistent with their gender identity." It seems that the entire point is to demand that a gender-nonconforming young male who identifies as transgender is literally a girl who is just different, like a girl who happens to be 6'5 or a girl with a physical disability who wants to play sports while also insisting the biological male needs to socially integrate with the other girls for their mental well-being.

It should be noted this seems to only go one way. Whether intentional or not, Wikipedia removed its pages for the timeline of women's sports, both the general page and the US page, citing copyright concerns, on the same day as this Executive Order was released. The "History of Sport" remains active. It would seem that with few exceptions, gender-nonconforming female athletes who identify as transgender are not flooding male sports at any level of competition. There is no concern at all regarding their participation. It's clearly not an anti-transgender argument.

A gender non-conforming female athlete who identifies as transgender who takes testosterone, as the above study shows, cannot reasonably compete with biologically male peers. The sole issue revolves around gender-nonconforming male athletes who identify as transgender competing against females and dominating women's sports, pushing women and girls to the sidelines and denying them the ability to fairly succeed.

If it were simply an issue of access to sports participation, a more rational approach, given the science and the realty of physical differences involved, would be to open up men's and boys' sports to gender-nonconforming persons of both sexes who identify as transgender. This would allow both gender-conforming and gender-nonconforming females who are not taking drugs to compete against each other.

What we are seeing is ideological domination. While opponents simply argue for fairness in sports for girls, activists exploit the natural impulse of most people for fairness to demand the opposite. No one wants gender-nonconforming teenagers or adults who identify as transgender to be excluded from sports. However, the argument seems to have nothing to do with actual equality or participation, otherwise more reasonable options would be advanced. The issue, as the ACLU states clearly, is about social acceptance of gender identity and the forced public validation that gender-nonconforming males who identify as transgender are actually women, even if it harms women in the process.