"At some point, there'll be a reckoning, and inflection point. Like we're facing right now as a nation," Biden said. 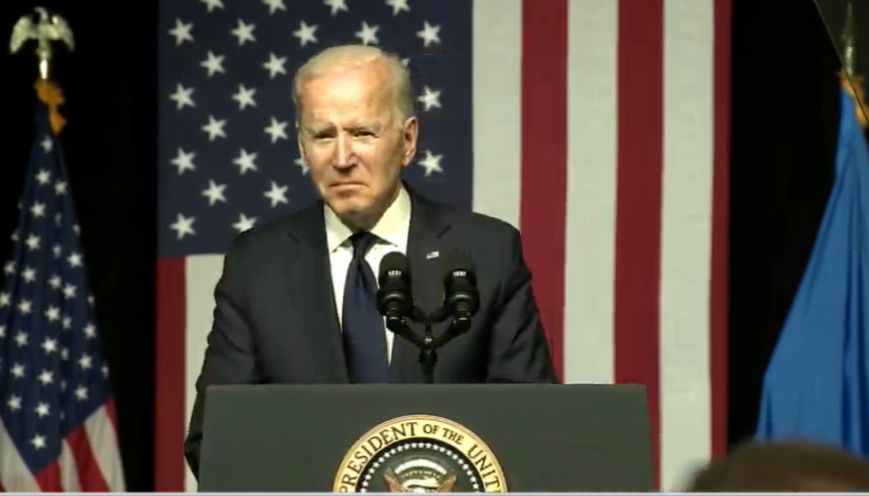 President Joe Biden spoke from Tulsa on Tuesday to speak on the centenary anniversary of Tulsa Race Massacre to commemorate the atrocities committed and to make sure that the nation doesn't forget what happened in 1921. Biden was the first president to go to Tulsa to mark the anniversary.

In decrying the historical horror from 100 years ago, Biden spoke about seeing photos of 30,000 Ku Klux Klan members marching down Pennsylvania Avenue in Washington, DC. "There were 37 members of the House of Representatives who were open members of the Klan," he said.

He said the Klan was as much about white Christians wanting to make sure white ethnic immigrants, like his ancestors, from Europe did not "pollute Christianity." "The flames from those burning crosses torched every area of the country," he said. "Millions of white Americans belonged to the Klan," he said, "and they weren't even embarrassed about it, they were proud of it."

"That hate became embedded systematically and systemically in our laws and our culture. We do ourselves no favors by pretending none of this ever happened," Biden said. "We should know the good, the bad, everything, that's what great nations do, they come to terms with their dark sides, and we're a great nation. The only way to build a common ground is to truly repair and rebuild."

"I come here to fill the silence," he said to great applause.

"At some point, there'll be a reckoning, and inflection point. Like we're facing right now as a nation. Many people hadn't seen before or simply refused to see cannot be ignored any longer you see it in so many places. And there's greater recognition that for too long we've allowed a narrow, cramped view of this nation to fester, that America is a zero sum game where there's only one winner."

He used this moment to advocate for race-based investments from the federal government. "We must find the courage to change the things we know we can change," he said, noting that this was the goal of the administration.

"Today we're announcing two...efforts targeted toward black wealth creation," he said. Biden mentioned combatting racial discrimination in housing, meaning the administration will target the practice of redlining and will address the issue of home appreciation and value assessments. He said that black home ownership in the US is lower today than when the Fair Housing Act was passed.

He plans to increase the share of the dollars the federal government spends to small businesses, including businesses owned by black and brown people. Biden proposed sending 3-and-4-year-olds to school, that this would increase the likelihood of those kids doing well and going to college.

Biden touted his infrastructure plans and decried voting laws that have been passed in Republican-led states. He asked Vice President Kamala Harris to focus on dealing with these voting laws. "Hate is never defeated, it hides," he said. "So folks, we must not give hate a safe harbor."

He used the opportunity to note that "According to the intelligence community, terrorism from white supremacy is the most lethal threat to the homeland today." He referenced Trump's Department of Justice making the same claim, though that was on the basis of then-FBI Director Chris Wray's information. Biden also touted his hate-crimes bill against violence against Asian Americans and Pacific Islanders.

An example of racial progress, he said, was the number of interracial couples visible in advertising. "Two to three our of five have mixed race couples, that's not by accident: They're selling soap, man!" He said. He pinned American culture to what's happening in advertising.

The black teen was blamed, and "hell was unleashed," he said, as "the mob terrorized Greenwood, torches, and guns, shooting at will." Black men were dragged by white men in trucks and black families were butchered by white people, while churches were burned. He paused for a moment of silence for the victims and their descendants.