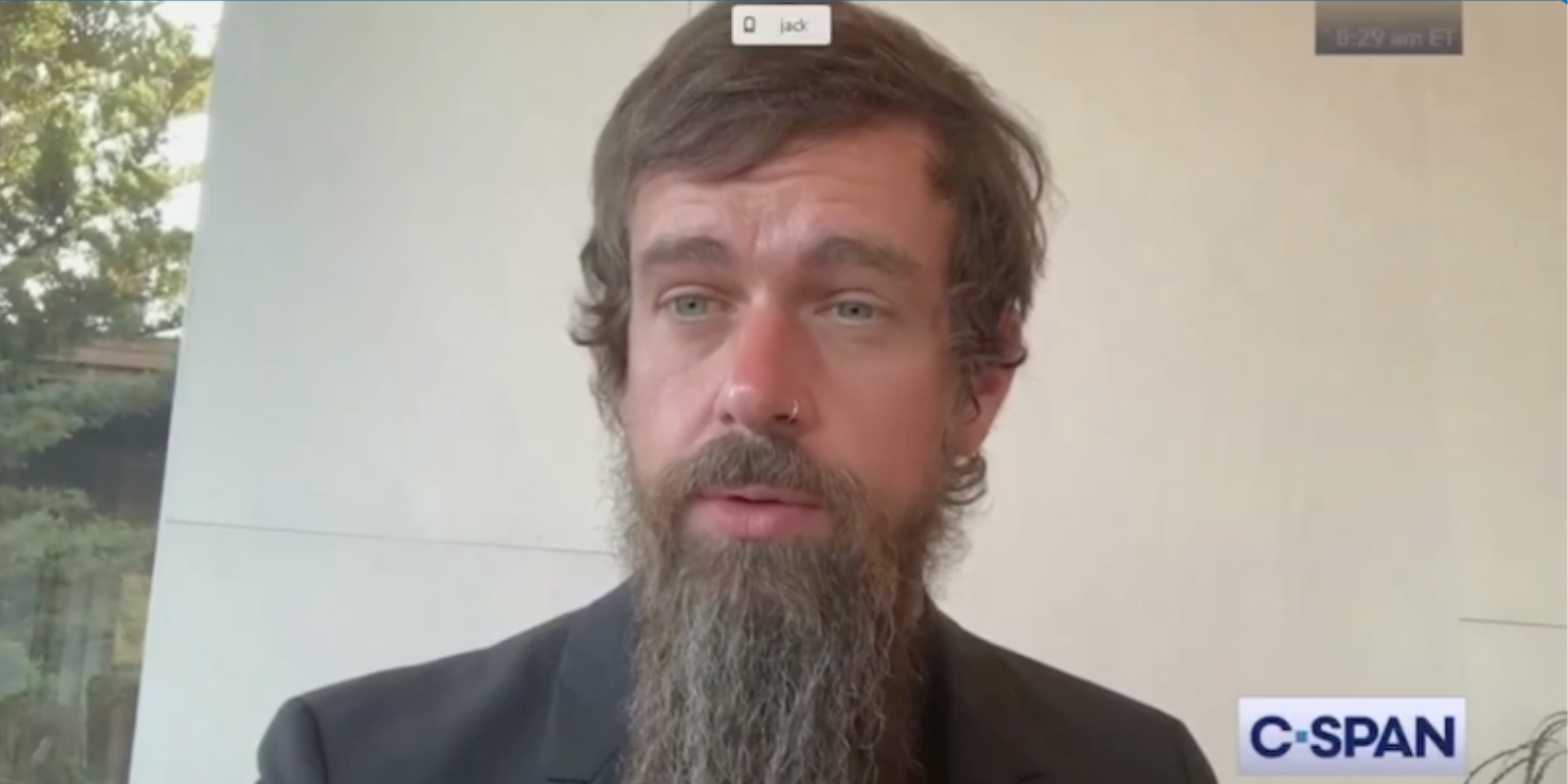 A Senate Commerce Committee hearing took place Wednesday between lawmakers and CEOs from Facebook, Google, and Twitter which opened a line of inquiry into how dominant tech platforms are moderating content and speech. Sen. Ted Cruz (R-TX) questioned Twitter CEO Jack Dorsey on censorship of an article published in the New York Post, which alleged evidence of corruption against former VP Joe Biden. This resulted in a heated two week standoff after the Post was banned from the Twitter platform.

When asked by Sen. Cruz on whether Twitter has the ability to influence elections, Dorsey said that Twitter is "one part of a spectrum of communication channels," implying that because users have a choice they can simply go to another channel if they are being censored. What Dorsey miscalculates is that Twitter is a dominant distribution channel for journalists because it controls and centralizes a mass global audience, far greater than any single publishing house could ever amass.

"Why do you persist in behaving as a Democratic super PAC," Cruz continued, "silencing views to the contrary of your political beliefs?"

Sen. Roger Wicker (R- MS) the Commerce Committee chairman, and Sen. Cory Gardner (R-CO) both questioned Dorsey about instances in which Twitter had either removed or labeled President Trump's tweets but had not done the same for officials in repressive governments. Dorsey described tweets from repressive governments as "sabre rattling," threatening actions of force, which he claims does not violate Twitter terms of service.

Although Twitter says it does not make judgements on personal beliefs, the platform has served as a prominent tool for activism, with its own executives and employees rooted firmly in social movements. Over 99 percent of donations from Twitter executives, employees, and affiliates are sent to the Democratic Party, which does not include the support of activist interests that move through the platform.

Censorship has been gaining traction on a slant, with calls from The New York Time's (NYT) own editorial board suggesting tech platforms take editorial privilege over President Donald Trump's tweets and posts.

"This job is too important for the bots" said Greg Bensinger of the NYT, "The online platforms should assign a special team to personally review the president's daily posts and cut loose those that violate their rules or even just good taste. That's the beauty of being the boss."

Dominant tech firms, and members of the press have treated censorship and suppression, not only as a necessary evil, but as a civic duty. The passive disinterest and active resistance the press has shown for reporting in favor of their preferred candidate during the 2020 presidential election has never been more obvious. While unverified allegations alleging a conspiracy between the 2016 Trump campaign and the government of Russia were aggressively pushed by the press on social media, the New York Post story reporting on alleged misconduct by former VP Joe Biden was aggressively suppressed.

Both Twitter and Facebook separately took steps to limit the distribution of the Post articles. While Twitter blocked links to the Post article, and suspended the accounts of users who shared the article, including that of White House Press Secretary Kayleigh McEnany, Facebook took a less extreme approach by reducing reach. The RNC responded by filing a complaint with the Federal Election Commission over Twitter's actions citing an, "illegal corporate in-kind political contribution to the Biden campaign."

As Washington DC's 4th District Police Department fell under assault Tuesday, police lines were held against a Black Lives Matter protest that turned violent. While social media platforms claim they remove posts that incite violence, the DC Chapter of Black Lives Matter was allowed to use Twitter to mobilize violent attacks against the police department.

While inciting violence goes against Twitter policy, the social media giant has allowed an onslaught of organized unrest to go unchallenged in areas it shares ideals and interests. As looting and violence in other parts of the nation continued, coordinated influences from left leaning news publications and their representatives undermined the severity of the violence, while protesting against conservatives for drawing attention to it.

Democrats at the Commerce Committee hearing largely rejected Republican line of questioning, accusing them of politicizing a partisan problem. Sen. Richard Blumenthal (D-Conn.) said questions were meant to, "bully and browbeat the platforms here to try to tilt them toward President Trump's favor." Sen. Amy Klobuchar (D-Minn.) expressed her disinterest in the hearing and pushed for focus on privacy and antitrust.

The hearing contributed testimony to a broad review of decades-old federal laws known as Section 230 of the Communications Decency Act, which grants platforms broad immunity for content users post to their sites. What these hearings demonstrate most of all is how corporate power can be as much of a threat to civil liberty as government power. When dominant firms, lawmakers, and members of the press unify their political interests, corporate power becomes sovereign power, unrestricted and unrestrained. The general opinion held by Democrat lawmakers that anti-conservative bias is a false narrative presents a startling logical fallacy.

An old adage on self-deception posits that the greatest harm in the world is enacted by people with good intentions. The creation of tyrannical systems and totalitarian dictatorships have been founded on the ideals of people convinced that their actions benefit humankind. Isabel Paterson's book, God of the Machine, describes this effect as, "not by accident, lapse, or omission. It is the result of their deliberate actions, long persevered in, which they hold to be motivated by high ideals toward virtuous ends."

Paterson theorizes in defense of individualism as the source of moral and political progress, with limited constraints as a means to economic freedom, and saw capitalist institutions as the machinery through which human energy works. In a letter from Ayn Rand to Paterson in 1943, Rand wrote, "The God of the Machine is a document that could literally save the world ... The God of the Machine does for capitalism what Das Kapital does for the Reds and what the Bible did for Christianity." It is hard not to notice this sentiment in our view of the modern technologies and communication protocols that enabled the Internet to become an important equalizer in free competition. The debate on individual freedom and liberty rests heavily on capitalism's use of power, and how companies like Facebook, Google, and Twitter use these powers to control the digital economy and the marketplace of ideas.

Platforms amplify and suppress content through computer algorithms, these algorithms are built by engineers, and can, as Facebook's Mark Zuckerberg has attested, be manually tuned by personnel. An investigation by the Wall Street Journal into Google's algorithms demonstrates how queries and searches by consumers are undermined with the help of blacklists, algorithm tweaks, and an army of contractors.

While tech leaders like to remind us that their systems are evolving, they fail to see the importance of the fact that information also evolves. The acquisition of knowledge by platform users is progressive and cumulative. As information evolves in a marketplace of ideas it is not big tech's job to maintain sovereignty over which information is correct, it is their job to enable the public to determine what is true as new information becomes available.

Implementing censorship is a huge liability for companies who position themselves not only as arbiters of truth, but as publishing partners who make editorial decisions. The newest occurrence is a future concern—that the algorithms will also control narratives to such an extent that no one will have a voice. Big tech committing itself to silence the voices of opposition will continue down a path of increasingly repressive measures.

Harry S. Truman gave a similar message to Congress on the Internal Security of the United States. His message: "Once a government is committed to the principle of silencing the voice of opposition, it has only one way to go, and that is down the path of increasingly repressive measures, until it becomes a source of terror to all its citizens and creates a country where everyone lives in fear."

Like algorithms, systems of governance are engineered, and it is difficult to predict how the impact of these human endeavours will affect the 2020 presidential election and continue to affect society at large. In the aftermath of the Hunter Biden expose, suppression is a bigger issue, and one that many lawmakers and members of the press refuse to acknowledge as they instead court the favour of special interests.

It is not just innovative technology that has enabled dominant tech firms to become powerful, they are powerful because they devise the political structure which allows the flow of the digital economy to take its proper course. The sovereignty of dominant tech firms erodes democracy, and we must not let the bureaucratic gods of the machine and the invisible hands of the algorithm force us to do capitalism's work for it.