Despite Former President Bill Clinton’s denials on Monday, wherein he claimed he was ignorant of convicted sex offender Jeffrey Epstein’s “terrible crimes” and that he only took 4 trips on the notorious “Lolita Express,” flight logs disseminated by Fox News show a very different reality. 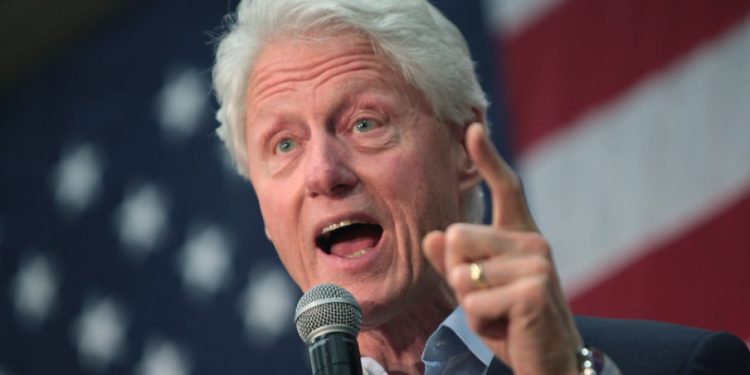 Despite Former President Bill Clinton’s denials on Monday, wherein he claimed he was ignorant of convicted sex offender Jeffrey Epstein’s “terrible crimes” and that he only took 4 trips on the notorious “Lolita Express,” flight logs disseminated by Fox News show a very different reality.

“Clinton’s presence aboard Jeffrey Epstein’s Boeing 727 on 11 occasions has been reported, but flight logs show the number is more than double that,” Fox News’s Malia Zimmerman writes.

Clinton, in his statement, claimed that his trips on Epstein’s private jet were in relation to Clinton Foundation philanthropy and that on “every leg of every trip” he was accompanied by staff, foundation supporters and Secret Service agents.

However, this statement is also false. Bill Clinton ditched his security detail multiple times. Clinton declined Secret Service protection at least 5 times while aboard the “Lolita Express,” choosing to fly alone with Epstein.

“Official flight logs filed with the Federal Aviation Administration show Clinton traveled on some of the trips with as many as 10 U.S. Secret Service agents,” Fox News reports. “However, on a five-leg Asia trip between May 22 and May 25, 2002, not a single Secret Service agent is listed.”

Jeffrey Epstein’s Boeing 727 gets its nickname “Lolita Express” from the Russian novelist Vladimir Nabokov’s magnum opus Lolita, which contains the controversial plot of a much older man supposedly being seduced by an adolescent girl. That Epstein owned a plane which, even before his recent arrest, had been given that nickname is very telling regarding how open a secret his continued involvement with minors was, in many ways implicating the other passengers aboard.

“Bill Clinton … associated with a man like Jeffrey Epstein, who everyone in New York, certainly within his inner circles, knew was a pedophile,” said Conchita Sarnoff, of the Washington, D.C. based non-profit Alliance to Rescue Victims of Trafficking, Fox News reports. “Why would a former president associate with a man like that?”

While Epstein has been accused of having solicited and provided forced, underage prostitutes as young as 14, his record of privately settled lawsuits reveals that it is likely that some of the alleged victims were even younger.

“He [Epstein] has reportedly settled lawsuits from more than 30 “Jane Doe” victims since 2008,” Gawker’s Nick Bryant writes, adding “the youngest alleged victim was 12 years old at the time of her abuse.”

Prosecutors of the Epstein case have also touched upon the prostitution network Epstein is alleged to have created, saying that some of the recently obtained material suggests that Epstein may have turned some of his underage victims into recruiters to bring in more, the Daily Beast reports.

As this case continues to evolve, many in the media believe that there is a possibility of obtaining hard evidence on those who may have solicited Epstein’s alleged prostitution services. This leaves open the possibility of some of the highest ranked and respected people whom we all know, Bill Clinton included, potentially facing decades in prison.

Christine Pelosi has even come out to warn Democrats that “some of their favorite people could be caught up in the sex trafficking case.” and, as more information is revealed, her warning seems much more plausible.