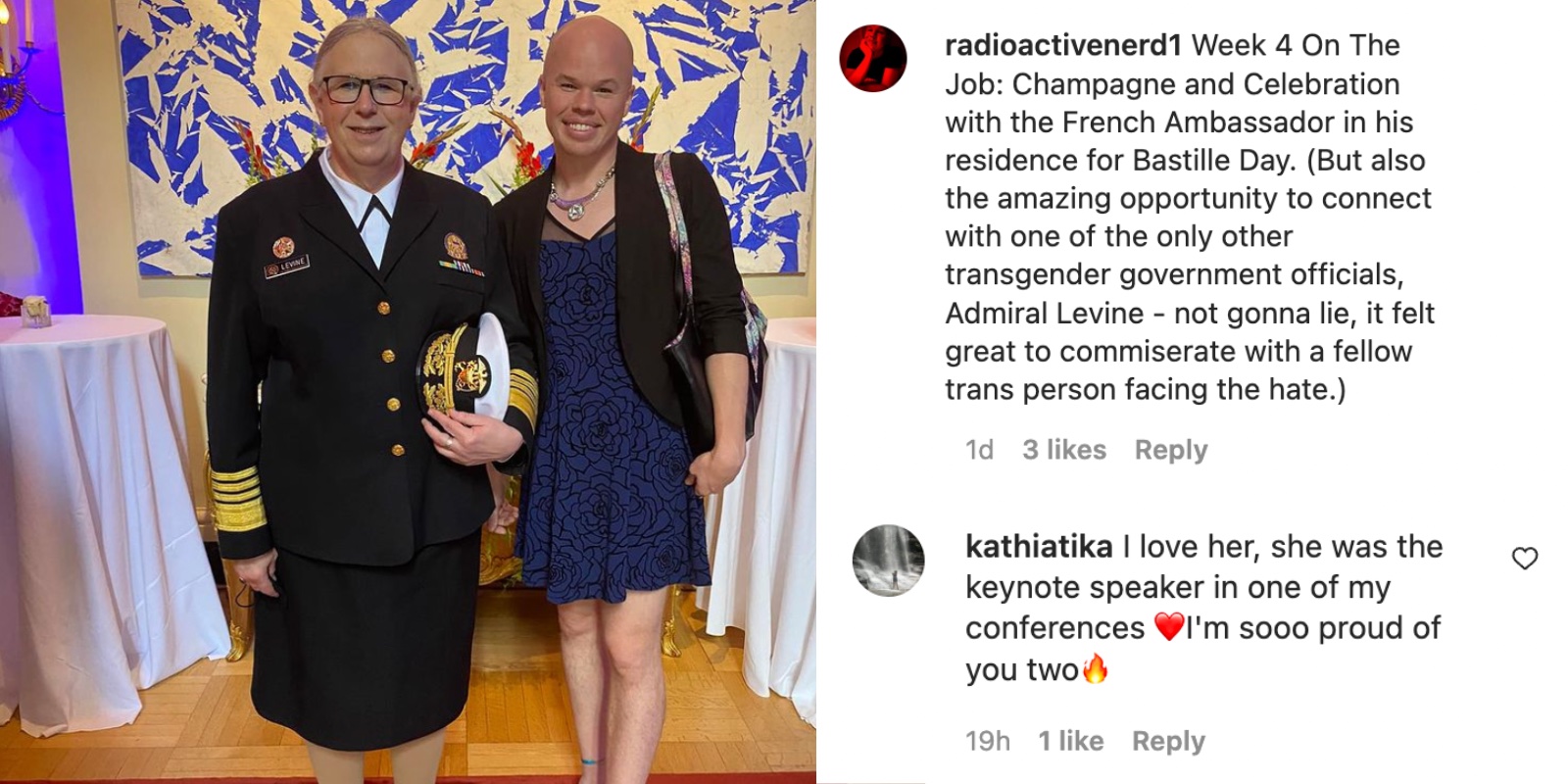 Sam Brinton, who serves as the Deputy Assistant Secretary for Spent Fuel and Waste Disposition and Dr. Rachel Levine, Assistant Secretary in the Department of Health and Human Services, celebrated their identities with the French Ambassador in his residence for Bastille Day this week.

While Levine sports an admiral's uniform, having been awarded the stars of a four-star admiral in the United States Public Health Service Commissioned Corps, Brinton wears a blue, floral patterned dress with a sweetheart neckline, blazer, and blue, strappy heels.

"Week 4 On The Job," Brinton reported, "Champagne and Celebration with the French Ambassador in his residence for Bastille Day. (But also the amazing opportunity to connect with one of the only other transgender government officials, Admiral Levine - not gonna lie, it felt great to commiserate with a fellow trans person facing the hate.)"

Both Brinton and Levine are biological males who have achieved positions of authority in the Biden administration and wear dresses, skirts, high-heels, and make-up, which are more stereotypically associated with women.

The pair's outing at the French ambassador's residence was noted on Twitter, with one user saying that the two Biden administration officials in ladies' garb were examples of "marginalised/oppressed/vulnerable" individuals.

The National Pulse's Raheem Kassam also took notice of the formal attire, noting that these are America's representatives in action.

The historic moment of seeing two, white, biological males, both diversity hires of the Biden administration and their ultra-transgender affirming policies, was met with adoration and celebration on Brinton's Instagram.

"So happy you got to experience this. I can only imagine how valuable this must be. I hope and wish that soon this will not be an issue anymore, just a connection from one person to the other. I believe you’re (both) doing a great deal to clear that path," comments one user.

While others just loved the shoes. "You and Admiral Levine are holding down the fort. And those blue pumps are to die for," said one user. Another wrote: "Rockin beautiful shoes Sam!"

Levine has been a notable addition to the Biden administration, after Levine's tenure as the top medical official in Pennsylvania during Covid. Levine pulled Levine's mother out of a nursing home right before implementing a policy that required nursing homes to accept Covid-positive patients after their treatment in hospitals for the virus.

Levine, who transitioned late in life, after a marriage to a woman and having fathered children, has been the cause of many high-profile Twitter bans for those accounts and users that have referred to Levine as male or as a man. Twitter classifies the referring of Levine as a man as hate speech and harassment. Charlie Kirk, The Babylon Bee, and Tucker Carlson are among those that suffered bans for referring to biological male Levine as male.