BLM, Antifa activists convicted of arson after attempting to frame Proud Boys for their own crimes

Wade was sentenced to five years in federal prison for the string of attacks carried out at the time he was out on bond for the Wendy's arson and wearing an ankle monitor. 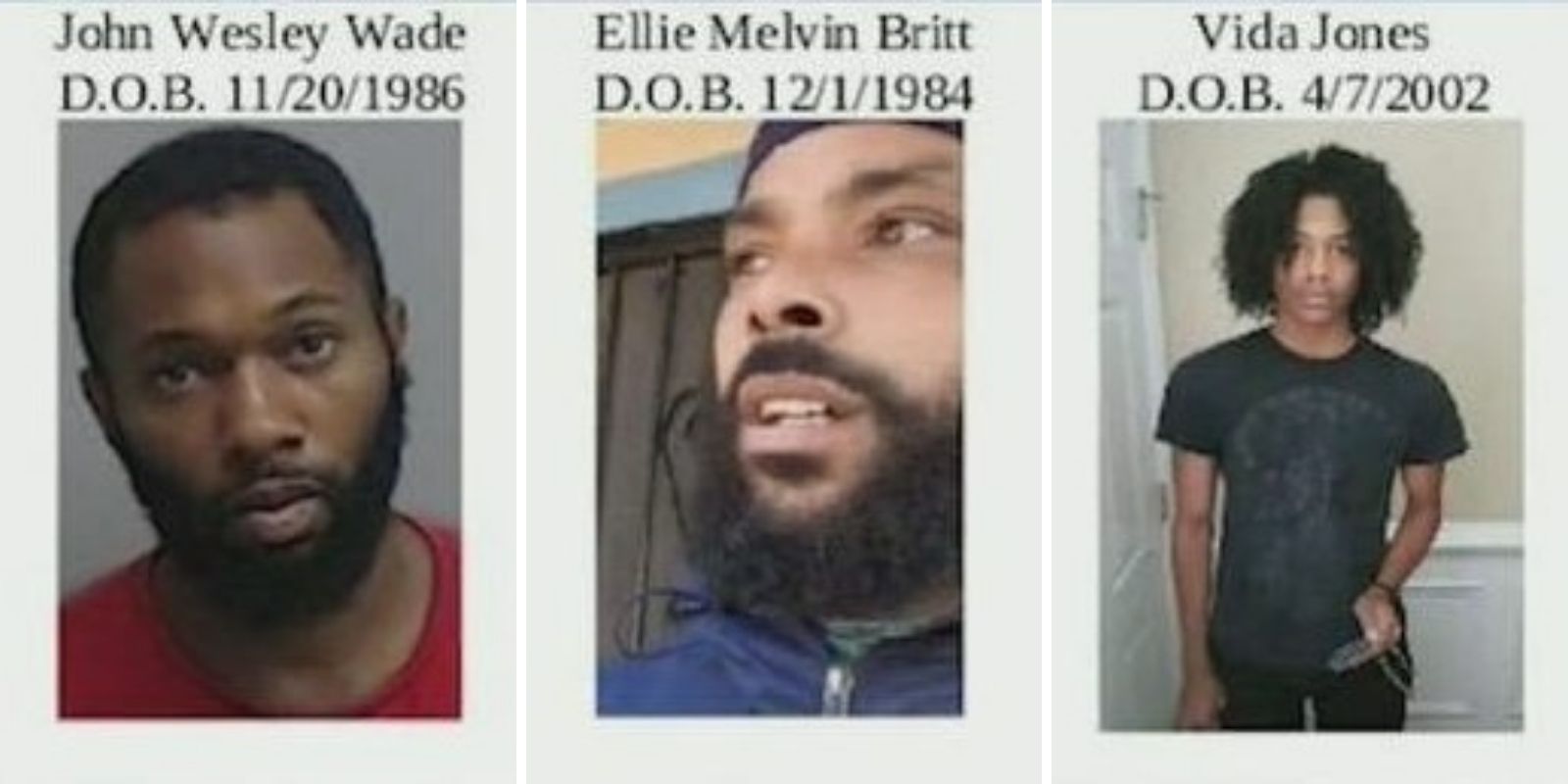 A group of Black Lives Matter and Antifa rioters were convicted on federal charges after attempting to frame the Proud Boys for a series of vandalism and arson attacks the far-left extremists carried out on Atlanta police vehicles and United States Postal Service property during the lead up to the 2020 presidential election.

John Wesley Wade, 35, Ellie Melvin Brett, 37, and Vida Jones, 19, were arrested in late October 2020 on federal charges in connection to the string of incidents.

The suspects tried to frame the Proud Boys by leaving notes near the sites of vandalism that read "Stand By," a reference to when former President Donald Trump told the right-wing group to "stand back and stand by" after he was asked to condemn white supremacist militias during the first 2020 presidential debate.

At around 12:50 am on Oct. 2, 2020, several fires were set at the West End Post Office located at 848 Oglethorpe Avenue. One fire was set within a bin of mail on the loading dock of the Post Office building itself, destroying much of the mail and damaging other property in the possession of the US Postal Service. The other fires damaged five USPS vehicles that were parked in the secure, enclosed parking area.

The attack was one of at least seven related arson and vandalism incidents directed at law enforcement, a bank, and other government entities that occurred around the Atlanta metropolitan area between Sept. 30, 2020, and Oct. 2, 2020.

At around 10:49 pm on Sept. 30, 2020, in the parking lot of a Walmart located at 835 M.L.K. Jr. Drive, the window of an Atlanta Police Department (APD) patrol vehicle was smashed with a brick with a note wrapped around it.

The APD Video Integration Center (VIC) captured video footage showing two males wearing dark clothing, masks, and hoods. One male was wearing a somewhat distinctive jacket that was darker on the top half than on the bottom half. The second male was wearing all black or a similarly dark color.

Law enforcement recovered the brick and note from the scene. The note mentioned Election Day and the date the Electoral College was to meet.

The note also included the phrase "stand by." The note's contents were similar to messaging depicted on an Instagram account (@nofaithlesselector) associated with Brett. According to the Oct. 27, 2020, criminal complaint, in one Instagram video, Brett, wearing the same two-tone jacket, stated: "Proud boys stand by."

At approximately 11:46 pm on Sept. 30, 2020, about an hour after the first incident, another brick with a note attached was thrown through the window of a Wells Fargo Bank at 240 Peachtree Street in Atlanta. The note on the brick referenced the Electoral College and again included the phrase "stand by." A finger print left on the note preliminarily matched with a known print of Wade's.

At around 1:33 am on Oct. 1, 2020, shortly after the second incident, the window of another marked APD vehicle parked outside a residence was smashed with a brick. The vandalism was a few blocks from the first incident. No note was left.

After the three brick incidents, the incidents escalated to include arsons the next night. The suspects filmed the fires and posted the videos to social media.

Within two hours after the fourth incident, several fires were set at the West End Post Office residing on Oglethorpe Avenue. The multiple fires damaged five USPS vehicles and destroyed mail in a bin on the post office's loading dock.

A camera recording the secure parking area captured footage of one of the vehicles as it was set ablaze by an individual wearing long pants. A second individual also wearing long pants was visible standing close by. Both appeared to be working together to set fire to the USPS vehicles parked in a row next to one another. One of the individuals then went to the loading dock carrying the container of  ignitable liquid while the other suspect continued to set postal trucks on fire.

Surveillance footage recording the loading dock filmed the individual appearing to pour liquid from the container into a large bin or bulk storage unit of mail. The container of liquid appeared to be red and may have been dropped into the mail bin fire and consumed in the blaze, the criminal complaint says.

According to the court documents, the suspects left in Brett's vehicle and headed towards a nearby Chevron gas station, minutes after the post office fires.

Surveillance footage inside the station showed an individual matching Jones's physical description and was wearing a red-and-black striped winter hat, dark clothing, and gloves that were black on the back and gray on the palm with distinctive markings. What appeared to be a portable Bluetooth speaker was affixed to the suspect's waist on his right side next to a dual-chain wallet chain.

The video from inside the Chevron station showed the individual identified as Jones purchasing a red gas container at approximately 1:00 am.

At about 2:30 am on Oct. 2, 2020, fire was also set to damage two East Point Public Works Department vehicles parked in a City of East Point parking area near 1659 Linwood Avenue and McGee Way in East Point, Georgia.

One of the vehicles, law enforcement recovered a brick that had been smashed through one of the car's windows. A note was found on the ground near one of the vehicles. In the top right corner of the note was a list of states next to their number of electoral votes. The note stated "*STOP the FAITHLESS ELECTOR vote in the WHITE HOUSE…and the FAITHLESS CHRISTMAS in the WHITE HOUSE;" cited several Bible verses, but misspelled Jeremiah as "Jerimiah;" and included the Instagram handle, "@NoFaithLessElector," associated with Brett.

City of East Point surveillance cameras captured footage of two individuals, believed to be Jones and Wade, walking through downtown East Point near the incident. In the footage, both, intermittently, appeared to be carrying a gas container consistent with the one purchased at the Chevron gas station.

Later on Oct. 4, 2020, an audio excerpt from the City of East Point Fire Department that documented the emergency response to the city vehicle fire was posted to the Instagram account "@sine.bra," believed to be used by Jones. The post on Instagram documenting the fires asked, "Where's the media coverage?"

Then around 3:11 am on Oct. 2, 2020, within an hour of the sixth incident, a MARTA Police vehicle was vandalized and set on fire at the West End MARTA station, which is about one block away from the West End Post Office.

The Base, a New York City-based Antifa anarchist group, had referenced Wade, Britt, and Jones as the far-left organization's "comrades in Atlanta."

"Our comrades in Atlanta are facing extreme, yet totally expected repression. Read about the situation, support the comrades and follow @atl_arc for more info," @TheBaseBK, a now-suspended account, wrote in a Twitter post on Nov. 10, 2020.

Brett pled guilty and is set to be sentenced on March 22. Jones, who also pled guilty, has a sentencing hearing scheduled for several days later on March 25.

Wade was sentenced to five years in federal prison Monday on federal arson charges. He was subject to GPS ankle-monitoring at the time of the attacks when he was released on bond for burning down the Wendy's location in Atlanta, Georgia, where Rayshard Brooks was shot by the Atlanta Police Department.

GPS data from Wade's ankle monitor showed that his location was consistent with the time and place the incidents occurred, according to the court documents.

Any sentence that stems from the prior Wendy's arson case will not run concurrently, according to Monday's sentencing guidelines for Wade.

The Fulton County District Attorney had announced back in January that Wade and two other suspects were indicted for setting fire to the Wendy's restaurant located on University Avenue in southwest Atlanta on June 13, 2020.

Almost two full days after the shooting death of Brooks, a large group of protesters had gathered around the Wendy's franchise. Just after 9:30 pm, flames could be seen shooting out of the closed restaurant. Atlanta Fire Department officials said that the fire started in multiple locations using multiple incendiary methods and devices and that there were at least 10 attempts to set the building on fire.

At least 36 suspects were arrested that evening with Wade apprehended on July 2, 2020, before he was bonded out following the initial arrest, Fox 5 Atlanta reported.