What a 3- to 5-year-old is supposed to see in themselves reflected in these flags representing pansexuals, lesbians, bisexuals, asexuals, gender fluid, transgender, and others, is uncertain. 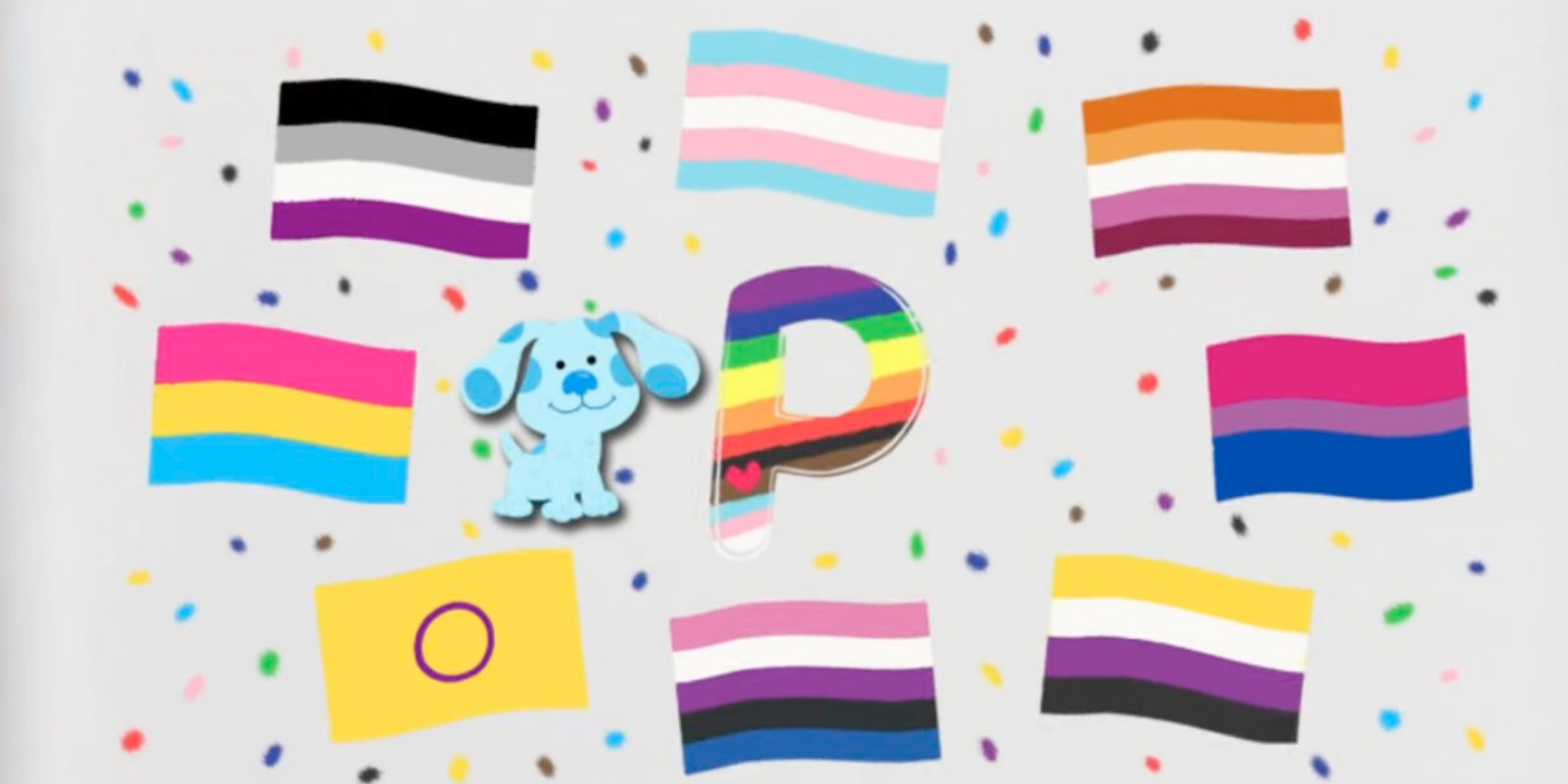 "P is full of Pride," or so a new Blues Clues, a long-running educational cartoon show on Nick Jr., for kids age 3 to 5, declared in a new alphabet song. The song featured a screen filled with various LGBT-adjacent pride flags with Blue, the helpful puppy, smiling next to the letter P, filled in with the new LGBT flag, complete with black, brown and trans stripes.

Sammi Chan, an animator for Nick Jr., tweeted out in excitement, "The first thing that came to my mind was P is for pride when I got the script. I am so excited that all of ya'll are as happy as I am! I also did all the letters and graphics for this episode to be as inclusive as possible for Black History Month! #PRIDE #BluesClues #LGBTQIA"

Chan posted this over a comment declaring "Blue says LGBT rights!' and LGBTQ Nation gushed over the display declaring, "It's never too early for kids to learn to be proud just for being themselves."

However, what a 3- to 5-year-old is supposed to see in themselves reflected in these flags is uncertain. The image contains eight separate LGBT-adjacent flags representing pansexuals, lesbians, bisexuals, asexuals, gender fluid, transgender, nonbinary and intersex identities.

It's not clear if the creator just grabbed a random assortment or put any real thought into the selection, but absolutely none of them make sense for this particular age group. I had to google them myself to figure out which was which and I am certain parents of curious children did too.

How do you explain to a 3- to 5-year-old child they must have pride in themselves as someone with no sexuality at all or possibly someone with all the sexualities combined? Is your pre-schooler nonbinary or gender fluid? Perhaps your 4-year-old son could be a transgender lesbian and just doesn't know it yet. Thank goodness for this educational material!

Searching for "Blues Clues" on Twitter now reveals a cornucopia of Tumblr-style fan art of Blue, the puppy who helps educate your children, frolicking with all manner of LGBT pride symbolism, with a wide array of Blue, who is a girl, with her own girlfriend, another character on the show named Magenta, who is pink, who wears a trans pride hair bow while Blue wears a demisexual pride bracelet. Demisexual, if you don't know, means you're only sexually attracted to people you're emotionally bonded with. Certainly, a concept important for pre-school kids to understand.

One commenter celebrated, "Let me contribute to #BluesClues tag! Blue's clues was my childhood and I'm so proud of the LGBTQ+ inclusion in that recent alphabet song Rainbow flag. Also Blue & Magenta are lesbians ya can't change my mind #pride."

Featuring the two puppies with "Gay Rights" in rainbow letters above them. It seems pretty obvious that similar to My Little Pony, young adults have decided the cartoon is their own, turning it into an adult expression of personal identity.

Once again, adults are the ones making decisions about what should matter to children based on their own insecurities and longing for personal validation. They have taken an innocent representation of childhood curiosity and learning and deformed it into a vessel for all of their own narcissistic obsessions with gender and sexuality.

Under the guise of "inclusion" and inspiring acceptance, they alienate the only audience that should matter. The creator's "first thought" was LGBT Pride, which tells you her focus is on activism and not education.

There is a valid argument for including same-sex parents in children's cartoons as background characters or perhaps even connected to the main character. This allows children to see the normalcy of what they'll actually experience in regular life.

It doesn't need to be a storyline itself or explained. Inclusion would mean representing common families in the daily activity of the child characters. But why introduce children to a series of adult sexual and gender identity concepts with bright colors and cheerful animation? The only purpose is indoctrination, forcing them to be exposed to ideas only important to a small but aggressively evangelical minority who believes they are morally obligated to do so.

While I am sure we will see a stream of mocking and shaming articles declaring conservatives "outraged" over an innocent little pup just sharing LGBT inclusion with kids, it should be noted that rational and reasonable adults should absolutely find this to be a line crossed. An activist shouldn't have this much influence over what should be a pretty neutral and safe cartoon.

Does the voice of the parent matter at all or does Nickelodeon believe they are charged with "educating" your child on whatever any given leftwing activist thinks is important? Pre-schoolers don't need to be engaged in LGBT pride or "gay rights" or associating brightly colored flags with complex sexual and gender concepts. Kids shows shouldn't be platforms for political and social activism at all.