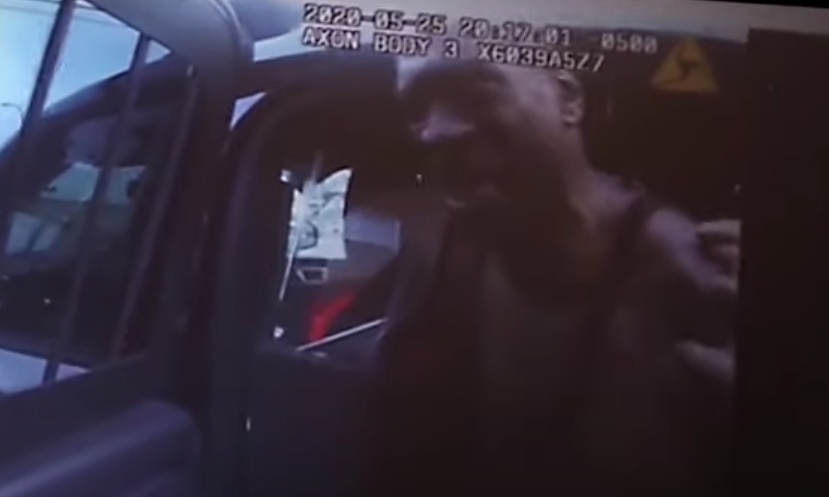 British newspaper the Daily Mail has published "leaked" police officers' bodycam videos of George Floyd's arrest and death. The Minneapolis Star-Tribune reports that the "videos were made available in July by appointment for public viewing, but were not supposed to be recorded or publicly distributed."

On the newly leaked bodycam footage from Officers Thomas Lane and Alex Kueng, who were the first officers on the scene, Floyd appears to be intoxicated and states that he is claustrophobic.

The video shows him resisting arrest before eventually being pinned down on the road by former police officer Derek Chauvin.

Floyd was approached while he was seated in his car, and can be heard pleading with officers not to shoot him, stating that he had been shot before.

Lane told Floyd "I'm not going to shoot you."

Lane asked other occupants of the car why Floyd was "getting all squirrelly and not showing us his hands and just being all weird like that?"

Lane asked passengers if Floyd was "drunk or something."

A passenger, identified as Shawanda Hill, said "No, he's got a thing going on."

Lane and Kueng remove Floyd to a police car with difficulty. "Stand up. Stop falling down. Stay on your feet and face the car door," Kueng said to Floyd.

Another person, who is believed to be Floyd's girlfriend, can be heard saying "stop resisting."

It was after additional officers, Derek Chauvin and Tou Thao, arrived on the scene that Floyd removed himself from the police car.

"My stomach hurts. My neck hurts. Everything hurts. I need some water or something, please," Floyd cried as Chauvin pinned him to the ground. He also stated "I can't breathe."

"Then stop talking. Stop yelling. It takes a heck of a lot of oxygen to talk," said Chauvin.

A fellow officer asks if Floyd should be moved and Chauvin responds, that he is "staying where we've got him." An officer suggested that Floyd be turned over.

This was the moment when Officer Derek Chauvin kneeled on his neck for nine minutes and thirty seconds and George Floyd died.

It is likely, noted the Minneapolis Star Tribune, that the videos were recorded during an appointment viewing inside the Hennepin County Courthouse via cell phone.