Posobiec's comment was "No one told him to go. He went anyway." The fact-check was posted on the photo, despite no claims being made other than that Trump was there. 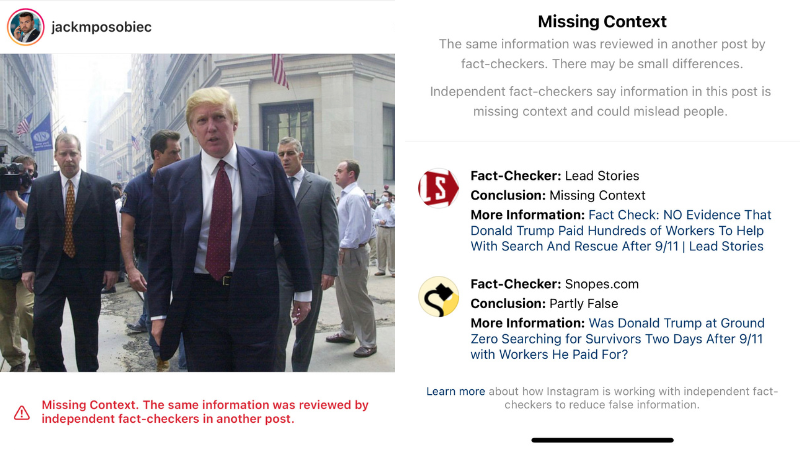 In honor of the 21st anniversary of the attacks on the World Trade Center, Human Events Daily's Jack Posobiec posted a photo of Donald Trump visiting Ground Zero in 2001. In response to the Instagram post, showing Trump at that horrific scene so many years ago, Instagram posted a "fact-check," reading: "Missing Context. The same information was reviewed by independent fact-checkers in another post."

Posobiec's comment was "No one told him to go. He went anyway." The photo is credited to Getty Images. The fact-check was posted on the photo, despite no claims being made other than that Trump was there. Instagram's parent Meta's algorithms appear to be looking to discredit Trump, even when there is nothing to discredit. 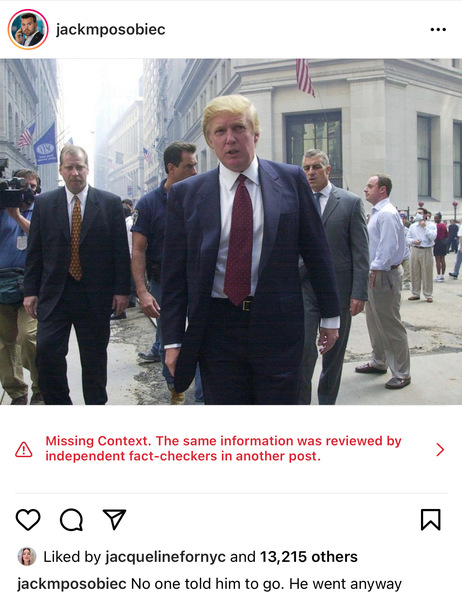 Opening up the message brings readers to a fact-check showing two fact checks. Lead Stories says that the conclusion of their fact check is that the post has "missing context," by which they explain that there is "No evidence that Donald Trump paid hundreds of workers to help with search and rescue after 9/11." This is a fact check on a photo showing Trump at the site of the terrorist attack in 2001. It made no claims other than that he was there, which he was.

A fact-check from Snopes states that their conclusion is that the post is "partly false," giving as "more information" the question "Was Donald Trump at Ground Zero searching for survivors two days at 9/11 with workers he paid for?" This on a fact-check of a photo which made no additional claims. Snopes' rating as to whether or not Trump brought employees down to Ground Zero is recorded as "unproven."

It was years later that a meme, using the same Getty photo, began circulating that was captioned: "2 days after the September 11th attacks Donald Trump was at ground zero with hundreds of workers that he payed for, to help find and identify victims."

Trump visited Ground Zero on September 13, 2001, two days after the attacks. According to The New York Times, Trump had said "Many of those affected were firefighters, police officers and other first responders. And I was down there also, but I’m not considering myself a first responder. But I was down there. I spent a lot of time down there with you" at a speaking event years later. Others said he wasn't there for extended periods of time.

Trump said in 2001 that "I have a lot of men down here right now. We have over 100 and we have 125 coming. So we’ll have a couple of hundred people down here.” He added: "We will be involved in some form helping to reconstruct."

The reconstruction efforts were led by the City of New York, and Larry Silverstein, who was the existing developer of the property.

At a 2016 speaking event in Buffalo, NY, Trump said "Everyone who helped clear the rubble — and I was there, and I watched, and I helped a little bit — but I want to tell you: Those people were amazing. Clearing the rubble. Trying to find additional lives. You didn’t know what was going to come down on all of us — and they handled it."

Trump was a private citizen in 2001, a native New Yorker, and a local businessman.