“As an environmental policy, the carbon tax is by every possible measure and projection, a failure of epic proportions. It makes virtually no contribution to the global fight against climate change and it only makes life more expensive for Canadian families and small businesses,” said Scheer. 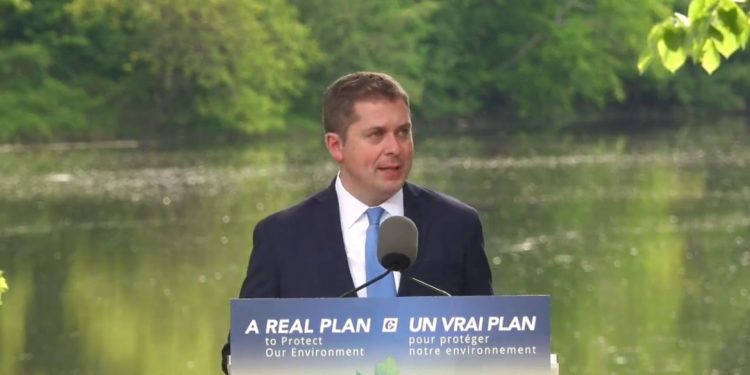 “This plan is the most comprehensive environmental platform ever put  forward by a political party in Canada – far surpassing anything Justin  Trudeau put out before the 2015 election,” said Scheer about the plan.

“Climate change is real. And it represents a serious threat to not only to Canada, but to the entire planet.”

The plan, which seeks to incentivize the private sector to reinvest funds into green energy and research seeks to remove the need to pay environmental taxes to the government.

Under the Conservative plan it will not be free to pollute, said Scheer.

“Rather than simply funnelling money to the government as the Liberal plan dictates emitters who exceed our limits will be required to invest in technology that will lower emissions to fight climate change.”

Scheer also introduced a green home tax credit for those who choose to retrofit their home with environmentally friendly technology/upgrades as well as a credit for innovators who patent new green technology.

Three key principles are central to the Conservative policy on the environment:

“The fact is Canada will not make a meaningful contribution to fighting climate change by focusing only in our own emissions. We have to look beyond our borders,” said Scheer.

The plan reveal comes shortly after the Liberal government announced both a climate emergency and the approval of the Trans Mountain Expansion pipeline in the very same week.

“As an environmental policy, the carbon tax is by every possible measure and projection, a failure of epic proportions. It makes virtually no contribution to the global fight against climate change and it only makes life more expensive for Canadian families and small businesses,” said Scheer.

The Liberals have criticized the Conservatives for allegedly ignoring science and giving into oil lobbies and corporate interests.

“The Conservatives have become captive to oil lobbyists. Mr. Scheer and his campaign director met this spring with a handful of oil  lobbyists in a luxury resort in the Alberta foothills, to plan the  federal party’s campaign together,” said Minister of the Environment Catherine McKenna.

The full Conservative climate plan can be read online here.