"For those remaining Americans, there is no deadline. We remain committed to get them out if they want to come out." 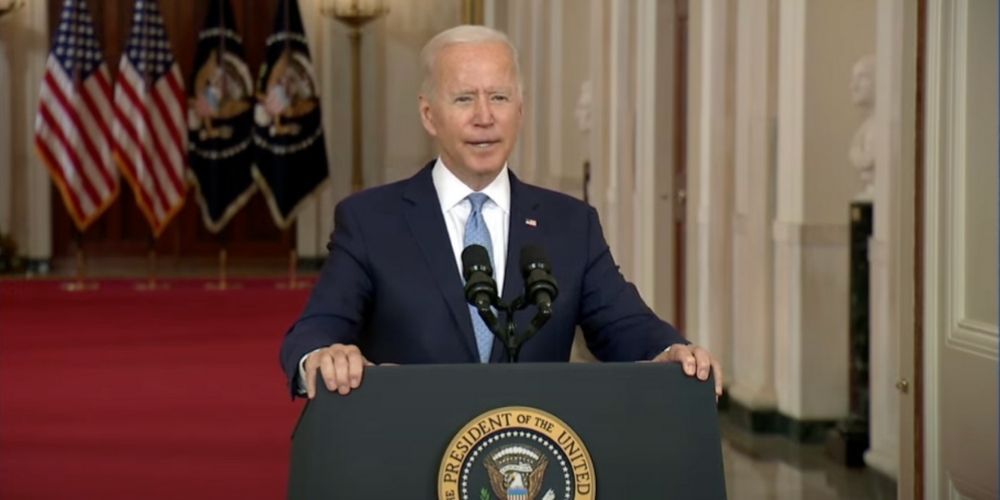 Just one day after the last of US troops left Afghanistan, President Joe Biden addressed the nation on the situation within Afghanistan including his plans to remove the remaining Americans from the country, taking a moment to slam former President Donald Trump in the process.

Biden applauded his administration's success in ending "the longest war in American history," adding that "we completed one of the biggest airlifts in history, with more than 120,000 people evacuated to safety."

"That number is more than double what most experts thought were possible," Biden continued. "Only the United States had the capacity and the will and the ability to do it, and we did it today."

In regards to the August 31 withdrawal deadline, Biden stated that the "assumption was that more than 300,000 Afghan national security forces that we had trained over the past two decades, and equipped, would be a strong adversary in their civil wars with the Taliban."

"That assumption, that the Afghan government would be able to hold on for a period of time beyond the military drawdown turned out not to be accurate," Biden added.

Biden claimed that the military was ready for all events that may occur, even the case of the Afghan military and government folding, and that he had planned for all contingencies.

He stated that his administration reached out to Americans within Afghanistan 19 times since March with warnings about the situation in the country and about evacuations.

Of the 120,000 people evacuated from Afghanistan, Biden said around 5,500 were Americans. He assured the nation that they were able to get 90 percent of Americans out that wanted to leave, noting that many Americans who stayed are dual citizens of both countries and have deep roots in the war-torn nation.

He assured the public that troops and officials were working around the clock to get Americans out of the country, noting that sometimes Americans were walked by troops to the airport.

Biden addressed the timeline of the evacuations, blaming it in part on a deal signed by former President Donald Trump that looked to get troops out of Afghanistan by May 1.

"Let me be clear. Leaving August 31 is not due to an arbitrary deadline. It was designed to save American lives," Biden said.

"My predecessor, the former president, signed an agreement with the Taliban to remove US troops by May 1, just months after I was inaugurated," said Biden.

Biden noted that the agreement did not include a requirement for the Taliban to work out a "cooperative government arrangement" but authorized the release of "5,000 prisoners," many of whom were affiliated with the Taliban and aided in taking over the country.

Biden added that when he came into office, the Taliban was at its largest military strength since 2001.

Biden said he was left with a simple decision from the previous administration. Either leave by May 1, under the previous agreement that stated the Taliban wouldn't attack US forces if they left, or stay in Afghanistan and "commit another  tens of thousands more troops."

"I take responsibility for the decision," said Biden slamming the critics of his withdrawal efforts.

"There still would have been a rush to the airport. A breakdown in confidence and control of the government." said Biden, referring to if these evacuations had been held in June or July. He left without taking questions.