Reps. Marjorie Taylor Greene and Matt Gaetz joined other members of the Republican Party in protest over the treatment of those arrested and held following the January 6 riot. 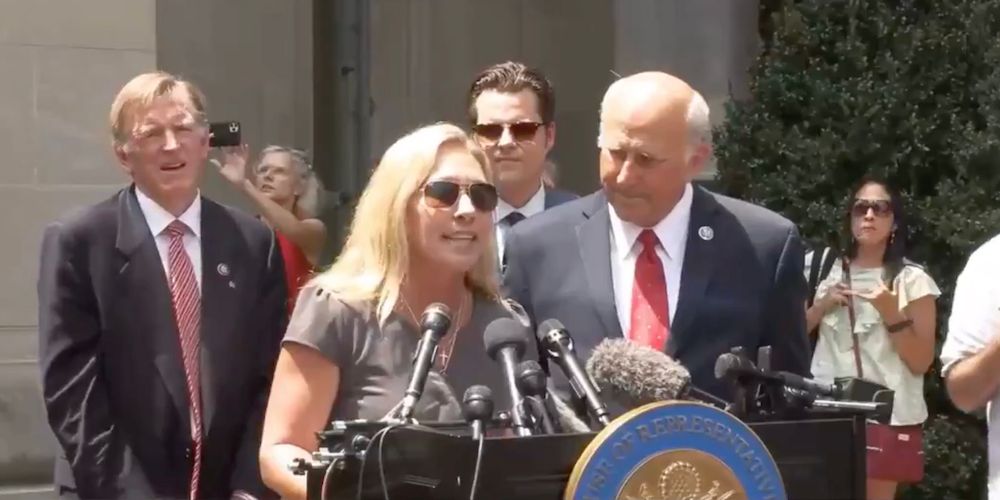 Republican House representatives gathered outside the DOJ to protest the treatment of Jan. 6 riot prisoners, but were promptly shut down by a group of leftists.

On Tuesday afternoon, Reps. Marjorie Taylor Greene and Matt Gaetz joined other members of the Republican Party in protest over the treatment of those arrested and held following the January 6 riot.

The group had set up outside the Department of Justice, and were peacefully giving speeches when counter-protestors surrounded them.

Throughout the protest, someone can be heard blowing a whistle repeatedly in efforts to drown out the speeches being given.

"We will not back down," said Greene. "We will not stop asking questions. We are looking for the truth."  As she continued speaking, the crowd of counter-protestors got louder and began to move in, forcing the Republicans to shut down the event.

Organizers were quick to point out that it was the left who shut them down. "They hate free speech!" one man said.

The protest comes on the first day of hearings for the January 6 select committee, in which 4 members of law enforcement testified. The committee had been intended to be a bipartisan affair, but after Reps. Jim Banks and Jim Jordan were struck from committee by House Speaker Nancy Pelosi, the committee packed less of a bipartisan punch.