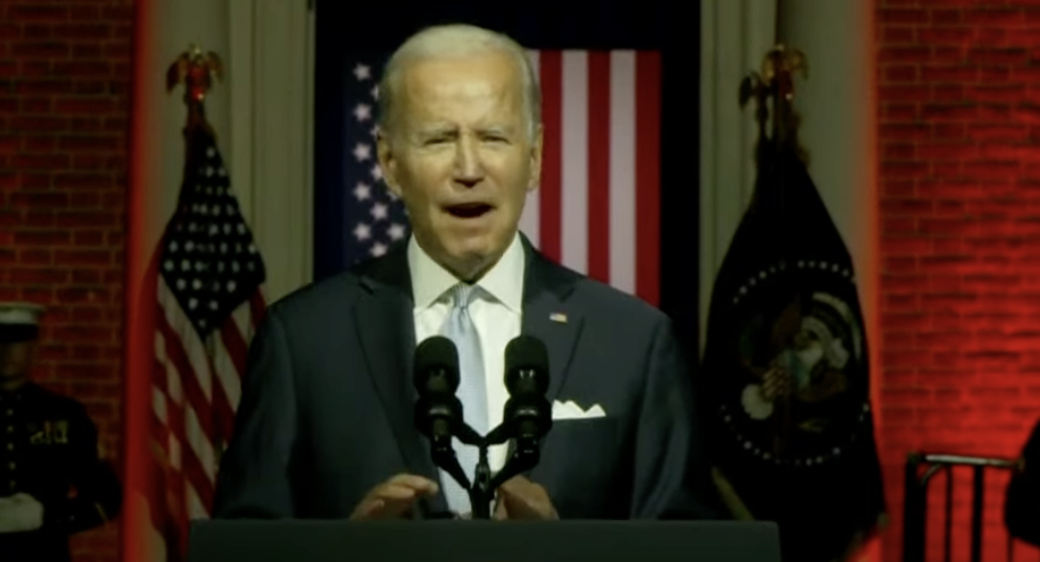 On Thursday evening, President Joe Biden delivered his first primetime address to the nation in months, using the speech to attack the Republican Party with nearly two months until voters hit the ballot box nationwide in their states’ respective primaries.

Speaking from Independence Hall in Philadelphia, Biden said, "as I stand here tonight, equality and democracy are under assault."

"We do ourselves no favor to pretend otherwise. So tonight, I’ve come to this place where it all began to speak as plainly as I can to the nation about the threats we face, about the power we have in our own hands to meet these threats," said Biden.

Biden told the crowd that too much of the current events in America are "not normal."

Biden conceded that not every Republican is extreme or embraces the "extreme ideology" of MAGA Republicans.

"But there’s no question that the Republican Party today is dominated, driven, and intimidated by Donald Trump and the MAGA Republicans," said Biden.

Biden said that his "duty" as president to "tell you the truth," stating that "MAGA republicans do not respect the Constitution, they do not believe in the rule of law, they do not recognize the will of the people. They refuse to accept the results of a free election."

Noting January 6, Biden said that MAGA Republicans see their "failure to stop a peaceful transfer of power after the 2020 election as preparation for the 2022 and 2024 elections," and that they had tried to nullify the votes of 81 million voters.

"It’s Donald Trump and the extreme MAGA Republicans voted clear and present danger to our democracy."

"MAGA Republicans have made their choice. They embrace anger. They thrive on chaos. They live not in the light of truth but in the shadow of lies," he said.

Biden stated to the crowd that America is a nation "that rejects violence as a political tool."

"Tonight I’m asking our nation to come together, unite behind the single purpose of defending our democracy regardless of your ideology."

Biden said be want be "pro insurrectionist and pro American. It’s incompatible. We can’t allow violence to be normalized in this country."

"We have to reject political violence with with all the moral clarity and conviction this nation can muster. Now. We can't let the integrity of our elections be undermined. For that is a path to chaos."

Amidst Biden’s speech, a bullhorn was heard from the background, with a man shouting "Let’s go Brandon," the popular play on the chant "F*ck Joe Biden."

After slamming and condemning Republican voters, Biden moved on to toting his achievements in the last year and a half’s rating that America’s economy is "growing faster, stronger than any other advance nation in the world," despite the country facing record levels of inflation.

He also toting his Infrastructure bill passed last year, his gun safety bill, healthcare reform, and climate initiatives that have been passed.

"Look, I know the last year a few years have been tough. But today Covid no longer controls our lives. More Americans are working than ever. Businesses are growing our schools are open. Millions of Americans have been lifted out of poverty. Millions of veterans once exposed to toxic burn pits will now get what they deserve for their families in compensation. American manufacturers come alive across the heartland and the future will be made in America," he said.

"No matter what the white supremacists and extremists say, I made a bet on you the American people and that bet is paying off proving that from darkness, the darkness of Charlottesville, of Covid, of gun violence, of insurrection. We can see the light light is now visible," he said.

Biden stressed that "we’re in a battle for the soul of this nation," and that he;’s building a nation "where no one is left behind."

With two months remaining before the primary election, Biden stressed to the nation that they need to get out and "vote, vote, vote."