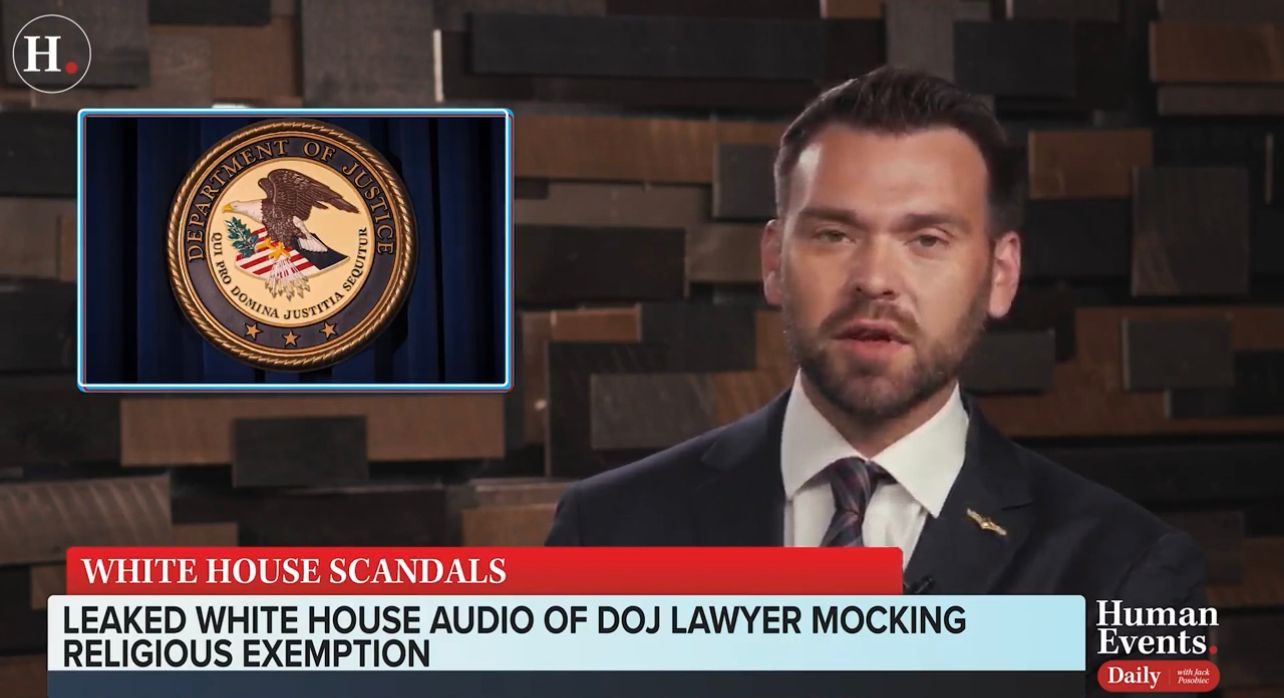 Human Events senior editor Jack Posobiec broke the news on Human Events Daily, exposing the Biden administration's complete disregard for Americans' religious liberty rights. DOJ attorney Marty Lederman can be heard on a phone call from September advising the administration as to how to combat employees religious exemption demands from the vaccine mandate.

In the leaked call, Lederman advises that in "cases, for instance in the New York case that's currently going on against the State of New York, the Thomas More Society is representing a bunch of doctors and nurses who claim that they would sin gravely in cooperation with the evil of abortion. How would they be doing so? The claim is that all three of the current vaccines, either have fetal cells that were obtained by abortions in the vaccine itself, or in the case of Pfizer and Moderna that those vaccines were tested using fetal cells that had been aborted, and even the connection to the previous testing, makes them cooperative with evil in a way that their religion prohibits.

"I don't want to say anything too categorical but I believe that this claim will be very difficult for agencies to successfully claim that's either insincere or not religious, even if it is. Even if we know that many of those claims are not sincere, or are sincere but not religions, this is the most common behavior you're going to confront probably, and it's likely that you will have to take as a given the employee's claim.

"Not always, right, but one response that some hospitals have started to give is, 'well do you know that Tylenol, and Tums, and Preparation H, those were all tested using aborted fetal cell lines, too.' And I expect that employees will then say 'well I didn't know that, but now that you tell me that and I'll stop using those products as well.'

"And then we will turn to the, 'what does the government have to do once the employee makes that shown.' And here, basically there is a compelling interest, obviously, in keeping our workforce and the public with which we interact safe from COVID."

The issue of abortion and Catholicism has been hotly contested since Biden took office, since the Catholic president has claimed that he is pro-abortion. The Washington Post went so far as to say that Catholics who oppose abortion are "right wing."

When asked about the President's stance on abortion, White House Press Secretary Jen Psaki claimed that his faith was personal, and could not answer as to how he reconciled his religious views with his progressive, pro-abortion stance.

"Joe Biden is a strong man of faith and as he noted just a couple of days ago, it's personal. He goes to church nearly every weekend. He even went when we were on our overseas trip. But it's personal to him, he doesn't see it through a political prism, and we're not going to comment on the inner workings of the Catholic Church," Psaki said. This after some US Catholic Bishops called for the president to be denied the Eucharist on account of his public pro-abortion position.

In addition to seeking to undermine Americans' religious liberty as regards choosing whether to take the vaccine or not, this administration has sought to force Catholic hospitals to perform sex-change surgeries and treat gender dysphoric patients with "gender-affirming" care.