The Lincoln Project posted the names and contact info for two attorneys who are assisting with the legal battles to make sure every legal vote in Pennsylvania is counted. 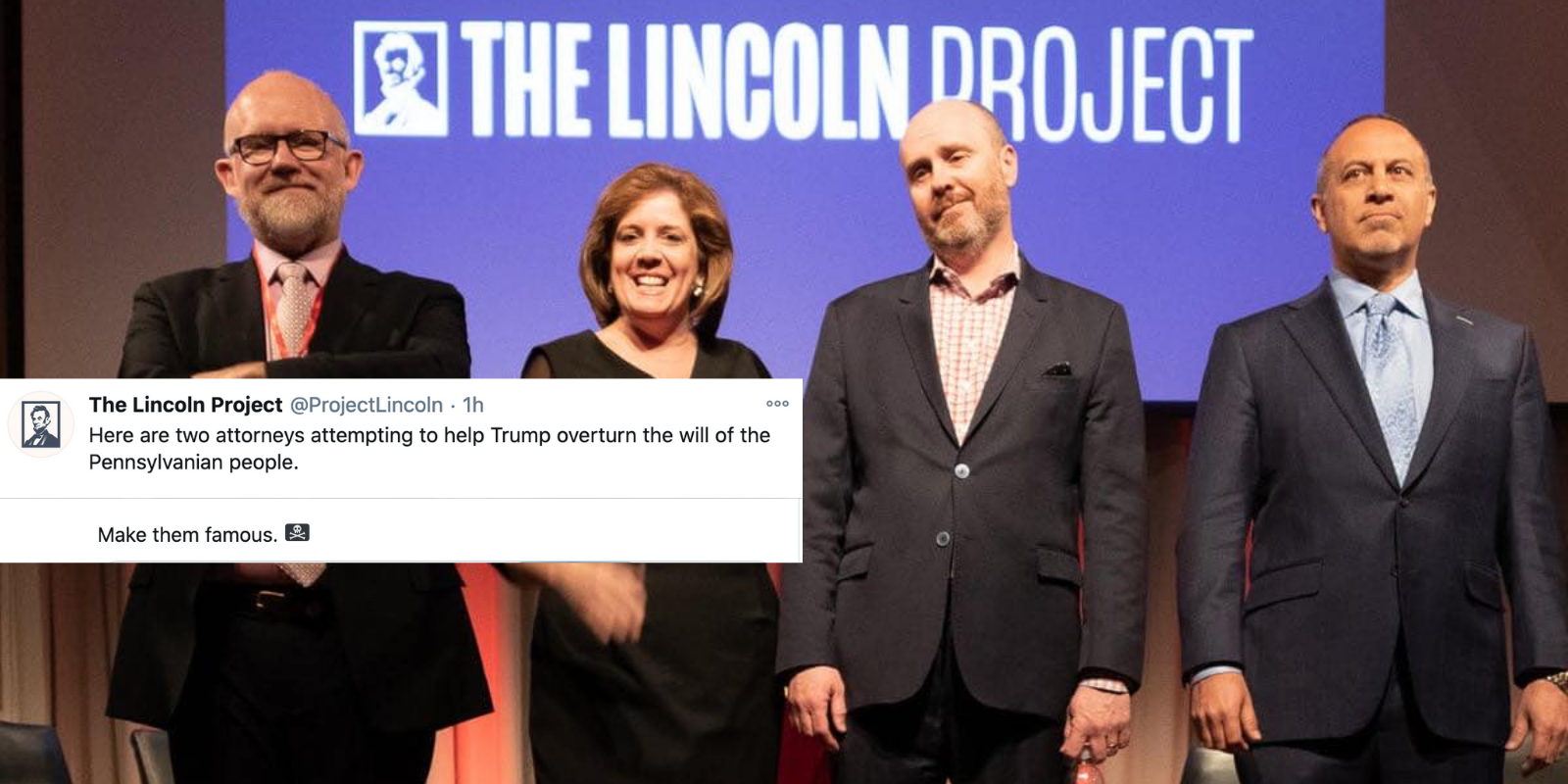 The Lincoln Project is doxxing people for doing their jobs. On Tuesday, they posted the names and contact info for two attorneys who are assisting with the legal battles to make sure every legal vote in Pennsylvania is counted.

They listed two attorneys, posted their photos, phone numbers, and wrote "Here are two attorneys attempting to help Trump overturn the will of the Pennsylvanian people."

"Make them famous," they wrote, along with a skull and crossbones emoji.

The Lincoln Project, which uses as its slogan "You cannot escape the responsibility of tomorrow by evading it today," was founded as a joint effort between never-Trump Republicans and leftist Democrats, who wanted desperately to see Trump out of office.

They have released ads in opposition to Trump, exhibited their Trump Derangement Syndrome on national television, run numerous articles to proclaim "orange man bad." Now they are going after those who have worked with Trump, and those who continue to work in the interest of ensuring the integrity of the US election.

The goal in releasing their names is to hurt these attorneys. By spreading their names and contact info on Twitter, the Lincoln Project wants to make life difficult for the lawyers who are doing their jobs in Pennsylvania, their colleagues, their families, and their friends.

That is the only reason to dox someone. Doxxing is a means to punish people you don't agree with, and the Lincoln Project stepped out on Twitter and said, basically, we don't agree with the continuance of lawsuits in Pennsylvania, and we think anyone who is working on those suits should be punished for it.

The Lincoln Project can't touch Trump—though they've tried— so their only avenue to hurt him is to hurt his supporters, to cow them into backing down from their work so that Trump doesn't have anyone willing to pursue the case.

This is just the latest attempt by anti-Trump conservatives and their allied Democrats to hurt those who have worked with or supported US President Donald Trump. A blacklist of those who worked in the Trump administration has been compiled by the Trump Accountability Project, and was touted by New York Congresswoman Alexandria Ocasio-Cortez.

CNN's Jake Tapper cautioned that there would be consequences for Trump supporters, and that those defending the lawsuits should beware of what future employers might think.

The Lincoln Project has been so obsessed with delegitimizing Trump and ending his presidency that they are willing to forego any principal they may ever have imagined they had in order to wound the president, those who worked with him, work with him still, or were even in support of the democratically elected American president.