The post read "The Kyle Rittenhouse Turkey Shoot video game is LIVE! Play it now and own the libs at http://RittenhouseGame.com" and the account was said to have violated their "rules against glorifying violence." 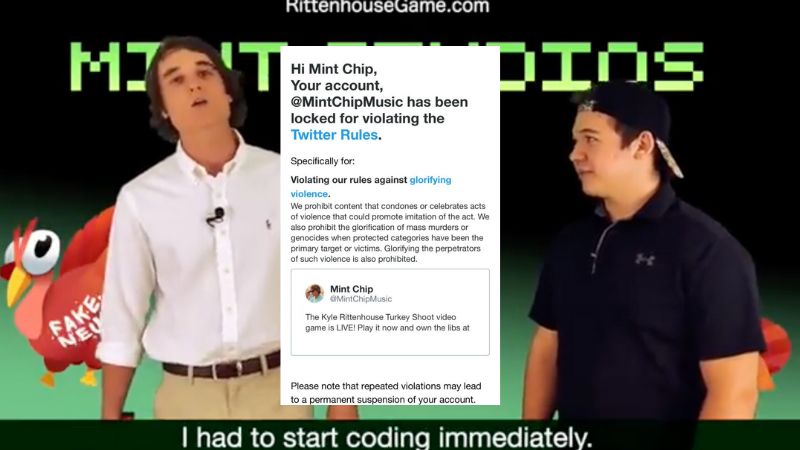 The post read "The Kyle Rittenhouse Turkey Shoot video game is LIVE! Play it now and own the libs at http://RittenhouseGame.com" and the account was said to have violated their "rules against glorifying violence."


In the game, which is linked via the tweet, a cartoon version of Rittenhouse can be seen shooting turkeys in various cartoon settings with a laser gun. The turkeys are labeled with words such as "MSDNC" and "Fake News."

The original tweet had an accompanying video, which can be found on the game's website, and featured Mint Chip, of Mint Chip studios and the developer of the game saying, "When I saw how these fake news turkeys operated, I had to start coding immediately. Gamers will get to play as Kyle Rittenhouse using a highly specialized laser gun to strike down any turkey that spreads lies, propaganda, or liberal bias."


In November of 2021 Rittenhouse was found not guilty on all charges related to an incident that saw him use an AR-15 to defend his life during a Black Lives Matter riot.

In a statement to The Post Millennial, MintChipMusic said: "The left is just mad that the Kyle Rittenhouse turkey shoot video game is so good and makes fun of their fake news,” said Mint Chip. “The goal of Mint Studios is to make games that spread joy, love, and beauty.  That’s what offends libs the most and why they reported my tweet.  They couldn’t handle how handsome I looked in the video.  Also, whoever locked me– Elon is going to find you and terminate you, lib.”