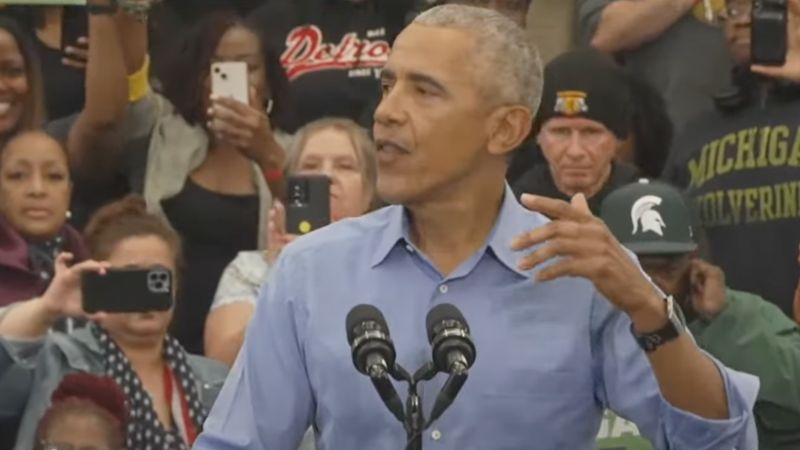 As Obama was talking about stopping "dangerous" rhetoric ahead of the election, one man shouted "Mr. President! There’s more people that are going to get hurt if we go into nuclear war!"

As Obama attempted to regain control of the crowd, which had begun to shout "Obama," the man continued on to demand that he "tell the truth."

"This is what I mean, I mean we’re having a conversation — sir, this is what I’m saying. Look, we’ve got a — there’s a process that we set up in our democracy, right now I’m talking, you’ll have a chance to talk sometime soon," Obama said, adding that "we don’t need to shout at each other."

"Yeah but we’re on the verge of nuclear war," the man said. "Do you care about the lives of your supporters?"

"Will you tell the truth before the world walks into world war?"

The man was soon after escorted out of the room.

Soon after the heckler was removed, another woman from the crowd shouted, "You overthrew Ukraine in 2014."

"You overthrew the legitimate Ukraine in 2014. Tell us about your plans for nuclear war with Russia," she shouted.

As she shouted, one woman from the crowd yelled in return, "Russia is the enemy," to which she said, "Russia is not the enemy."

"Stop getting us into nuclear war with Russia," she continued. "No nuclear war," she added, shouting about Victoria Nuland, who served as Assistant Secretary of State for European and Eurasian Affairs under the Obama administration.