The two were handcuffed to the fence for around 10 minutes before they were escorted away by officers, with their hands now handcuffed behind their backs. 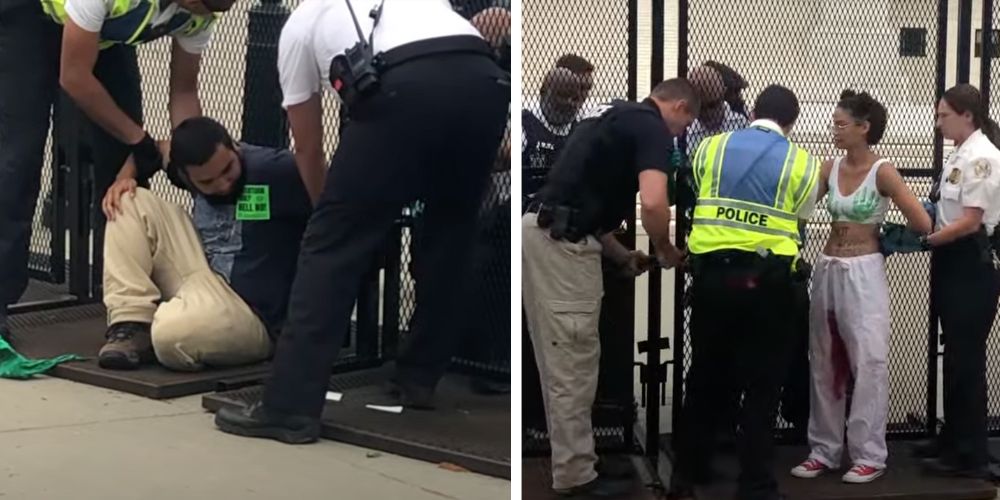 On Tuesday morning, two pro-abortion activists were arrested outside the Supreme Court after they chained themselves to the non-scalable fencing that has been erected in anticipation of the Dobbs v. Jackson Women’s Health decision.

One man and one woman were arrested after they handcuffed themselves to the fence, footage taken by News2Share’s Ford Fischer shows.

The woman was heard saying that there was supposed to be a large group of people who were going to participate in the actions, but added, "that’s alright, it’s not for everyone."

The two jumped over the metal barricades that were placed away from the non-scalable fencing, and were seen running to their positions along the fencing.

"Overturn Roe, hell no," the man was heard chanting as he sat down, hand chained to the fencing.

"Today, the lives of millions of people are in the hands" of the judges, which the woman who chained herself to the fence said were "pacifists."

"In a world without Roe, this is what it looks like," she said, motioning towards her handcuffed wrist. "This is our reality, for millions of women across the world. In a post-Roe world, people will die. I could die."

"These handcuffs will be placed by the laws which bound our bodies to this government’s will. We will be reduced to nothing more than producers of the workforce. Without the fundamental right to choose, we cannot become doctors, scientists, or become better mothers," she continued, wearing white pants with red paint signifying blood on them, as well as writing on her stomach that states "not government property."

A man with a megaphone yelled to the woman that the Texas Heartbeat Act has been in place for months, and that "women aren’t dying."

As the two stood chained to the fence, the crowd chanted popular pro-abortion phrases like, "not the church, not the state, women must decide our fate," and "pro-life is a lie, you don’t care if women die."

At one point, another woman was seen conversing with the two activists, and when police escorted her away, a woman was heard yelling that the woman behind the fence is a "legal observer."

The two were handcuffed to the fence for around 10 minutes before they were escorted away by officers, with their hands now handcuffed behind their backs.

The so-called "legal observer" was also seen being taken away in handcuffs, with the woman in the crowd yelling "free our legal observer."

Protests at the Supreme Court have been ramping up in anticipation of a decision in the case of Dobbs v. Jackson Women's Health, where last month a draft decision was leaked indicating that their ruling could overturn Roe v. Wade.