"The people, the monsters in power, that control the puppet, not just her, but the message it sends to every girl and every boy out there, that you are disposable, and the elite can own you," McGowan said. 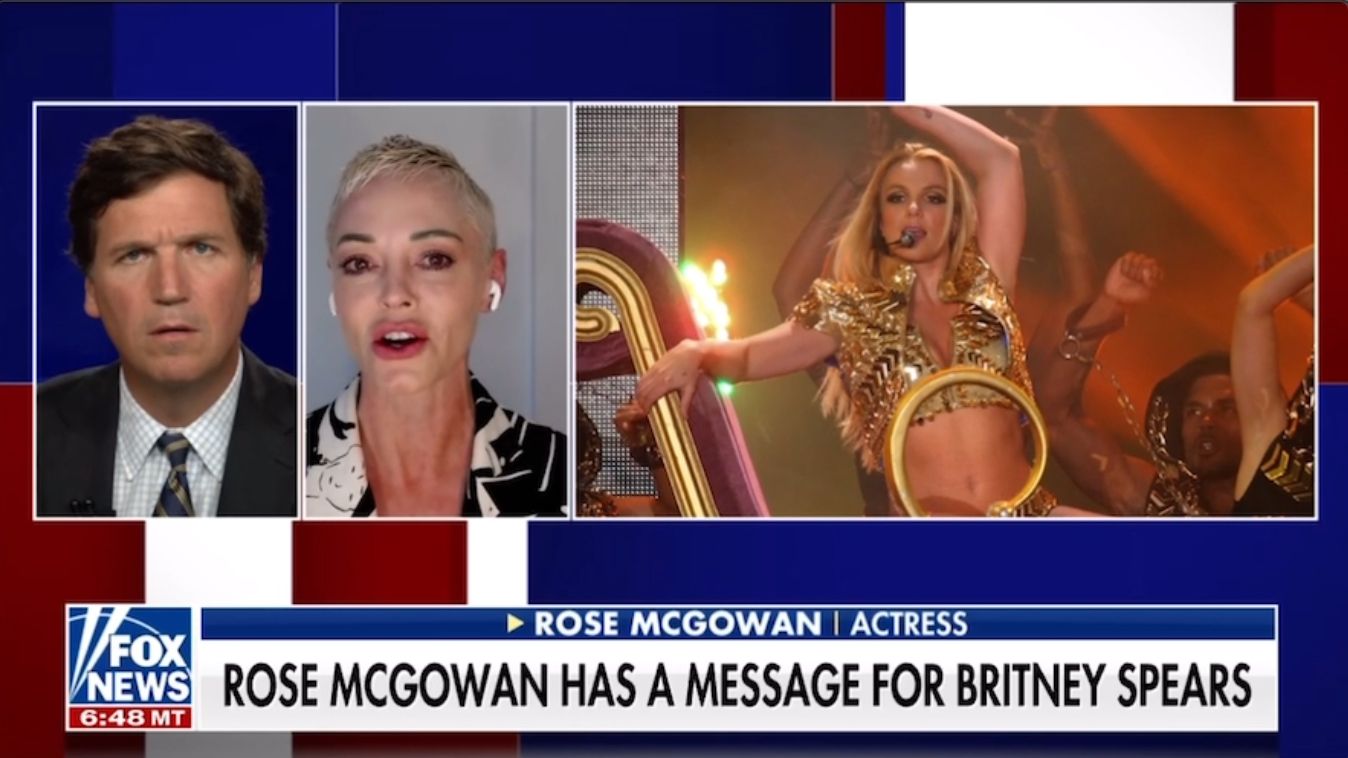 Rose McGowan reached out to Tucker Carlson shortly before airtime on Wednesday to let him know she had something to say. Carlson let her on, saying "we're completely open minded," without knowing what she was going to say, and McGowan spoke about the conservatorship that pop recording artist Britney Spears has been living under for the past 13 years.

"I'm coming at this cold, again I haven't seen Britney Spears since 2003, I just read that she's been under a conservatorship, make the case for me if you would," Carlson said.

"Well, in my opinion, and in many others, it's bad," McGowan said. "Imagine you're a 25 year old young woman, or young human, who has been forced to perform since as long as she could walk, to support her family."

"Her father put her under a conservatorship at age 25. Many in the media laughed and scorned her when she shaved her head. I lived in Hollywood during that time, and I've made it my life's mission to tell all of you out there what so many of you really know deep down: That fame and Hollywood and the media machine are rotten to the core and they do hurt and they do damage," McGowan said.

"At age 25," McGowan explained, "her father and a judge ruled, with many a paid-off doctors' help, that Britney Spears had dementia. So, since then she's gone on to do a five-year residency in Vegas, three shows day. She's gone on a tour in 2018."

Speaking in a statement, Spears said on Wednesday "I've lied and told the whole world I'm okay and I'm happy." But she said "I'm traumatized. I'm not happy, I can't sleep. I cry every day... I'm so angry it's insane." Spears asked for the conservatorship, controlled by her father, to be terminated, reported Teen Vogue.

"I want to be heard," Spears told the court. "I want changes and I want changes going forward. I deserve changes... I just want my life back, it's been 13 years and it's enough." Terms of the conservatorship have prevented her from making her own doctors appointments, meaning she hasn't even been able to get permission to see a doctor to remove her IUD. These provisions mean she can't control her own reproductive life, or her personal relationships.

Spears said "I'm scared of people. I don't trust people with what I've been through." Explaining that she's not interested in having a psychological evaluation before she's granted control of her own life back, she said "It's not okay to force me to do anything I [don't] want to do... I truly believe this conservatorship is abusive. I don't feel like I can live a full life."

"It's doing me way more harm that good," Spears told the court. "I've worked my whole life, I deserve to  have a two to three year break and do what I want to do. But I do feel like there's a crunch here, and I feel open and I'm okay to talk to you about it, but I wish I could stay on the phone with you forever—because when I get off the phone with you, all of a sudden I hear all these nos. And I feel ganged up on and I feel bullied and I feel left out and alone. I'm tired of feeling alone."

The state of Spears' conservatorship and the awareness that she has been legally prevented from being able to live as an independent adult capable of making her own choices spurred the #FreeBritney movement. Fans want to see her stand on her own, without these legal barriers.

McGowan detailed all this to Carlson, noting that Spears appearance in court on Wednesday was "literally a cultural landmark moment. It is a cultural reset. She got to speak for the first time I believe in her life, honestly and openly. And what has been done to her is horrific," McGowan said.

"And I know it's like 'why should we care about a rich, pop, princess,' right? But I think it's deeper than that. And I think it goes to alot of what you talk about, which is the rot in the machine and how society also plays a part in a weird form of oppression," McGowan said.

Tucker understood implicitly what McGowan was saying, and clarified that the conservatorship means, in essence, that Spears is unable to make any life decisions for herself. This includes when she sees her children, medication that she takes, and virtually all considerations that an adult makes for themselves.

McGowan said that Spears is angry, and "I think she's ready to blow the lid." McGowan spoke about understanding the kind of rage that Spears must be feeling, having been one of the first people who had spoken out against Harvey Weinstein and his Hollywood abuse practices.

"The people, the monsters in power, that control the puppet, not just her, but the message it sends to every girl and every boy out there, that you are disposable, and the elite can own you," McGowan said.

The conservatorship was entered into in 2008. It was meant to expire in August 2020, but a judge in California extended the terms of the agreement to February 2021. Spears' trust, which she is unable to legally control, is worth millions. Spears has been trying to break free of her family's control via this conservatorship since 2014.