Toronto Police have arrested a man going by the same name as someone on Facebook who posted a lengthy statement claiming he vandalized the monument. 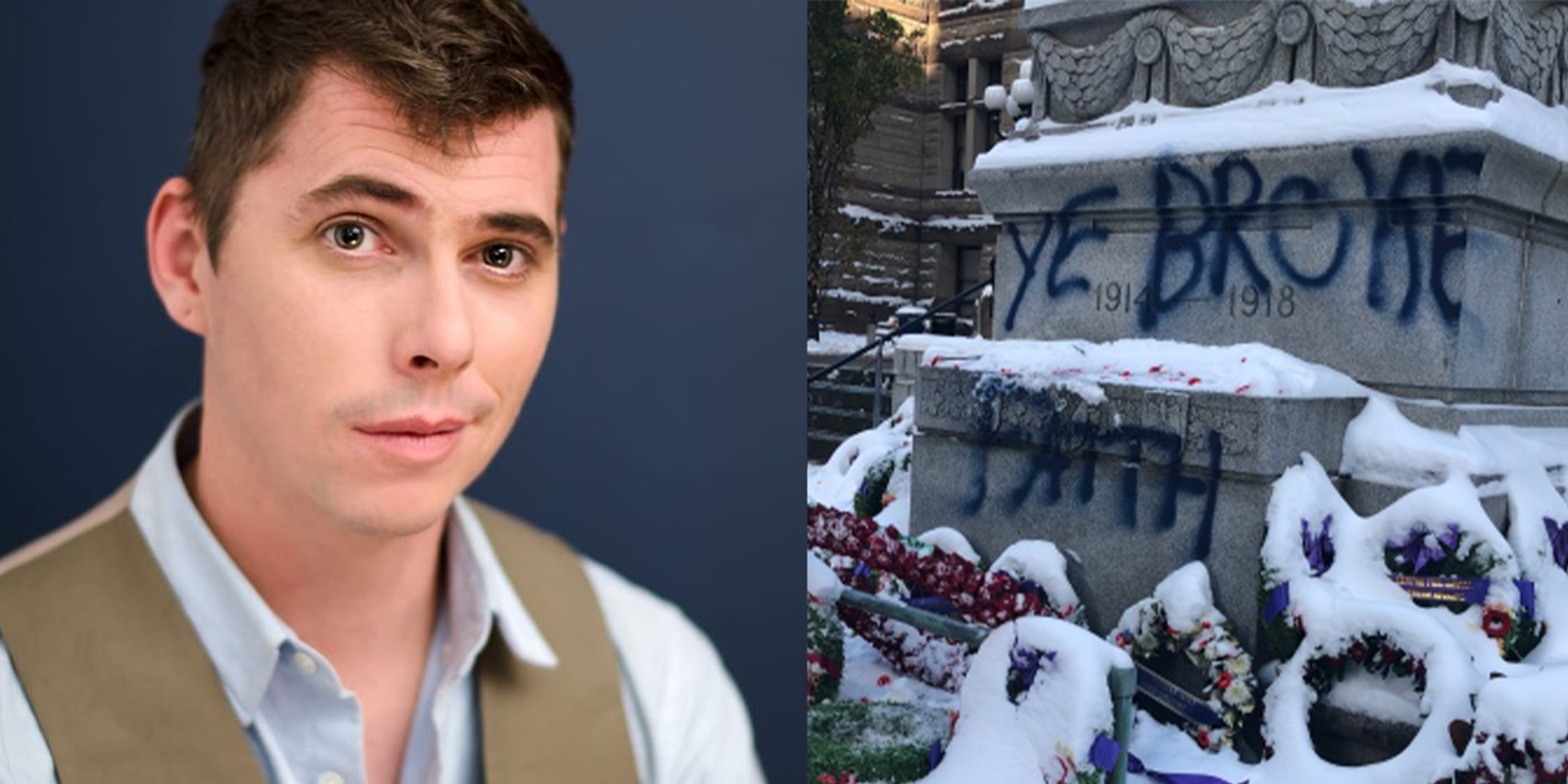 Thomas Christian Zaugg, 33, has been arrested in relation to the vandalism of a historic cenotaph honouring Canada’s fallen soldiers on Bay Street in Toronto, according to the Toronto Police Service.

The cenotaph had been defaced with blue spray-painted words reading “Ye Broke Faith.”

A Toronto-area man going by the same name on Facebook posted a Nov. 13 statement to Mayor John Tory, claiming responsibility for the vandalism. A subsequent video was recorded where Zaugg read the statement, and included additional commentary.

“National monuments are public commons, and places that are fair targets in the cultural war.” Zaugg says in a Nov. 13 video posted to his Facebook, continuing “Graffiti is easily removed. It does not disrespect a war memorial to momentarily affix a line from a poem…”

The line is apparently taken from John McCrae’s poem “In Flander’s Fields.”

The video, which has been viewed two thousand times, is still available on his Facebook, among posts stating “if you support the censorship of Don Cherry, you are an enemy of my country,” and lauding a Nickelback song for being “the only Canadian art produced in the last 15 years that is critical of the government.”

Other posts include criticising the media for “sitting on” his story, an apparent reference to the lack of coverage over his statement taking responsibility for vandalizing the cenotaph, as well as his other various political manifestos, posted on his social media. Christie Blatchford, Joe Warmington, and The Post Millennial were among those Zaugg attacked.

The Post Millennial did not receive anything from Zaugg, despite claiming he had sent his admission to our news outlet. However, The Post Millennial was looking into his claims before the police confirmed they had arrested him for the desecration of the monument.

Zaugg, in another video posted March 18 to his Facebook, adorns military-style camo, and discusses the formation of a paramilitary auxiliary he calls the Canadian Civilian Defense Force. The force, according to Zaugg, is being created in anticipation of mass food scarcity, which he states will occur “within three years.”

The Post Millennial reached out to both the Toronto Police Service and Thomas Zaugg for comment, but neither responded before publishing.

UPDATE: While the Tweet embedded in this piece from Asif Hossain refers to Zaugg as a “regular right-wing nutter,” a cursory exploration of his past reveals he was a prominent leader in the Occupy Toronto movementseveral years ago. During this time, Zaugg lived in a Yurt in St. James Park decorated artistically with feminist slogans and the painted faces of racialized women. Multiple outlets, including the Toronto Star, Globe and Mail, and Torontoist, profiled Zaugg and sought his comment on Occupy-related stories.