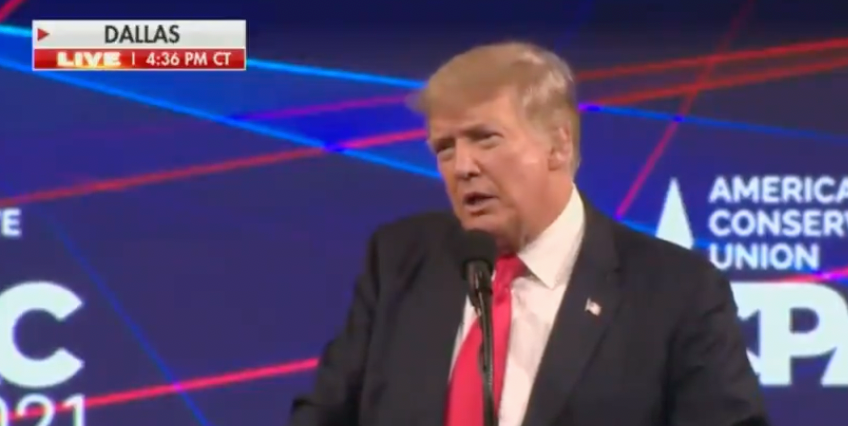 The crowd at CPAC was ready on Sunday for former President Donald Trump. Cheers and wild applause greeted the 45th American president, as it does so often when he speaks to his supporters. From the sea of red hats and American flag patterned scarfs, capes came chants of "USA."

"You can't shut down President Trump and you can't shut all of us up forever, because there are just too many of us," Matt Schlapp said as he welcomed Trump to the stage.

Trump took in the crowd as they screamed and cheered for him. Trump speaks to his base with a seemingly limitless energy, and for those who voted for him, who approved of his four years helming the American state, and who wish he was president still, his presence is enough to bring hope that the nation may be able to maintain a stable footing both domestically and on the international stage.

Trump was at CPAC to make sure that his base of supporters know that he has no intention of letting the radical left win in any area of the American cultural or political context.

"We will completely defund and bar critical race theory. 1776 not 1619, if you don't mind. And if government run schools are going to teach children to hate their country, we will demand school choice, as we already have. If you listen to the media or watch the evening news casts, our country has really gone bad. All we talk about is race," he said.

"The Democrat controlled media talks race for political reasons... but it's hurting our country... and more than anyone else, our great minority communities... the Democrat obsession with race is only dragging us back into the past and it is bringing our country down to a point where even China and Russia are lecturing us on human rights, race and they're doing it in a very humiliating fashion, he said.

"They're taking our heritage away and that's not going to happen," Trump said. Biden has brought the country "to the brink of ruin"

"They have totally obliterated your energy infrastructure," he said, "I told you." Trump's son Donald Trump Jr. spoke on Friday, saying that Trump was "right about everything."

Trump touted his own border policies and contrasted them to Biden's total border failures. "Walls work," he said.

"Now the Biden administration has turned the border into the greatest single disaster in national history," he said, nothing that "illegal border crossings up are 1000 percent."

"More illegal alien minors have arrived," he said. Human traffickers are the ones who are benefitting from the lax border policies.

"Arrivals are up nearly 500 percent, think of that, and they're being resettled" across the country in cities and towns, and the citizens there have no idea that people are arriving there. He decried "chain migration," the practice of immigrants bringing their families along as well.

"Our whole country has become a border," he said, saying that the country at large has become one big sanctuary city. His administration, he said, tackled the human trafficking and drug cartels, as well as illegal immigrations who are members of hangs like ms-13, saying that "we would send them the hell back to where they came from."

"Biden's border crisis is also helping drive an unprecedented crime wave," he said, indicating that the crime wave that has struck so many American cities is partially a result of illegal immigration.

"We're not going to take it anymore," Trump said, referring to the lax treatment of Antifa militants and BLM activists. "Vote for America First Republicans, or to put it simply, vote for MAGA," he said to wild cheers."

The Democrats attack on the Bill of Rights, specifically the first and second amendment, is foremost on Trump's mind as he has filed a class action lawsuit this week against big tech giants. "We are suing Facebook, Twitter and Google," he said. "They're going too far," he said, "like a spoiled child."

"We're taking Mark Zuckerbucks, Jack Dorsey, and the other silicon valley millionaires to court… until we have restored the sacred right to freedom of speech to every American," Trump said to applause.

He called social media's suppression and censorship during the 2020 presidential election "a major attack on our Republic." He also claimed that Zuckerberg had funded drop boxes in several states.

This was "to boost, illegally, the Democratic vote," Trump said. They worked together to suppress and diminish news coverage that was" in opposition to Biden or his campaign.

"At least 10 percent" of Joe Biden's voters would have voted against Biden if they'd known about the laptop, he said. "The truth was covered up and it had a giant impact on the election. This must never happen to another party's presidential candidate again, it can never happen."

They "undermined the integrity of the ballot box," he said, "by censoring" any talk or concerns over election integrity. Trump recounted the Time Magazine story in which leftist Democrats admitted their election manipulation tactics.

The Governor of Georgia and the Secretary of State let us down, he said, noting that the voting laws passed in Georgia were actually quite tame, yet they are the only state being sued by the Biden administration. This, Trump said, is because Governor Kemp of Georgia is weak.

Trump spoke about the questions concerning his cognitive strength, and the cognitive test he took and "aced." "How do you think Joe Biden would do on that test," he asked.

"We are truly being scorned and disrespected all over the world," he said.

The weak military of the Biden administration is bad for the country, he said, touting his own work rebuilding it during his four years in office.

Trump has the love of this crowd, and the question is what it means for the Republican party if Trump wants to run for president again for a second term. He has continued his rallies and public appearances as the pandemic restrictions have lifted in states across the country.

"Americans do not support the woke left, the people are with us, you have no idea how much," he said.

"They're very vicious and they're smart and they stick together," he said of the Democrats. "Democrats are ruthless, but they are united." He said "they have bad policy, and it's going to destroy out country.

"They believe in Marxist ideology," he said, "and the radical agenda" of their party. While he called out his concerns about the "rigged election" and Democrats, someone in the crowd yelled out "Ashli Babbitt," the woman who was killed by Capitol Police during the Capitol riot on January 6.

There are so many issues and instances that Democrats used to attack Trump, and so many of them have been proven false, from the Steele dossier and Russia collusion, to the reasons for the US House of Representatives seeking to impeach him. Impeachment, he said, only served to make him stronger. "I didn't become different, I got impeached twice," Trump said while discussing the concerns that Bill Barr had after Democrats took aim at him.

"Republicans play a much nicer game than the Democrats… but perhaps the Republicans will have to rethink their game plan," he said.

"They spied on my campaign," he said, "we caught them, and nothing happened." At the mention of Hillary Clinton's name, a portion of the crowd chanted "Lock her up," just like the old days of 2016.

As regards the 2020 election, he said the Trump campaign got more votes in 2020 than in 2016. He said the entire system was "rigged against the American people."

"The radical left has been methodically taking over every institution in American life," Trump said, from schools, to universities, to corporations and Hollywood.

"The Democrats are vicious to the supreme court and to Kavanaugh… How about Brett Kavanaugh," he said, "it was all a made up scam, they should be prosecuted," he said of the women who accused him of sexual misconduct. He slammed the hearing, and the treatment of Kavanaugh, by Democrats who were doing it to go after Trump.

It's the approach of Republicans, Trump said, that needs to be changed. The career politicians who shipped off jobs and troops overseas, and "sold out our country."

Trump slammed Democrats who have had their way with the nation, and use their power to line their own pockets, using Hunter Biden and his alleged influence peddling as an example of their corruption.

Trump said he he's saying the loss made the movement stronger, noting that "not a lot of people think joe's going to be running." Trump said he leads in polls against Kamala.

"The Democrats want me out and they want me out as fast as possible," he said, "I could have a nice beautiful life but here I am on a Sunday in Texas."

The radical left… hates our movement because we took on the radical special interests…" he said the US tackled the border, stopping the murderers and drug dealers, the human traffickers who mostly traffic in women. "We demanded fair trade for the American workers and e did a great job of it." He said under his leadership, the US pulled out of NAFTA, and the Pacific partnership, going instead for bilateral agreements.

The WHO "is a pipe organ for China," he said, as the crowd cheered for his statements about the US backing away from the World Health Organization under his watch. Biden overturned this, going back into a WHO and subsidizing their global efforts.

What Trump wanted with the World Health Organization was to fund it for less than the US was previously paying, perhaps paying the same amount China pays. For Trump, it makes no sense that the US should pay such a huge amount, while China runs the massive NGO.

Trump has the focus of the party despite his 2020 loss. The crowd at his rallies, and at CPAC, is still enthralled with Trump.

"During my administration our country was respected again," he said. "We always respect our great American plan."

Of our "American inheritance," he said "We are not going to let it be taken away from us by a small group of radical marxist maniacs." Trump said "our movement has just begun."

"We will lead" the party back to victory, he said, predicting that the GOP will take back the legislature and the White House. "Working together we will make America powerful again," he said, concluding with the words that the crowd recited along with him, "We will make America great again."

If this summer CPAC is any indication, that's exactly what the Republican party and conservatives are looking for... again.