In a pretrial risk assessment administered on November 5, Brooks scored a four out of six in Failure to Appear (FTA), and a six out of six in New Criminal Activity (NCA). 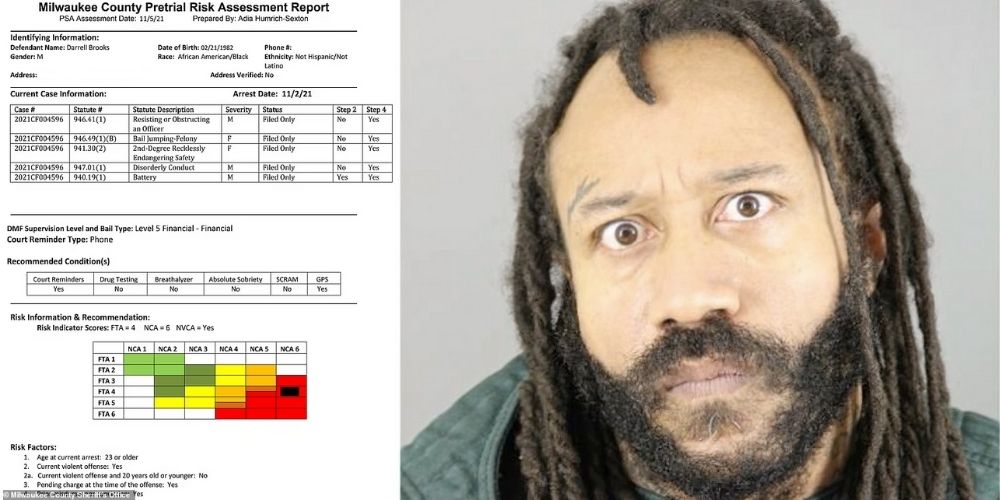 On Thursday, the pretrial risk assessment for Darrell Brooks, the man who reportedly plowed his car through Waukesha's Christmas parade last month, killing 6, was revealed on social media, showing that the man scored extremely high on it. This indicates that the court was aware that he was at risk of committing future crimes.

In a pretrial risk assessment administered on November 5, Brooks scored a four out of six in Failure to Appear (FTA), and a six out of six in New Criminal Activity (NCA).

The assessment was administered following Brooks' November 2 arrest date, in which he was arrested for allegedly attacking his ex-girlfriend. Brooks was charged with resisting or obstructing an officer, felony bail jumping, 2nd degree recklessly endangering safety, disorderly conduct, and battery in connection to that incident.

The assessment indicated that a check with the National Crime Information Center impacted his assessment score. Other risk factors included age, pending charges, prior convictions, and prior sentences.

Noted at the bottom of the report, the person who administered the assessment said that "Mr. Brooks is diagnosed with a serious and persistent illness in which he is not receiving treatment for."

Despite numerous factors indicating Brooks was a risk to the public, his bail for that arrest was set at just $1,000, and he was released just days before the deadly Waukesha massacre on November 21.

Milwaukee District Attorney John Chisholm called Brooks' bail "inappropriately low," despite it being his office who set the bail.

"The state's bail recommendation in this case was inappropriately low in light of the nature of the recent charges and the pending charges against Mr. Brooks," said Chisholm.

Despite this statement, in 2007, Chisholm was reported saying that he knew his progressive approach to law enforcement and prosecution could hurt people in the future.

"Is there going to be an individual I divert, or put into a treatment program, who's going to go out and kill somebody? You bet. Guaranteed. It's guaranteed to happen," he said. "It does not invalidate the overall approach."