"So therefore, if President Putin's buildup of military troops is leading to volatility and an increase in oil and prices, hence you have Putin pump, gas price pump, rise," Psaki tried to say. 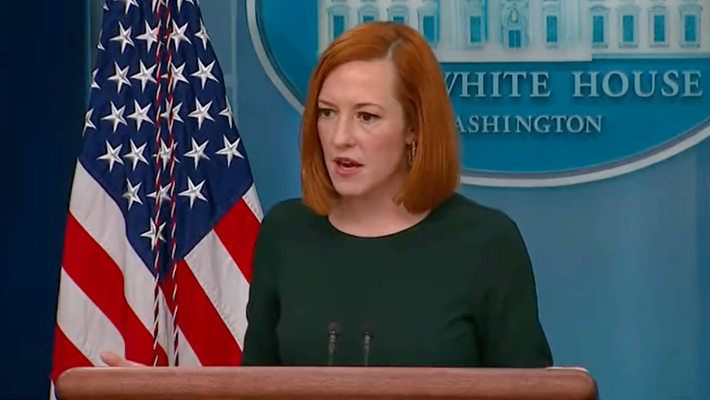 "And maybe you want to use that on Fox?" Psaki jokes. "I welcome that."

Doocy said that he thought it "would get alot of airtime because we have heard the President warn for month that gas prices were rising because of the supply chain, and because of post pandemic demand. If you guys knew for months that this was going to be the hashtag Putin Price Hike, why are we just hearing that now?" Doocy asked.

"Well, Peter, if we go back to six months ago," Psaki said, "I don't think anybody was predicting we would be exactly where we are as it relates to Russia and Ukraine. As you know that events in the world, including the invasion by Russia of a foreign country, does prompt instability and volatility in the global oil markets.

"And there are all sorts of different issues that can impact that. That's what we're seeing now. Outside economists and analysts have conveyed and said publicly, that Russia has invaded, this buildup of troops. President Putin's decision to do that very early this year, led to a lot of the instability and volatility in the oil markets. You don't have to take my word for it. So therefore, if President Putin's buildup of military troops is leading to volatility and an increase in oil and prices, hence you have Putin pump, gas price pump, rise," Psaki tried to say.

"You and the President," Doocy followed up, "are both talking about producing energy here, saying that oil and gas companies have 9,000 permits to drill now, they could be drilling right now. Would President Biden cut red tape to make that possible?

"What red tape needs to be cut when they have the permits? They have the capacity to do it, what's holding them up?" Psaki asked.

Doocy questioned whether or not the leases were on land that actually had reserves of oil and gas. "Does President Biden think that each of these 9,000 leases that are available, have oil or gas in them? Because industry experts are saying that that accusation is is a complete red herring. Some permits are viable and some are not. And that when you say that this represents a fundamental misunderstanding as to how this process works."

"Well, first of all, the nearly 60 percent of leased acres remain non-producing, that's a lot. in the range of 20 million acres. So there are 9,000 unused approved permits to drill in. That should not require that should not require us inviting them to do that. They should do that themselves," Psaki said.

"But what what is happening," she continued, "—the permits have been granted Peter— What is what is happening here is that we are seeing—these are private sector companies. We recognize that, many of them are making record profits. We have publicly available data, they have pressure to return cash to investors and their shareholders. What we're saying right now, is we're asking them to to go use the the approved permits, use the unused space and go get more supply out of the ground in our own country."

Doocy asked if the Keystone XL Pipeline could be restarted. Psaki said that wouldn't help anything. "The pipeline is just a delivery mechanism. It is not an oil field. So it does not provide more supply into the system." She went on to say "there's no plans for that and it would not address any of the problems we're having currently."