"Let's not forget what happened on January 6, 2021. We saw an insurrection, a mob, that was incited by the person who occupied this campus, this facility..." Jean-Pierre said. 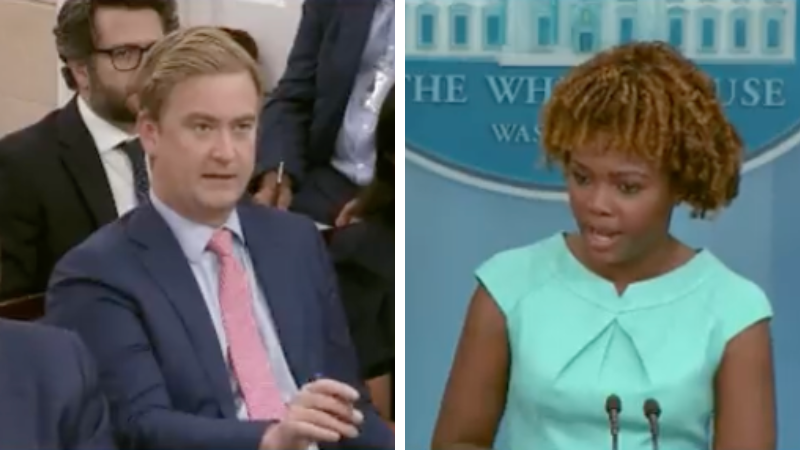 Fox News' Peter Doocy asked the White House on Tuesday about Biden's anti-MAGA speech last Thursday. Doocy was looking to know how Press Secretary Karine Jean-Pierre could reconcile Biden's claims that it is "extremist" to question election results with her own questioning of election results in 2016. Jean-Pierre said that was "ridiculous," and then invoked January 6.

"A follow-up about the MAGA Republican attention," Doocy asked. "So we're all in agreement that it is incorrect to say the 2020 election was stolen. What about the 2016 election?"

"But just trying to understand the new attention on the MAGA Republicans," Doocy replied, seeking an actual answer to his question. "You tweeted in 2016 'Trump stole an election—"

Jean-Pierre interrupted Doocy to say she "knew he was going to bring up" her claims of election fraud in 2016. "I was waiting, Peter, when you were going to ask me that question."

"So let's be really clear," Jean-Pierre said, "that that comparison that you made is just ridiculous. I have been— I have been—"

Doocy began to interrupt "why is it ridiculous?"

"What we are talking about right now is— let's not forget what happened on January 6, 2021. We saw an insurrection, a mob, that was incited by the person who occupied this campus, this facility, at the time, and it was an attack on our democracy. Let's not forget people died that day. Law enforcement were attacked that day. That was the danger that we were seeing at the time. That's what the President has called out. And that's what he's going to continue to call out.

"So yes, when you have MAGA Republicans, an extreme part of Republicans, who just deny or do not want to really say what exactly happened on that day, or say it was a protest when it clearly was not a peaceful protest? That's not what we saw on that day.

A majority of Americans believe that the President's Thursday speech in front of Independence Hall in Philadelphia was divisive and designed to instigate his political opponents. The White House said that the speech, which focused on Biden's political opposition, was not political.

She then took a question about the Obama's upcoming visit to the White House for a portrait unveiling.