Calgary has an ugly art problem

Disclosure : Wyatt Claypool is a third-year Policy Studies and History student at Mount Royal University, where he serves as… 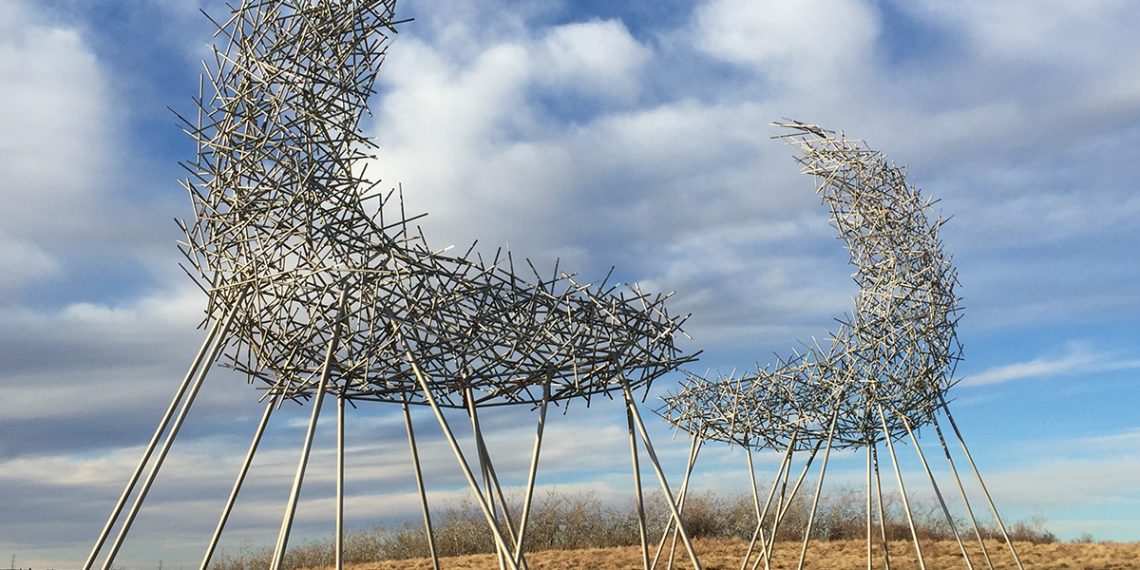 Disclosure : Wyatt Claypool is a third-year Policy Studies and History student at Mount Royal University, where he serves as the President for its Campus Conservatives. He is also a Conservative board member for Signal Hill.

I like art just as much as the next fellow, but I can’t seem to enjoy much of Calgary’s art installations, especially those built over the past several years.

Nobody I have talked to will ponder this modern art as anything more than the hot garbage we’ve (begrudgingly) grown to “tolerate.” Engaging with these installations is as enticing as a root canal, minus the dental benefits.

They are unappealing to everyone lacking the ridiculous sense of elitism that plagues those involved in the world of modern conceptual art. If Calgarians do not like the art that reflects poorly on the quality of the pieces. Not on Calgarians.

They say beauty is in the eye of the beholder, but if so few see the beauty, then why spend millions on wacky art projects?

Constructing abstract pieces like it’s going out of style (which I hope it is), has done little to convince Calgarians of their merit, yet spending has never slowed.

Maybe I lack an affinity for the finer things in life. Perhaps it is people like me who are the problem. How dare I question otherwise questionable spending habits?

Half of the city council would prefer an electorate incapable of scrutiny. But thankfully, their delusions of grandeur are stopped in its tracks by everyday citizens concerned with our ability to budget.

Likewise, the littering of our beautiful city is not just to appeal to the niche artistic tastes among the Calgary Arts Development (CAD) board. It is also another attempt to justify bigger budgets each year regardless of the city’s ability to pay, just even more ridiculous than usual.

And you know what they say about bigger budgets? The more one spends, the higher the chance for fiscal mismanagement.

But then again, maybe I’m just another member of the silly masses unable to open my mind to the “woke” subjectivist style. Why is that? Have I become an unforgiving cynic by age 20? A bitter “old man” tired of the garbage we pour millions into?

Yes, I am bitter, but I’m not the cynic here. I do not believe that Calgarians like myself are tasteless, and I certainly do not take for granted taxpayer dollars.

Public art is not a problem. It’s the city’s botched execution.

You may be surprised that Calgary’s junk art installations have names, or at least were not the result of a horrible construction accident.

That blue ring is called Traveling Light, the beams and slate is the accurate but incorrect name for the Bowfort Towers, and the white fire kindling at Rocky Ridge is called Convergence. There are many more but naming them is more effort than it’s worth.

If my problem with these art installations was just that they are tasteless (which is a fact), then I would not feel the need to write on it. The issue here is that this clutter comes with a hefty price tag.

Collectively Traveling Light, Bowfort Towers, and Convergence cost Calgary taxpayers an estimated $1,881,000, and those are just three that caught my attention. It is rare for any of these projects to be less than 100K, even One Puck Hollow (a slight hole with a metal fence around it) cost-productive Calgarians an estimated $150,000. You may have a laugh looking at the completed projects on the city’s website like I did, but make no mistake — we are being ripped off by CAD.

Ironically, after Traveling Light was finished in October of 2013 Mayor Nenshi said the installation was “awful” and a review was commissioned to look into public arts policy.

More money down the drain.

This would have been commendable, but year after year more expensive and equally embarrassing art installations have continued to be unveiled.

Convergence was put up in 2018 ($911,000), and well as those two incomplete drinking birds outside the Calgary Central Library ($2 million) just to name a couple of recent pieces.

I do not believe Mayor Nenshi or city council meant to blunder the oversight of CAD so severely, but they allowed themselves to believe it was an unimportant issue. The money may not be huge, but the fact Calgarians are being made to pay to downgrade the look of their city is important as it proves how city council has gotten used to casual waste of the taxpayer’s money. Although it should be noted that the board of CAD is still the origin of the art installations, not the city council.

Calgary is not precisely unique on its addiction to overpriced public art installations. This is prevalent across the globe. Los Angeles bought a bolder for 10 million dollars to sit above a walkway underpass in front of the LA County Museum of Art. In 2008 Denver had finally unveiled Blue Mustang, often referred to as the “devil horse,” for $650,000 and only twelve years later than expected.

The sickly looking Kirby Tree in the town of Kirby England cost £60,000 ($100,000) which was partly paid for by multinational grocery store chain Tesco which only added to the insult when Tesco scrapped plans to open a supermarket in the town which would have created 800 new jobs. I could list off dozens more of these examples, but you get the picture, plus most of this stuff tends to amount to differently arranged woodpiles.

I believe the reason for the continued assault on the visual senses by publicly funded art installations is two-fold. First, the departments in government that controls grants and supplies contracts to artists for these pieces are incentivized to burn through their budget (much like many other departments) so they can justify yearly increases, or at the very least ward off budget cuts.

Modern conceptual art works well alongside this goal as it can be designed and constructed in relatively short order and the simplistic nature of the pieces means almost any artist can be hired to put together an installation. This way, an art department like CAD can show that they commissioned and build a handful of art installations in a year as if quantity ever outdid quality when it comes to art. CAD keeps getting budget increases, so this haphazard approach to arts development has been working in their favour.

The second reason I see playing a role is an odd liking of this sort of conceptual nonsense in institutions like CAD. Very infrequently do any of these art installations get unveiled and are not met with significant public disapproval, nor is there ever much open public consultation (that would slow them down). Like many insiders in the art world, CAD has, from what I’ve seen, an odd vice for obscurantism, the liking of vagueness or difficulty to understand, which is a particular toxic characteristic inherent in modern conceptual art.

The fact so many dull and meaningless installations are built despite general public disdain for the style proves gross ignorance to feedback or, what I think is more likely, a disdain for Calgarians as not being as cultured and sophisticated as the board members of CAD. An emperor’s new clothes situation if I have ever seen one.

The CAD board is willing to overpay by several factors to instill a greater sense of importance in the art they like. If a blue ring is $477,000, then there must be something the public is missing when they criticize the piece. If we had only paid a few thousand for Traveling Light then in the eyes of CAD, it would lose its artistic merit and probably the name.

It all begs the question, not taking quality into account, why should Calgary’s arts development team be headed by people who do not reflect Calgarians taste in art? The short answer is we shouldn’t. A city’s institutions should reflect the priorities of the residence.

Careless art spending is a symptom of poor budgeting

In November of 2018 not only was the 2019 arts budget doubled, but an extra $5 million was also added on top. Despite this only amounting to a percent of infrastructure spending, this wasted art installation spending represents funding that could have been used for services Calgarians need or at least money that could have been saved by taxpayers.

In part, a $9-million hit to essential services is used to offset the apathy within the city council. Cutting costs is the unfortunate reality of living in a world where scarcity exists. However, that doesn’t mean our councillors can’t be more prudent with our tax dollars.

With the city council spending $200-million more on average with every succeeding year, we fall deeper and deeper into the rabbit hole of punishing the masses for the incompetence of the elected few.

The economic hurt felt by many Calgarians does not lie solely at council’s feet, although their refusal to adjust accordingly is purely owned by them at this stage.

Specifically, the 15 percent hike in property taxes from 2017 to 2018 hurt many. Yet, there’s no tenable long-term solution in sight.

With a downtown vacancy rate of 25%, the burden of property taxes has shifted to small business and residential units. The “downtown tax-shift” was the result of a $250-million shortfall caused by the most recent recession.

Appallingly enough, the $60-million tax relief to businesses is being hampered by Mayor Nenshi who claims it is going “too hard” into the city’s annual budget. Well, that’s funny. Perhaps, it is the taxpayers who find city council hitting their family budgets ‘too hard.’

After succeeding years of a 2.5 percent increase in annual salary, the mayor and city council graciously reduced their wages by a whopping 0.08 percent for 2018. For Mayor Nenshi, that’s a salary reduction of $160.60 per annum and $90.73 for the rest of the city council.

The need for our city council to find savings is paramount, and I can find no reason why CAD should not be at the top of the list.

It should be plainly obvious that if Calgarians are in need of tax relief then concurrently our need for public art projects should fall, pretending we ever approved of CAD’s spending practices, even when times were good.

But again, we got what we voted for, and the cost was extensive. When sensible economics takes a back seat to “feel good” politics, what we end up with doesn’t feel all that good on our wallets.