California's power grid operator warned Monday that excessive heat this week will "stress the energy grid" and called on Californians for "voluntary conservation" of energy. 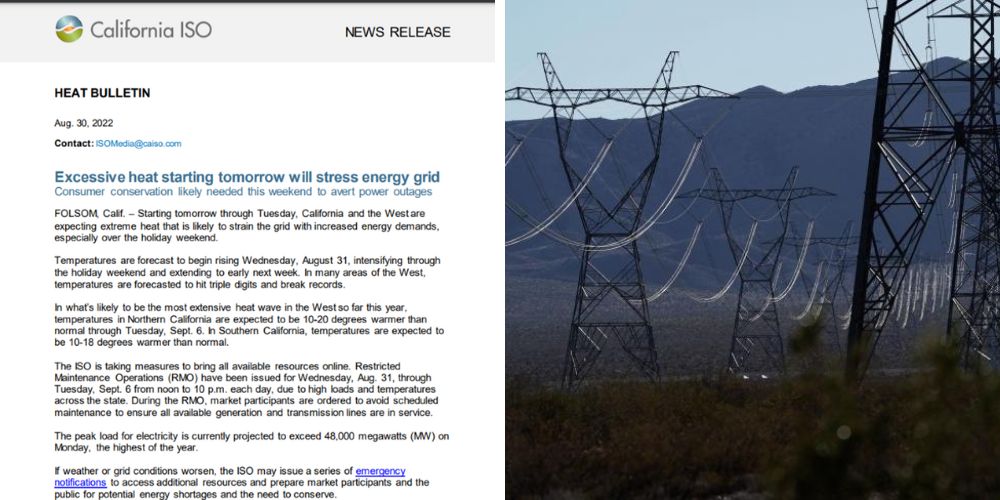 Days after California announced that they would be banning the sale of gas-powered cars by 2035, the state's Independent System Operator is now calling for residents to participate in "voluntary conservation" and to "set thermostats to 78 degrees or higher, avoid using large appliances and charging electric vehicles, and turn off unnecessary lights" over the upcoming Labor Day weekend that is forecasted to be especially hot.

The operator also said Californians should be alert for "a series of emergency notifications."

Southern California and other parts of the state are expecting blistering heat beginning on Wednesday and intensifying through the extended holiday weekend. The California Independent System Operator which manages the electric grid for approximately 80 percent of the state warned that the system is expected to be strained as businesses and residents crank up their air conditioning units.

According to a heat bulletin released late Tuesday, the peak load for electricity is projected to exceed 48,000 megawatts (on Labor Day), the highest of the year and about 14 percent higher than Tuesday’s peak.

The National Weather Service is forecasting temperatures climbing into the 80s Wednesday along the San Diego County coastline and continue to rise as the week continues with some areas reaching 105-107 degrees.

Sacramento could reach 104 over the weekend and the wind in the state is predicted to be light. The heat during the extended drought the state is experiencing also elevates the risk of wildfires.

According to the ISO bulletin, "If weather or grid conditions worsen," the grid manager "may issue a series of emergency notifications to access additional resources and prepare market participants and the public for potential energy shortages and the need to conserve."

That could result in issuing a Flex Alert, a statewide request for residents to voluntarily reduce energy consumption from 4 pm to 9 pm, the hours when California’s grid is under the most pressure because production from solar decreases and eventually disappears but the weather is still hot and energy demand remains high.

The mayor of Los Angeles Eric Garcetti tweeted on September 6, 2020, "It's almost 3 pm. Time to turn off major appliances, set the thermostat to 78 degrees, or use a fan instead. Turn off excess lights and unplug any appliances you're not using. We need every Californian to help conserve energy."

On April 24, 2021, the California Energy Commission crowed that it was able to generate 95 percent of its total power from renewable sources.

However, the grid was not statewide and didn't supply power to Los Angeles, the state’s largest city. According to the Los Angeles Times, the power wasn't entirely renewable and relied on natural gas.

There is also an ongoing battle over a plan to close the San Luis Obispo Diablo Canyon nuclear plant which supplies energy to millions of Californians.

Last week, Democrat Governor Gavin Newsom, announced a ban on the sale of gas-powered cars in the state by 2035. The electric vehicles which would in theory replace internal combustion engines would put an increased burden on the already strained power grid.