Photographs and video footage have been circulating on social media this week which appear to show a Canadian high school teacher wearing obscenely large prosthetic breasts while teaching a shop class. 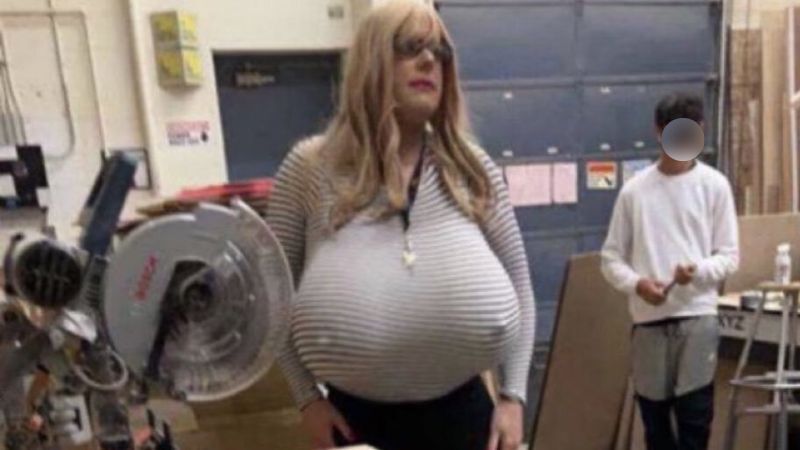 In a video which would likely make any health and safety expert wince, the teacher can be seen demonstrating to the class of high school students how to use a circular saw with the long wig dangling down near the blade.

The outlandish individual has been identified by Reduxx as Kayla Lemieux, who is a Manufacturing and Technology instructor at Oakville Trafalgar High School in Oakville, Ontario.

"The kids here most definitely don’t think [it’s] normal…but realistically we can’t say anything," said a person on Twitter who claims to be a student at Oakville Trafalgar. "Last year, the teacher was a man. I don’t think the school can fire him."

Lemieux is listed as a tech teacher in the OTHS faculty on their website.

Oakville Trafalgar High School is part of the Halton District School Board (HDSB). The board has a policy on gender identity and gender expression in place.

"The HDSB is committed to establishing and maintaining a safe, caring, inclusive, equitable and welcoming learning and working environment for all members of the school community including students, staff, parents/guardians and community members who identify as, or are perceived as Two-Spirit, Queer, trans, Non-Binary, Intersex, and those who are questioning their sexual orientation and/or gender identity(ies)," reads the policy

The board also has a dress code for students.

It would appear that the same rule does not apply to teaching staff.

The Post Millennial has contacted both the school and the board. The school declined to comment. The board has yet to reply.
ADVERTISEMENT
ADVERTISEMENT
Canadian teacher prosthetic breasts