"I love my family, I love my country and I care for my neighbour. I am not a criminal or a threat to society. What @justinpjtrudeau is trying to do is unjust. I support the @ccfr_ccdaf to keep my hunting tools. Thank you for listening to my opinion."

Carey Price, the goalie for the National Hockey League team Montreal Canadiens, posted a picture of himself on Saturday, holding a shotgun in protest of a recent amendment by the Liberals to Trudeau's pending gun control bill which would result in the largest gun prohibition in Canadian legislative history.

Price wrote on Instagram, "I love my family, I love my country and I care for my neighbour. I am not a criminal or a threat to society. What @justinpjtrudeau is trying to do is unjust. I support the @ccfr_ccdaf to keep my hunting tools. Thank you for listening to my opinion."

Pierre Poilievre, the leader of Trudeau's opposition, the Conservative Party, re-posted the message via an Instagram story and added, "Hunting is a great Canadian tradition. Trudeau's attempts to ban hunting rifles are an attack on rural and Indigenous people." 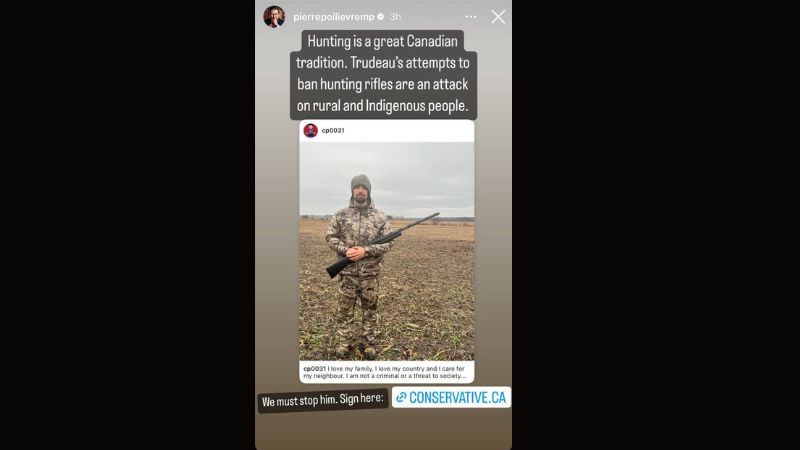 The amendment to Bill C-21 was initially pitched as a way to prevent the sale of Canadian handguns but its scope would criminalize "a firearm that is a rifle or shotgun, that is capable of discharging centre-fire ammunition in a semi-automatic manner and that is designed to accept a detachable cartridge magazine with a capacity greater than five cartridges of the type for which the firearm was originally designed."

According to the Toronto Sun, "The Trudeau Liberals aren't even hiding it anymore, they are coming for hunting rifles and shotguns."

Trudeau announced an immediate ban on so-called "military-style assault weapons" in May of 2020 and said at the time, "you don't need an AR-15 to take down a deer."

In October, the Trudeau Liberals officially announced the implementation of their national handgun freeze. Canadians were no longer able to buy, sell, or transfer handguns, nor could they bring newly acquired handguns from elsewhere into the country.

"The national handgun freeze is part of the government's comprehensive plan to tackle gun violence," the Liberals wrote in a news release. "We have already banned over 1,500 types of assault-style firearms and have strengthened our gun control laws to expand background checks. Bill C-21 proposes further measures to keep guns out of the wrong hands like revoking the firearms licences of those involved in acts of domestic violence or criminal harassment, continuing to fight gun smuggling and trafficking, and providing law enforcement more tools to investigate firearms crimes."

BREAKING: Justin Trudeau SWARMED in Hamilton by protesters calling him a tyrant, demanding his resignation