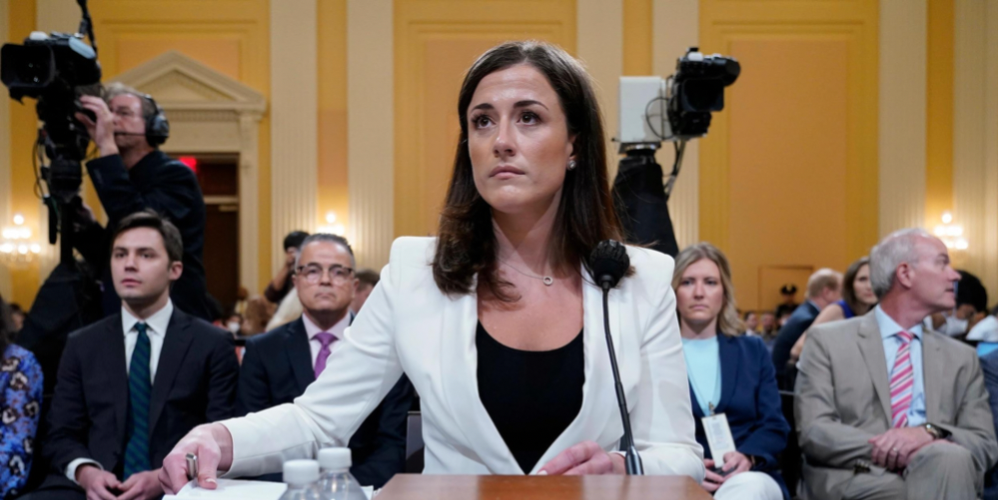 The outlet reports that on Feb. 1, Hutchinson sent a series of text messages to a conservative activist connected to the First Amendment Fund, which is a group that helps cover costs for Jan. 6 lawyers.

According to the text exchange, Hutchinson said, "Hey (redacted)! This is Cassidy Hutchinson. Kind of a random question, but do you still work for the Schlapp's at the ACU?"

Hutchinson then asked, "Do you happen to know a First Amendment fund POC I could reach out to? I was subpoenaed in early Nov., but the committee waited to serve me until last week (after Ben's deposition)."

"I had to accept service because the U.S. Marshalls came to my apartment last Wednesday, but I haven't made contact with the Committee. I'm just on a tight timeline and just trying to figure out what my options are to deal with this bs," she added.

"Ms. Hutchinson approached @CPAC for help through our First Amendment Fund which has helped J6 political victims defend themselves. I am pleased we did not assist her performance today. Relaying WH hallway gossip as fact does not qualify as first person testimony," Schlapp said on Twitter.

In another text exchange between Hutchinson and the conservative activist, Hutchinson said she does not want things to get "unnecessarily elevated," referring to the Jan. 6 committee, according to the Daily Caller.

Cassidy Hutchinson made national headlines this week when she was named a "key witness" in the Jan. 6 committee's public hearings.

Hutchinson, a former aide to Chief of Staff Mark Meadows, testified that former President Donald Trump lunged for the steering wheel of "The Beast" after staff members said that he couldn't join the protest at the US Capitol following his speech on Jan. 6. However, Trump was not riding in the Beast, he was in the White House Limousine.

Hutchinson relayed a second-hand story about the limo ride and recanted that she was told Trump became "irate," and said "something to the effect of 'I'm the effing president, take me up to the Capitol now.'"

During the hearing on Tuesday, Rep. Liz Cheney held up a handwritten note, and asked Hutchinson if it was hers. The note suggested language for Mr. Trump to use to call off the mob storming the Capitol.

However, Eric Herschmann, a former Trump White House attorney, claims he wrote the handwritten note Cassidy Hutchinson took responsibility for in her testimony to the Jan. 6 Committee.

Herschmann's statement followed the news earlier Tuesday night that two Secret Service agents are reportedly willing to testify that then-President Trump did not lunge at a steering wheel or assault them in an attempt to go to the Capitol during the riot on January 6, 2021 as Hutchinson claimed in her testimony.