YouTube CEO Susan Wojcicki told CNN that anything that goes against the WHO' stance on the coronavirus is a violation and will not be allowed on the site. 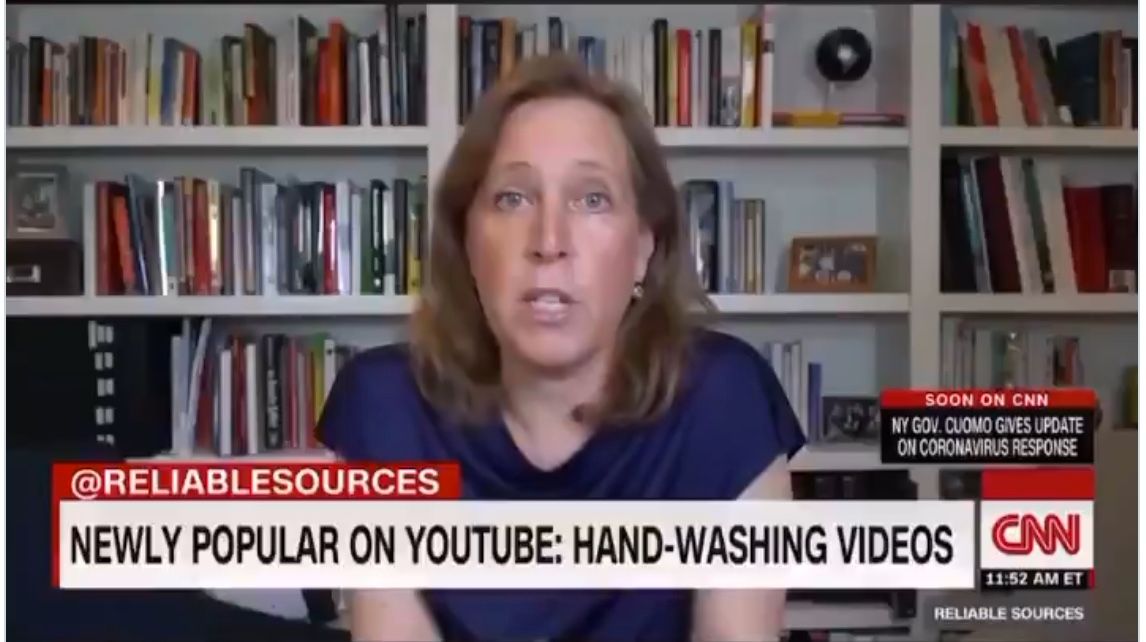 YouTube CEO Susan Wojcicki recently made it clear on CNN host Brian Stelter’s podcast Reliable Sources, that anything that goes against the World Health Organization's (WHO) stance on the coronavirus is a violation of YouTube policy and will not be allowed on the site.

While the WHO has been defunded by its biggest benefactor, and questioned about its adherence to Chinese Communist Party propaganda with regard to its narrative on the coronavirus, it has been upheld as a bastion of truth by social media companies, from Facebook to Twitter to YouTube.

The WHO did not speak out when hero doctor Li Wenliang was censored by Chinese officials. The WHO told the world not to use masks, that borders & flights from China be open indefinitely. In a move of gross audacity, the WHO informed world leaders in January that there was "no clear evidence of human-to-human transmission of the novel coronavirus.” The WHO denies Taiwan’s existence and, without any doubt, is dancing to the tune of the Chinese Communist Party.

Incompetence is one thing but supporting a corrupt institution that puts human lives in danger is something completely different. By making the official stance of YouTube that whatever the WHO says goes, YouTube is circumventing potentially more accurate information in favor of an organization that will be standing next to the CCP when the deaths from this tragedy are finally tallied.

While this should make creators sick it should not surprise them. YouTube is at heart these days embarrassed of its creators. What other CEO goes around apologizing on podcasts and talk shows how sorry she is for her problematic creators than Susan Wojcicki. Wojcicki should not make it easier for advertisers to cut out the people that make her platform possible.

This recent diverting of perspectives to favour the WHO is not the only misstep YouTube has made in demonetizing and shutting out its creators. And since the beginning of the coronavirus pandemic in the US, YouTube’s policies and practices have only gotten worse.

As the world went inside and people started working from home, YouTube announced it was going to use work at home skeleton crews and would turn much of the day to day operations over to its algorithms. Initially, Wojcicki proclaimed that any content about the coronavirus would be allowed only for a very select group of creators and the mainstream media.

While officially, since this announcement back in February, coronavirus has formally been taken off sensitive topic status, most creators will tell you actions speak louder than words. Instead of allowing creators to speak their mind, YouTube is pushing down the views of their creators and elevating both mainstream media and the verifiably corrupt WHO.

This pandemic is not the start of YouTube’s mistreatment of its creators. That both an LGBTQ org and Prager University, two organizations that disagree on just about everything, both took YouTube to court over content moderation speaks volumes. Even my grandmother can tell you about her favorite history YouTuber having videos deleted, and traffic disappearing overnight.

This poor treatment applies to not only prominent news YouTubers like Tim Pool but to topics as varied as gaming to the niche cryptocurrency community. YouTube’s relationship with creators, which started relatively friendly with the launch of YouTube in 2005, has devolved to the point where last year YouTube told creators that if their channel did not seem financially feasible, YouTube would retain the right to cancel it.

This new decision to manage the day to day operation of YouTube by AI is turning out to be a disastrous move, and it now seems that the worse aspects plaguing the YouTube community have also become a pandemic of their own.

Case in point is what happened to 23-year-old YouTuber Brittany Venti. Venti is known as a talking head streamer on YouTube that chats internet culture on her channel. Her bread and butter is to host live streams with her audience, talking about botched surgeries or movie reviews or whatever else comes to mind. Since the switch to a skeleton crew at YouTube, Venti has been the subject of a relentless assault by YouTube algorithms.

In the last week, Venti has received at least seven takedowns of her live streams and each takedown gets stranger than the previous. For round five, Venti decided just to read YouTube’s terms of service, which was flagged and taken down. On bout seven, Venti chose to pray in total silence for 5 minutes, no music, no commentary, nothing. It, too, was taken down. When Venti contacted YouTube on Twitter, she was told it was a mistake. The video was restored.

When it comes to Christianity, YouTube’s history of mistakes only seems to go one way. But regardless of religion, this exact situation Venti is facing is happening to creators both large and small across all of YouTube. And many of those takedowns occur before the live streams ever took place.

In a horrifying fact for creators, 30 perfect of all new content is automatically demonetized. And according to YouTube, this treatment will be here as long as the coronavirus is.

And since YouTube is not at the office right now, it is allowing the very worst actors on YouTube to profligate. A prime example is notoriously badly behaved YouTuber Suzy Lu. Suzy, cognizant of YouTube's current state is seemingly taking advantage of the situation and weaponizing copyright strikes, captioning complaints, and thinly veiled threats against other creators. The weaponization of copyright strikes has been a problem for years. But without the humans to monitor the algorithms, the takedowns have become a deluge.

The reaction to the coronavirus over at YouTube isn't just hurting creators; it's drastically hurting YouTube’s bottom line. Which helps explain YouTube’s decision to double down on its ever-growing push to make you watch Jimmy Kimmel videos, and push up “authoritative” sources.

YouTube has become an internet byword for a monopolistic platform that mistreats the creatives that built it. Yes, they too must deal with the coronavirus, but so does everyone. And if a parent decides to leave their kids alone at home during an emergency and leave no phone number nor the means to eat, you begin to wonder how much they care about their children after all. That’s basically what YouTube has done when they turned their already oddly biased operation over to AI adjudicators.

The faith in YouTube by hundreds of thousands of creators won't last much longer if YouTube doesn't answer their pleas for help and solve the situation they helped create. This push to enforce a coronavirus narrative that meets with the World Health Organization’s perspective, via the Chinese Communist Party, only inches YouTube closer to being a platform that is not open to creators whose views conflict with the institutional bias of the company. Now that they are hiding behind their AI, that bias is only more apparent.