Chicago mayor 'knows who to hate just by looking at them': Tucker Carlson on the racism of the left

Lori Lightfoot, who has refused to give interviews to white reporters, "is a monster," he said. "Any society that allows politicians to talk like this has a very ugly future ahead." 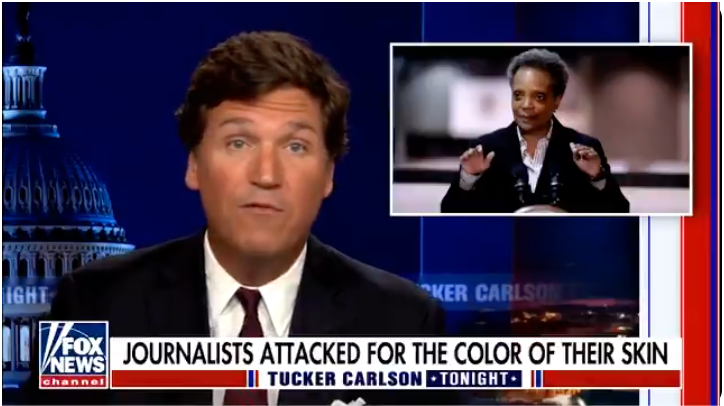 For months we've been hearing about equity, and the need to replace our conception of equality with this new term. But does anyone really know what it means? That's what the team at Tucker Carlson sought to figure out, and what they uncovered is that equity is simply racism.

He brought up Chicago Mayor Lori Lightfoot, who "knows who to hate just by looking at them," and has refused to give interviews to white reporters.

"Lori Lightfoot is a monster," he said. "Any society that allows politicians to talk like this has a very ugly future ahead."

"Equity, it turns out, is racism, it's as simple as that: Equity is racism," Carlson said.

"And to be clear, we don't mean racism in the sense that ice cream and Shakespeare and math are now considered racist or that Dr. Seuss is now an exalted cyclops with the Ku Klux Klan. We're not talking about the Ilhan Omar Atlantic Magazine definition of racism."

"No, we mean racism in the literal sense, in the way that Martin Luther King defined the term, which is the act of hurting some people and helping others purely on the basis of their respective races. Bigotry, in other words," he said.

And he brought up the very peculiar case of Chicago Mayor Lori Lightfoot, who decided to only offer one-on-one interviews to journalists who are not white. This was first reported by Mary Ahern of NBC's Chicago affiliate who reported that when she requested an interview, she was denied by the mayor's office on account of her skin color. It was a shocking claim, and one Mayor Lightfoot proudly confirmed.

Lightfoot tweeted: "Diversity and inclusion is imperative across all institutions including media. In order to progress we must change. This is exactly why I'm being intentional about prioritizing media requests from POC reporters on the occasion of the two-year anniversary of my inauguration as mayor of this great city."

Carlson lambasted the mayor for prioritizing reporters based on skin color. "In the name of equity, Lori Lightfoot is refusing to grant interviews to white people. Lightfoot took pains to explain that she doesn't mean that personally. In fact, she conceded that some of the white reporters who cover city hall in Chicago are talented and hard-working. But unfortunately, Lightfoot said, 'they are white nonetheless,'" Carlson quoted.

"So there it is, as plainly as anyone has ever said it out loud. White people are disqualified because they are white, not because of anything they have done, or said, or think. Lightfoot doesn't care about that, she's said so," Carlson said.

Equity has been touted by President Joe Biden as the thing his administration is most interested in implementing. Equity is a key component of the "diversity, equity, and inclusion" craze, but equity does not mean equality. Instead, equity is the concept of an equality of outcomes. And for equity enthusiasts, it doesn't matter how we get to that equal outcome, so long as we get there. That leaves equality sorely lacking.