Two Chinese doctors are facing peculiar symptoms from COVID-19 after the virus has made their skin tone darker following a near fatal encounter with coronavirus. 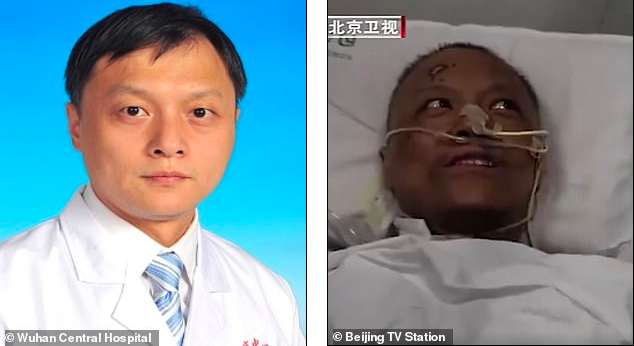 Two Chinese doctors are facing peculiar symptoms from COVID-19 after the virus has made their skin tone darker following a near fatal encounter with coronavirus, according to Daily Mail.

In January, the two 42-year-old doctors, Dr. Yi Fan and Dr. Hu Weifeng both contracted the virus at the Wuhan Central Hospital, while treating patients. The change in their skin pigmentation is a results of hormonal imbalances after enduring severe liver damage.

Fan and Weifeng were both diagnosed on January 18.

Both men were colleagues with Li Wenliang, the Chinese doctor famous for blowing the whistle on the spreading virus. Li died from the illness on February 7. Prior to his death, he was punished by Chinese authorities for making news of it public.

According to China's state media CCTV, the two medics were originally brought to the Wuhan Pulmonary Hospital before being transferred to Tongji Hospital's Zhongfa Xincheng branch.

Dr. Yi Fan had to be put on life-support and was hooked up to an ECMO machine for over a month. An ECMO machines replaces the function of the heart and lungs by pumping oxygen into the blood from outside the body. Dr. Yi Fan told the CCTV that he has made a significant recovery, although he can't yet walk on his own. He described his battle with the virus as traumatizing.

"When I first gained conscious, especially after I got to know about my condition, I felt scared. I had nightmares often," said Yi Fan to reporters. He described a great deal of difficulty in overcoming the psychological hurdle the virus presented but said that fellow doctors were there to comfort him and that counselling has been arranged.

On April 6, the two doctors were featured on a Beijing TV show being interviewed by Dr. Zhan Qingyuan of the China-Japan Friendship Hospital while they were still in bed at the Tongji Hospital.

Weifeng who suffered even worse conditions is still remains in poor health wasn't able to speak but was able to shake hands with Dr. Zhan. Hu has been bed ridden for 99 days and his condition is weak, according to Dr. Li Shusheng who has been treating him. Dr. Li said he worries for the mental health of Hu.

"He could not stop talking to the doctors who come to check on him," Dr Li said.

Dr. Hu was also hooked up to an ECMO machine from February 7 to March 22 which enabled him to regain the ability to speak, on April 11. He remains in intensive care.

The change in skin pigmentation is possibly related to the type of medication that was administered at the beginning of their treatments, suspects Dr. Li.

Dr. Li suspected that the two medics' skin turned dark due to a type of medicine they had received at the beginning of the treatment. One of the side effects is liver damage, which results in a darkening of skin colour. Dr. Li expects that both men's pigmentation will return to normal once their livers recover.