Dave Chappelle pokes at the weak spots of America’s funny bone, causing the entire nation to squam just a bit. He makes us a tad uncomfortable, and even a bit defensive. But it’s at that point that a comedic master like Chappelle can say, “maybe it’s you that needs to calm down a bit.” 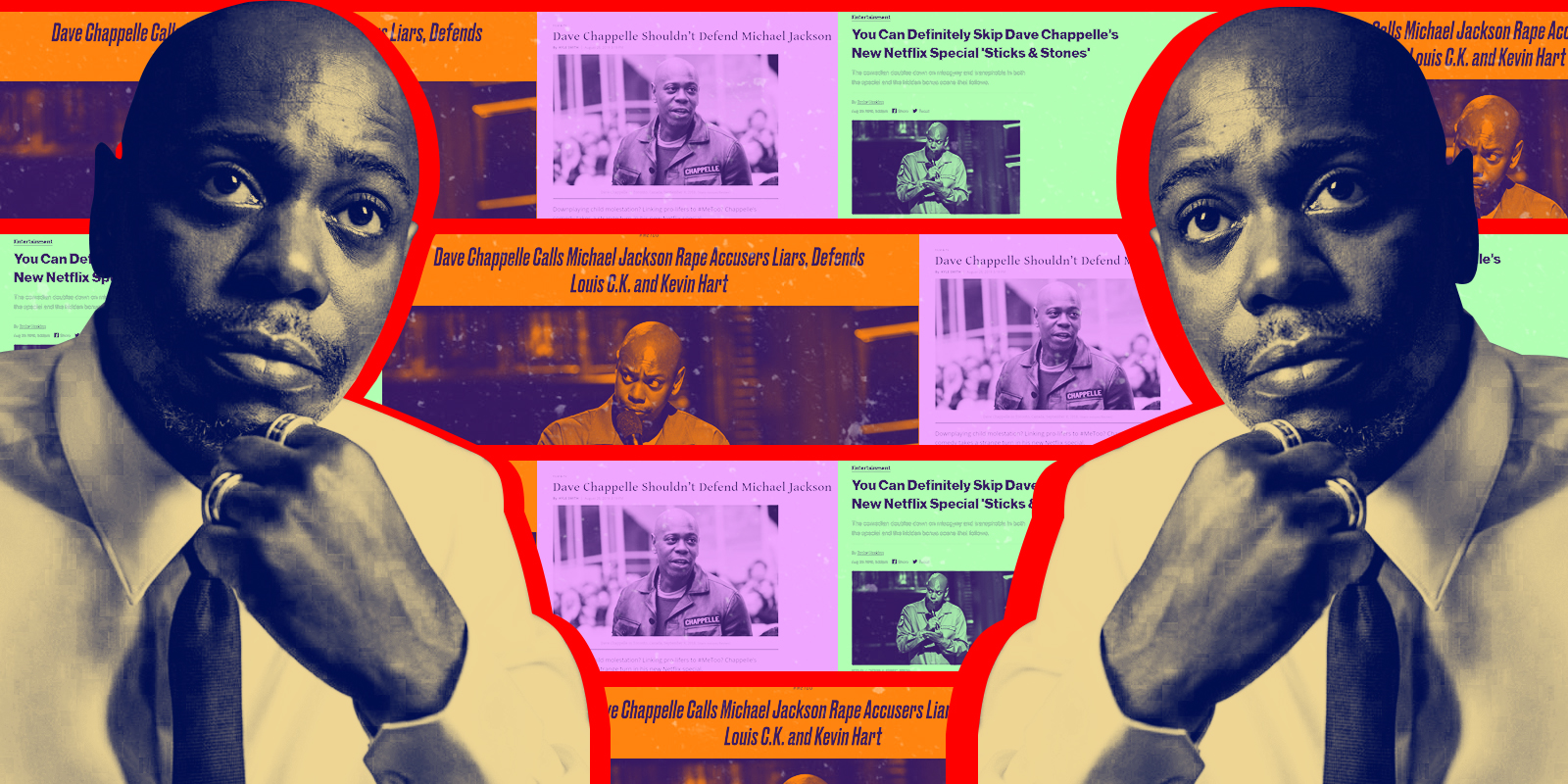 When it comes to comedians, nobody else walks the line of danger and brilliance quite like Dave Chappelle. His third Netflix special after going on a nearly decade-long hiatus—the aptly named Sticks and Stones—is no exception. For just over one hour, Chappelle performs his act in a way only Chappelle can do.

But what would be the best way to measure Chappelle’s success? His crowd was buttery and primed to laugh at just about every punch Chappelle delivered, and Chappelle himself is certainly aware of this. Rather, the best way to tell if Chappelle did a good job, is to see how the culture that he lambastes reacts.

For example, writers from Vice, The Daily Beast, the National Review, and a slew of angry Twitter users will tell you that the special should just be skipped altogether. As Vice argues, “The comedian doubles down on misogyny and transphobia in both the special and the hidden bonus scene that follows.”

In one fell swoop, Chappelle manages to rag on the trans community, cancel culture, and the #MeToo movement—even going so far as to say that the rise of restrictive abortion laws are partly to blame on #MeToo.

Comedy as only Chappelle can do

We aren’t saying that this special is not offensive. What we are saying is that there’s more to his words than if they were to just be transcribed and joylessly read back to you by a humourless drone.

Cutting through the exterior is important when it comes to someone like Dave Chappelle. If comedians are to be thought of as the jesters of society—clever, observational jokers who make poignant and thought-provoking assessments—then it’s interesting to see how quickly the kangaroo courts of comedy turn their backs on a “jester” as soon as his observations aren’t P.C. enough.

The purpose of the jester during medieval times was not just to play a fool who was laughed at, but someone who was able to offer a different perspective on a controversial topic. What Dave Chappelle gives in Sticks and Stones is what our culture needs more of; insight.

A great indicator of this is to do an analysis of his special through the perspective of the two prevailing cultural ideologies, the extreme leftist PC crybullies who are quick to call out wrongthink, and on the other side of that, the MAGA-tribe which are quick to call out “millennials” for being soft, yet have a tantrum if someone kneels during the national anthem.

It’s easy to say that there are people within both of these camps that would abhor Chappelle’s latest work.

From one side of the aisle, Chappelle’s special is vile because — as the Daily mail aptly said —  he “calls Michael Jackson’s rape accusers liars, defends Louis C.K. and Kevin Hart. Certainly, The Beast’s view is held by a number of other outlets, who remind the rest of the world of how truly joyless they are in their perception of the world.

Not just this, but Chappelle goes after “cancel culture” as a whole, at one point having the audience guess an impression he’s doing.

“Uh, duh… Hey, durr, if you do anything wrong in your life, and I find out about it, I’m gonna try to take everything away from you, and I don’t care what I find out. Could be today, tomorrow, 15 or 20 years from now, if I find out, you’re f*cking finished!” says Chappelle, then asking the crowd who his impression is of.

Funnily enough, a few people in the audience can immediately be heard shouting “Trump!”,  an almost pavlovian response, maybe, to having been spoon-fed jokes from the likes of Stephen Colbert and Seth Meyers.

“… that’s YOU! That’s what the audience sounds like to me!” cried Chappelle, who went on to talk about the dangers of a culture where a 15-year-old mistake can come back to haunt you.

On the other side, Chappelle rags on America’s white community, essentially stating that he knows what it must have felt like to be white and not care about the crack epidemic that struck the black community in the ’70s and ’80s. “Just say no! What’s so hard about that?!” As if that’s not enough, he presents a plan on disarming America’s white population, by encouraging blacks to all become legal gun owners.

Of course, all of this and the controversy that comes from it is water off of Dave’s back. Chappelle is a master of his craft and holds a special place in society. He’s a member of the Comedy Mount Rushmore for many, despite his willingness to tread near hot water.

It’s unlikely that one would sit down and watch this special while agreeing with 100 percent of what Chappelle says. That’s not a bad thing.

Dave Chappelle pokes at the weak spots of America’s funny bone, causing the entire nation to squirm just a bit. He makes us a tad uncomfortable, and even a bit defensive. But it’s at that point that a comedic master like Chappelle can say, “maybe it’s you that needs to calm down a bit.”