David Letterman to Kanye West: “you don’t have a say in this”

It’s not about Trump or political ideology. It’s about freedom of expression and freedom of creativity. Kanye is doing what all good artists do—he’s pushing boundaries. All of us would benefit from being more like Kanye. Perhaps then we wouldn’t be so scared to say what we truly feel. 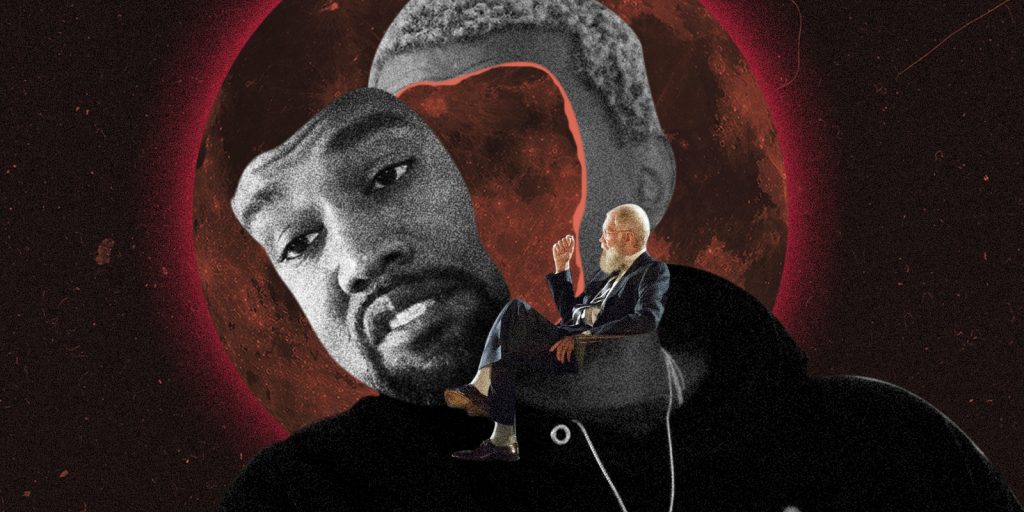 David Letterman launched the second series of his Netflix chat show, “My Next Guest Needs No Introduction,” with a bang last week. His first guest of the series was the embattled icon and artist Kanye West. It’s a highly entertaining episode with some charming moments, including Kanye dressing up Letterman in Yeezy swag, Kim approving of the look, and some genuinely insightful moments regarding the nature of creativity and the challenges of bipolarity.

In a cultural moment where so many people end up cancelled because the social crimes of their views or actions are tried and convicted in the court of public opinion—from which there is no redemption or exoneration—Kanye West’s candor is a welcome respite. He takes inspiration from comedian Andy Kaufman, who performed on Letterman’s show a number of times, taking from his work the idea that “you can take your energy from people telling you you can’t do stuff.”

On his latest album, “Ye,” which features the quip “I hate being Bi-Polar, it’s awesome” on the cover, he reframes his bipolar mental state as a strength, something that gives him a super power, a perspective, and a light that doesn’t come from normative brain function. We could all take solace from this view. There is something to knowing and understanding your mental function without criticizing it.

He’s a provocateur and, frankly, we need more artists who are willing to speak their minds, who are unafraid to say what people are afraid to hear. He says “I think I use art as a superpower to protect myself in a capitalistic world. And then I give it as a gift to other people, and also I can  use it to make money.”

Kanye is honest and true to himself. He has an earnest drive toward creativity in all forms that call to him, including a love of contemporary art, from Takahashi Murakami to James Turrell. Letterman is a great interviewer, and it’s to his credit that so much insight and so many concepts were able to be covered in this short amount of time.

But it’s when Kanye mentions Trump that the interview gets really real—or as real as Letterman permits it to get. Kanye is in the middle of explaining how he harnesses energy to make art: “This is the thing. We don’t all have to feel the same way about things. This is my thing about Trump. We don’t have to feel the same way. But we have the right to feel what we feel. And we have the right to have a conversation, a dialogue, not a diatribe about it. Like when I wear the [MAGA] hat. It’s not about politics. It’s not about policies. For me, once again, fear. I got people that I work with, black, female, all different types of people that I work with. Love Trump. Voted for Trump. Scared for life to tell anyone.”

Letterman winces. This is not where he wants to go. “Did you vote for Trump?” he asks.

Letterman shot back: “Then you don’t have a say in this.”

To be fair, these are two entertainment titans speaking as equals, but it is a little condescending on Letterman’s part. There are plenty of “democracies” in the world where voting is mandatory, and the lack of freedom in those cultures is stunning. The very notion that you don’t have a political say if you did not vote is peak, bourgeois, boomer elitism. Many of the scolds who would make such a claim would also lobby to have the voting age lowered. How’s that for incoherence?

Kanye looks out at the audience and speaks to them directly. “I had a say when I said what I said.” He goes on to say that “definitely liberals bully people who are Trump supporters.”

“The thing is,” he tells Letterman, “in America we have rights, and we have rights to open the conversation.” It doesn’t matter to Kanye what the views necessarily are, but that all people have a right to hold and express the views that matter to them. Kanye asks Letterman straight up: “Have you ever been beat up in your high school for wearing the wrong hat?” Letterman dismisses this with a joke, but acknowledges that he knows what Kanye means.

It’s Letterman’s resistance—and resistance is the perfect word–to this fundamental truth that reveals the political and cultural reality that we face these days. The Trump Resistance movement has blinded people to the extent where friends and family members are no longer speaking. Trump is not a person or a president—he’s a folk devil. And this folk devil has emboldened people to commit acts of violence on conservatives for wearing the wrong hat. Letterman knows this, but can’t quite bring himself to acknowledge it. Instead it’s on to the next question.

Whether Trump is a good or bad president is not at issue here. It’s about the fact that his cultural symbolism is set in stone in the world of the elite. For Letterman, tolerance for Trump or empathy for his supporters are simply off limits, and Kanye, being a rebellious soul, can’t help but explore that territory.

Letterman’s squeamishness makes Kanye’s point for him. And it bears repeating: Kanye had a say when he said what he said. What a perfect response to a politically correct scolding. It’s not about Trump or political ideology. It’s about freedom of expression and freedom of creativity. Kanye is doing what all good artists do—he’s pushing boundaries. All of us would benefit from being more like Kanye. Perhaps then we wouldn’t be so scared to say what we truly feel.