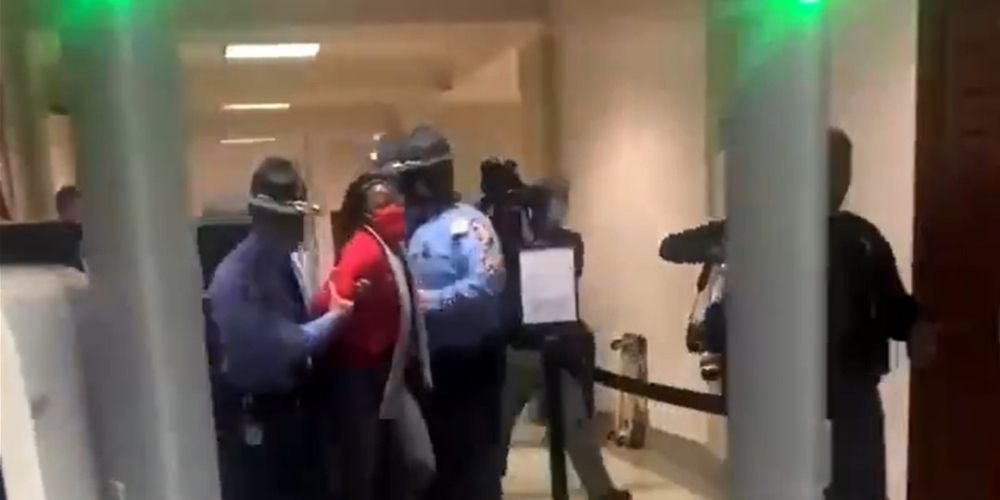 Georgia State Patrol proceeded to arrest Cannon after she allegedly knocked on the Governor’s door and interrupted the Governor's live-stream announcing that he had signed the elections bill into law during General Assembly.

Representative Cannon, who was released on bond Thursday night, was with several other protesters when she interrupted session indicating that the public should be allowed to witness the signing of the controversial transformative elections bill.

"She knew he was signing a bill that would affect all Georgians — why would he hide behind closed doors? This isn’t a monarchy," said Tamara Stevens, a protester that was with Cannon. "You have a women of color fighting for the rights of Georgians and they arrested her for knocking on the door because she wanted to witness our governor sign the bill."

According to Georgia State Patrol, representative Cannon was arrested for refusing orders that required her to stop knocking on the Governor’s door. "She was advised that she was disturbing what was going on inside and if she did not stop, she would be placed under arrest," said GSP spokesman Lt. W. Mark Riley. "Rep. Cannon refused to stop knocking on the door."

Court Documents indicate that Cannon was charged with "knowingly and intentionally" knocking on the governor’s door during a bill signing as well as repeatedly stomping on and officer’s foot.

According to the Georgia State Constitution, legislators are "free from arrest during sessions of the General Assembly" except for charges of treason, felonies or breach of the peace, AJC reported.

The democratic representative was arrested on a separate occasion for protesting the elections bill earlier this year during a different confrontation with a Capitol police officer which resulted in sit-in by Cannon and fellow Democrats on the stairs of the state Capitol.

On the other side of the door, Governor Brian Kemp was proud to sign the elections bill that aims to uphold the integrity of future elections. "I was proud to sign SB 202 to ensure elections in Georgia are secure, fair, and accessible. I appreciate the hard work of members of the General Assembly to make it easy to vote and hard to cheat," Governor Kemp said in a tweet on Thursday.