DeSantis said in a press conference he acquired 3,000 doses of Sotrovimab, manufactured by GlaxoSmithKline (GSK). 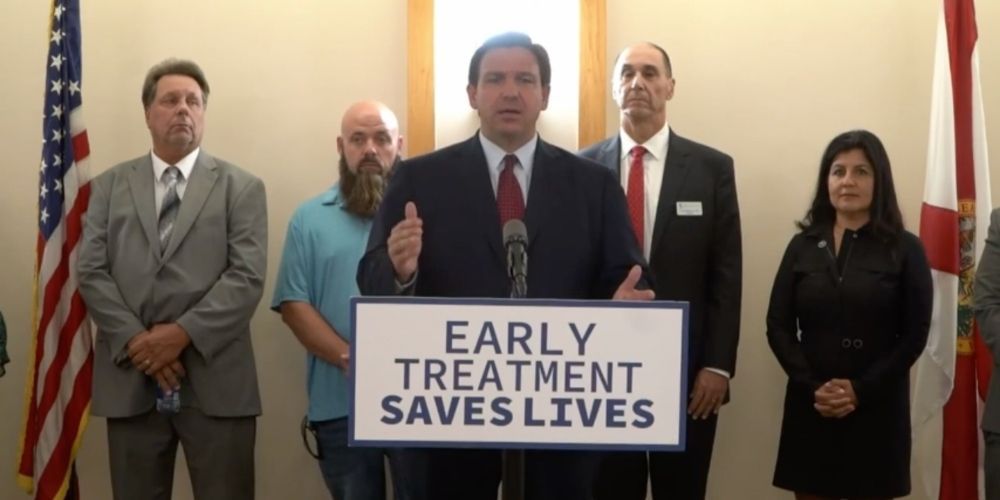 On Thursday, Florida Governor Ron DeSantis announced he had secured additional doses of the lifesaving monoclonal antibody treatments the Biden administration significantly cut to his state. DeSantis said in a press conference he acquired 3,000 doses of Sotrovimab, manufactured by GlaxoSmithKline (GSK).

"It got emergency use approval just a few months ago. The clinical data that they had was really, really strong. In fact, that was even stronger than Regeneron," said DeSantis. "And we know Regeneron has been very, very effective and in the real world."

"So we're going to be able to use that Sotrovimab to bridge some of the gaps that are going to be developing as a result of the Biden administration cutting — dramatically cutting medications to the state of Florida," DeSantis continued.

Earlier in his speech, DeSantis slammed the Biden administration for drastically cutting the number of doses his state received after the administration took over control of distributing the treatment from the states.

"Cutting the medication to Florida and other states is wrong. It's not consistent with the promise that was made just a couple of weeks ago. And we are going to continue to fight against that," added DeSantis.

"And so yes, we have much lower hospital numbers, much lower cases, everything like that is much better than it was a month ago," he continued but noted "COVID doesn't go away." The rate vaccinated people are testing positive is increasing in pace from six months ago.

"And so we know there's going to be a continuing need to make this early treatment available for folks," said DeSantis.

DeSantis' action comes after expressing his displeasure last week with the Biden administration for withholding the treatment from the state.

"What the HHS and the Biden administration is now doing is they're saying that all of the reduced amounts will go to the state, and we're responsible not only for sourcing our sites, which we're happy to do but any infusion center," he continued.

"Any provider, any hospital will have to come through the state, and to spring this on us starting next week, we're going to have to do that. There's going to be a huge disruption, and patients are going to suffer as a result of this," DeSantis added.