After disgraced New York Times journalist Taylor Lorenz was busted for her false charge against an innocent entrepreneur, the internet culture reporter is now promoting an anti-harassment campaign and equating the criticism she's faced with "online violence." 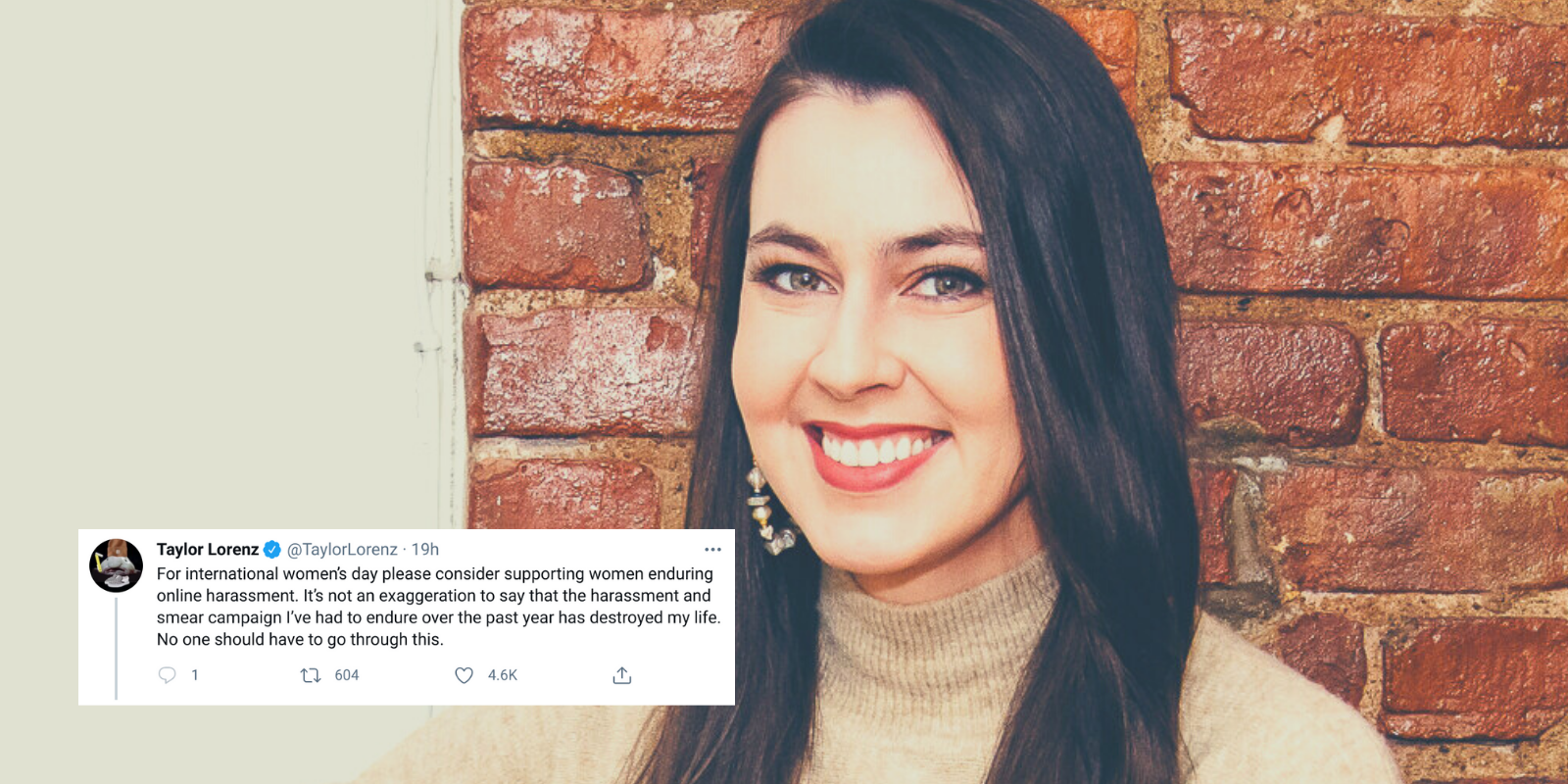 After disgraced New York Times journalist Taylor Lorenz was busted for her false charge against an innocent entrepreneur, the internet culture reporter is now promoting an anti-harassment campaign and equating the criticism she's faced with "online violence."

In her previous self-own, the tech writer faced intense backlash when she was eager to slander venture capitalist Marc Andreessen last month over her false claim that Andreesen said the word "retarded" in an online audio chat room on the social media app Clubhouse, which the Silicon Valley head is an investor in. A moderator of the chat and several defenders of Andreessen said he never used the reported slur. Instead of correcting the false allegation or issuing an apology for the inaccurate report seen by thousands, Lorenz doubled down with an insufficient excuse for the slander, deleted the tweets, and went private on Twitter.

Considered one of the loudest, most persistent online bullies herself with an imposing history of perpetrating harassment, Lorenz has since reached for the victim card on the global holiday that commemorates the cultural, political, and socioeconomic achievements of women around the world.

"For international women's day[,] please consider supporting women enduring online harassment," tweeted Lorenz overnight on Monday. "It's not an exaggeration to say that the harassment and smear campaign I've had to endure over the past year has destroyed my life. No one should have to go through this."

Lorenz urged others to support those dealing with harassment, never downplay what they've experienced, tell victims to ignore abuse, or "ask them to rebut baseless attacks on your podcast for clicks." She insisted that "[u]sing someone else's deep pain and suffering for clicks/listens is offensive, gross and cruel."

Then she pivoted to disclose some of her own purported trauma, but the "scope of attacks has been unimaginable," Lorenz narrated. "There’s no escape. It has taken everything from me. The only mild solace I've found is w/ other women who have had their lives destroyed in the same way. We've developed deep trauma bonds."

Lorenz implored activists to call out misconduct, support female colleagues in addition to people of color, and "don't fall victim" to what she called "bad faith attacks." She told her follows in the same thread to not "mistake harassment for '[T]witter drama' or frame it as a two[-]way street."

"I'm grateful to everyone building tools in this space and the tech leaders who make safety for *all* users a priority," Lorenz commented. To tackle the issue, she applauded technological innovation, cultural change, and supportive systems.

She went on to praise another initiative produced by ICFJ that analyzed the "onslaught of online violence" directed over five years at Filipino journalist Maria Ressa who co-founded the Manila-based news site Rappler.

"Please read every word of this and try to understand the scope of the problem," Lorenz wrote of the collaborative case study. "These attacks are about destroying women journalists lives and credibility and, in many cases, it's working."

"Thank you to the @IWMF and @ICFJ for recognizing these attacks for what they are and for the work they’re doing to connect women journalists around the world with tools and resources they need to combat online violence," she commended.

If Lorenz thought she was immune from the poison that she and other shameless establishment husks have been spreading, she was wrong. Lorenz even limited replies to her Twitter thread when numerous users spotlighted the glaring hypocrisy and brazen invocation of the sought-out victim status. However, she could not prevent her political adversaries from quote tweeting her.

The Intercept co-founder Glenn Greenwald pointed out that Lorenz is one of the star reporters at "the most influential newspaper" in the United States where her work is often spotlighted on the news outlet's front page. "Her attempt to claim this level of victimhood is revolting: she should try to find out what real persecution of journalists entails," quipped Greenwald.

"If you're going to insinuate yourself into polarizing political debates and report (or pretend to 'report') on the powerful, you'll be 'attacked' online," Greenwald advised. "It can be extra toxic due to race, gender, sexual orientation, etc[.] but it's still just online insults. That's not persecution."

Given "all the suffering and deprivation and real persecution in the world," Greenwald called it "astonishing" how often "coddled, well-paid," and protected elites "posture as the world's most oppressed class." He considered the behavior "quite sickening and offensive," uploading an image of The Enemy of the People: A Dangerous Time to Tell the Truth in America by CNN's egocentric Jim Acosta who served as the left-wing network's White House correspondent during the Trump administration.

Lorenz responded to Greenwald in the same series of tweets: "It's not ok. Female journalists, stars or not, should not have to endure harassment for doing their job." She labelled Greenwald's statements as "the type of threatening dog whistle commentary that contributes to harassment campaigns."

"For this International Women's Day[,] please take a moment to remember the New York Times reporters who are suffering right now," remarked New York Post writer Jon Levine in opposition. Anti-cancel culture pundits piled on who have advocated against online mobs in the past. But when it comes to Lorenz, the well of sympathy appears to have run dry across the social media platform.

New York Times freelancer Jenn Morson argued that criticism is not synonymous with harassment. Then Tracey fired back that the "new framework being promoted by Taylor and legions of other journalists rushing to her defense" attempts to expand the definition of "harassment" and online "violence" in order to "insulate themselves from criticism as public figures."

"The most extraordinary part of all this is that the only reason anyone is talking about Taylor Lorenz is because she twice fabricated serious accusations about someone, so by equating criticisms of her with 'abuse,' she gets to somehow become the victim and her sins are absolved," added Greenwald, describing the privilege "playbook which media elites use to immunize themselves against criticisms from the riff-raff."

Greenwald exposed Lorenz back in February for acting as an online hall monitor deputized by The New York Times to tattle on and silence those whom the corporate media dislike. "Journalists are not the defenders of free speech values but the primary crusaders to destroy them," Greenwald wrote at the time.

Lorenz has dominated the citizen surveillance beat for years. In 2018, she doxxed Instagram-famous teenagers for the high crime of having parents with conservative political beliefs. The Daily Beast had boasted Lorenz's exclusive report that helped to cancel the talk show hosted by the Oshry sisters, the daughters of right-wing commentator Pamela Geller.

When the New York Times published an op-ed by Sen. Tom Cotton last summer, entitled "Send in the Troops," Lorenz was one of the outspoken employees who alleged that the opinion page's decision had placed black staffers "in danger."

Lorenz has demonstrated that she is for shutting down anyone or any speech that she dislikes or finds "dangerous." She even admitted this ideology in an interview with "Blocked and Reported" podcast host Katie Herzog on cancel culture in 2019.

"I think the way people use 'cancel culture' is this shorthand way of dismissing whatever accusations are against them," Lorenz told Herzog for The Stranger. "My general take on it is that it's very toxic but also necessary. We are in the correction phase right now and everyone is indiscriminately calling each other out, and that's because we're working to set new standards and norms as a society."