What do we gain from hoisting the bodies of beloved 20th century icons? Dancing with the dead is a clear sign of a culture unaware of what harm they are doing to themselves. 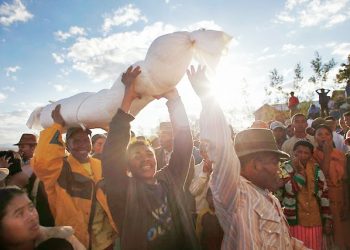 A peculiar tradition in the island nation of Madagascar has the world scratching their heads. Famadihana, literally “the turning of the bones,” is a ceremony performed by the Malagasy people, in which they dig up the dead bodies of loved ones, rewrap the corpses in fresh cloth, rewrite their names on the cloth, and then dance to live music while carrying the corpses over their heads. The bodies are then returned to the family tomb, where they will lay to rest forever.

Famadihana is a custom of unknown origin, though scholars believe that it originated not too long ago, sometime in the 17th century. It’s a chance for families across the country to join eachother, and remember their relative as they were, celebrating their life and saying goodbye one last time.

In the West, many will look at such a ceremony as primitive, unsanitary, and unnecessary. It’s best to let sleeping dogs lie,  right?

But recently, our media has taken a page out of the books of the Malagasy people, and it’s become fashionable to dance with the dead.

We have decided that we are no longer going to let them rest, but instead, we are going to dig up their corpses and shame them for their wrongdoings.

The problem with dancing with the dead is that it can make you viciously ill. Reported cases of the plague on the island nation have consistently been higher than the global average, experiencing two outbreaks of bubonic and pneumonic plague in the 21st century. In 2014, 40 died, and in 2017, 221 died. Experts are suggesting that the Malagasy people have been spreading illness by dancing with dead bodies.

A ballet with bodies

What do Albert Einstein, Michael Jackson, and John Wayne all have in common? All three were beloved figures within their own fields during their time here on Earth. But recently, each of these 20th century icons has been publicly shamed, without them even being around the defend themselves.

Just last year, Albert Einstein underwent public shaming seemingly out of nowhere, as journals of the German-born genius were released onto the web. Private writings reached the hands of the wrong people, and were made public.

In the journals, Einstein goes on several tangeants where he heavily criticizes the Chinese people, writing that “Chinese [people] don’t sit on benches while eating, but squat like Europeans do when they relieve themselves out in the leafy woods.” He wrote that they were “herd-like,” and that “even the children are spiritless and look obtuse.”

Einstein, who had also said racism was “a disease of white people”, added “It would be a pity if these Chinese supplant all other races. For the likes of us the mere thought is unspeakably dreary.”

Why are we trying to cancel Albert Einstein? Why would we want to tarnish the reputation of the world’s most celebrated scientist? Thankfully, the cancellation of Albert Einstein didn’t come to fruition, because of widespread support of his statements. Who was supporting these heinous statements? Was it nazis? White supremacists foaming at the mouth, ready to defend all racist acts? Nope. The people who came to Einstein’s defence were Chinese people themselves.

“This is called insulting China? That’s ridiculous. Did the Chinese in that era look dirty? When I see the photos from then, they look dirty, Einstein depicted the true state of that era,” said one Weibo user.

The father of modern Chinese literature Lu Xun, who was known for his use of satire to depict early 20th century society, was used to contrast Einstein. “We praise Lu Xun because he pointed out our disadvantages. Why should we blame Einstein for this?”

The King of Pop, Michael Jackson, was an obvious target for trigger-happy shame mongers. The 2019 documentary Leaving Neverland filed through Jackson’s hotly disputed history at his Neverland ranch.

Jackson had made news countless times for his behaviour, including a 1993 sexual abuse accusation by a 13-year-old boy named Jordan Chandler. The police investigation was inconclusive and no charges were filed, though Jackson did settle out of court with the Chandler family for $22 million.

Jackson was again the centerpiece to assault accusations in 2004. According to Wikipedia, Jackson was indicted for four counts of molesting a minor, four counts of intoxicating a minor to molest him, one count of attempted child molestation, one count of conspiring to hold the boy and his family captive, and conspiring to commit extortion and child abduction. He pleaded not guilty to all counts. The trial spanned approximately 18 months, from Jackson’s arraignment on January 16, 2004 to June 13, 2005. The jury delivered a verdict of not guilty on all charges, including four lesser misdemeanour counts.

So with Jackson unable to defend himself on account of being dead, a hitjob on the king of pop would be all too easy. With kangaroo courts all the rage today, a guilty verdict was quickly assigned to Jackson, leaving his family to deal with the backlash. The Jackson estate has just today released a statement, claiming that the allegations in Leaving Neverland are false.

So, what was Wayne guilty of? In a 1971 interview with Playboy Magazine,  Wayne said some less-than-stellar things about race relations in the U.S.

With a lot of blacks, there’s quite a bit of resentment along with their dissent, and possibly rightfully so. But we can’t all of a sudden get down on our knees and turn everything over to the leadership of the blacks. I believe in white supremacy until the blacks are educated to a point of responsibility. I don’t believe in giving authority and positions of leadership and judgment to irresponsible people.

John Wayne was being snatched out of his coffin and danced around with. The Playboy interview resurfaced, which resulted in calls for John Wayne Airport to be renamed. John Wayne’s son Ethan defended him, stating, “It would be an injustice to judge someone based on an interview that’s being used out of context.”

What do we gain from hoisting the bodies of beloved 20th century icons? Dancing with the dead is a clear sign of a culture unaware of the harm they are doing to themselves. We are all getting sick from the actions of those who do not let the dead rest in peace.