A white man holding a black baby while council discussed the topic of integration is being alleged as an act of racism. 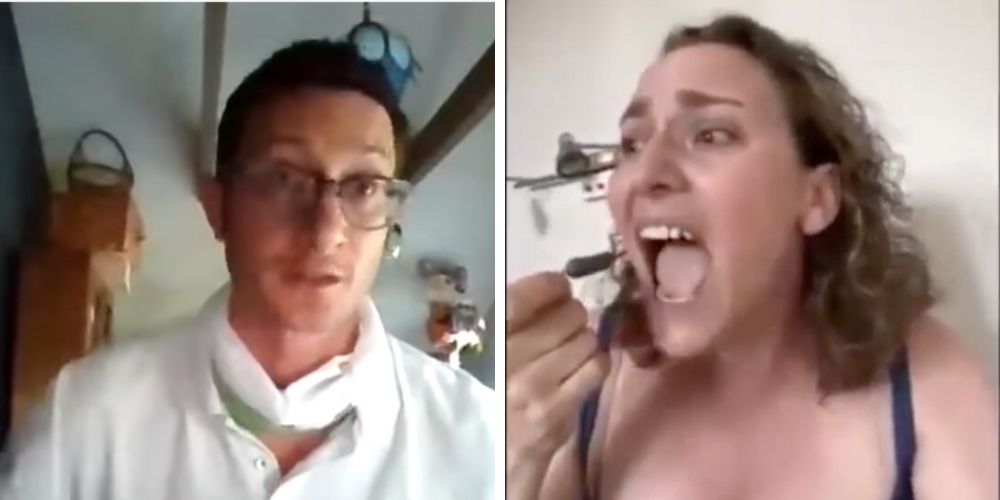 Unhinged, self-hating white people are taking over the conversation around education in New York City. Filled with shame for the sin they can never be absolved of, white supremacy, these people demand reeducation for anyone who disagrees with them.

It’s enough to make parents question whether schools should even reopen as they are currently configured.

District Two, which covers a swath of some of the wealthiest areas of Manhattan, met to discuss an alleged incident of racism that happened during the June 11 council meeting. At that time, council member Thomas Wrocklage had long-standing family friends visiting for the day. He held his friend’s nephew on his lap.

Holding the baby while council discussed integration is the alleged incident of racism. Council members who saw a white man holding a black baby while saying that integration was possible were horrified by the “racist” act.

Council member Robin Broshi was one of those who was beside herself with humiliation and shame at having witnessed this incident of alleged racism. When asked by council member Benjamin Morden to explain just what Wrocklage had done, Broshi said:

“And they give me a hard time,” Broshi went on, “because I’m not vocal enough. And I’m not trying to be a martyr… You think I’m a social justice warrior, and you think I’m being patronizing, and I’m getting pressure for not being enough of an advocate, and I take that to heart, and it hurts me, and I have to learn how to be a better white person. You don’t have people telling you that.”

Wrocklage asked “I would like to know before this meeting adjourns, how having my friend’s nephew on my lap was hurtful to people and was racist. Can you please explain that?”

As part of her opening remarks, CEC District Two President Maud Maron spoke of the “incredibly important work of desegregating our district” and said “I stand firmly and unequivocally against racism.”

Broshi said “We had over 100 parents write you a letter explaining why a member of this council was extraordinarily offensive and racist during a meeting… A member of our council was racist and you did nothing.”

“And I did nothing,” Broshi said. “And I’m ashamed I did nothing. And I can sit here on a public meeting and say I’m sorry, I made a mistake,” her voice tremulous. “I didn’t speak out verbally when multiple times during a meeting one of the members of our council engaged in behaviour that made me ache and hurt for the non-white... And that is my failure. And I can say that.”

Edward Irizarry, the vice president, took the floor. “You, in your comfortable white world can tell us about how we ought to reach down and help the poor Latino, and help the poor black, condescendingly look at us as though we are inferior.” His voice shook with anger.

“Because never, do I see anyone, or any of these advocates, really in communion with these poor students that are not getting the education that they deserve… We don’t want handouts… Cosmetic diversity, that’s what you’re looking for, you’re not looking for true change. You’re not looking to really educate all of the people of this district.”

Broshi discovered yet another opportunity for her to show off her willingness to take the blame of white supremacy squarely on her own shoulders, to exhibit her ability to apologize.

“Edward I want to apologize to you… and you don’t have to accept my apology. Everyone has work to do. And I have work to do. I have 40 plus years of white supremacy I need to undo.”

Her voice quavered with something like pleasure. “And I hear what you’re saying about what white saviour complex is that this idea of throwing non-white students a bone... I shouldn’t have minimized your voice.”

Wrocklage asks for clarification on what was racist about holding a baby, accusing Broshi and those who sided with her of slander.

Broshi said “Tom, when you said ‘my living room is integrated right now’ in response to systematic racism—”

“No, you had friends over,” Broshi corrected. He asked her to define integration.

She screams, “I owned up to it in this meeting! Right now, when I apologized to Edward… And we should apologize when we offend people of colour! When they get upset. When they say this is a harmful space, when they log out of a meeting immediately because they see white people exhibiting their power over people of colour… If you can’t even read a book about White Fragility or Ibrahim X. Kendi, I can’t sit here in a working business meeting and educate you about the distinction between interpersonal racism and systemic racism.”

Broshi can’t educate Wrocklage because she doesn’t have any idea what she is talking about.

Emily Hellstrom elaborated on that explanation, “You had a smirk and a grin on your face when you pulled that child in… you in a joking tone, said ‘my living room is integrated right now’… as if, as if, the hundreds of years of first slavery and then segregation were nothing, would go poof, because you happened to have a black friend… So the fact that—and perhaps you didn’t intend it to be racist—and that does not matter, actually, was racist… You need to look deep inside and say ‘wow, I hurt a lot of people.’ Whether you intended to or not, you did.” She demanded his apology.

Wrocklage explains “I was also laughing at the absurdity of the cognitive dissonance of people like you. People exactly like you, who are telling people of colour how they should feel. How absurd that is.”

Council member Vincent Hom said he would like to know what was racist, without being told to read a book.

Council member Shino Tanikawa took the floor and said “If you’re not willing to read then you’re not doing the work. And this is work we all have to do. And you can disagree with people but this is not an ideological difference. This is how black and indigenous people of colour see the world. And it’s not for you and me—East Asian affluent person–to deny that reality. And we have to get on board, we have to understand what these people are telling us, we have to do the work, we have to get uncomfortable. But I don’t see some of you willing to do that uncomfortable work.”

For Tanikawa, Hellstrom, and Broshi, for advocates of critical race theory, the work involves first educating yourself until you recognize your failure, confessing sin, penance, and always silencing your own critical judgement in favour of the view of critical race theorists. It requires the assumption, too, that all black, Indigenous, persons of colour are on board with critical race theory. It requires a belief that white people are inferior and can never be good enough to share equal voice or equal space with, as Broshi calls them, “non-white” people.

Tanikawa continued, “When somebody tells you that you did something wrong, the first thing to do is reflect on that and then apologize, even if you don’t agree, you apologize... That is what grown-ups do.”

Hom said “So it’s okay for you to call Tom not-grown-up now? Is that what you’re saying?”

Wrocklage said that he has asked for an investigation to determine whether holding a baby was a racist act.

Hom noted that any investigation would necessarily be a secret one, and its existence would not be revealed until the investigators had come to a decision. “So if there was actually an investigation going on they wouldn’t tell you it was going on until they’re done.”

Hom advised people not to comment on the secret investigation, in the event that if it were going on, it would be compromised by comments. He noted that the council would not be aware that an investigation has been conducted until it was concluded and “a decision had been made.”

No one seemed particularly concerned about the potential existence of secret investigations into Wrocklage’s alleged act of racism. Perhaps none of them have read Franz Kafka or Vaclav Havel.

Tanikawa said that “most forms of racism today are not the kind that warrant an investigation. These are called microagressions… It’s about being curious, being open-minded, and having the desire to understand why our system is the way it is and what we as individuals are doing about it… it’s about looking inward to see what you are doing to perpetuate the system that exists.”

Wrocklage jumped back in and said “my friends like to be treated like people, and I would like to know what microaggressions occurred when I had my friend over in my living room, and had her nephew on my lap… I don’t understand.”

Hellstrom said “Having black friends in your living room is not integration.”

“That’s where it starts,” Wrocklage said.

Education is in trouble and it’s getting worse. Critical race theory has come for school children, and for those who don’t adhere, punishment is swift and unrelenting. White people who take up the cause educate themselves in the required literature and spit mandatory talking points. They demand that those who do not agree apologize anyway, confess their racism, and instead of taking true action in the public sphere, turn in on.

Looking at American society through the lens of critical race theory will create images, reflections, and shadows of racism in every corner and crevice of discourse.

Critical race theory denies that progress has been made. It denies us the ability to see ourselves as anything other than a country so damaged it needs to be burned down, our history relegated to dust heaps, our ideas of solidarity, equality, and honesty chucked into the harbour like so many statues of long dead presidents.

There is a blissful, sublime agony for women like Broshi and Hellstrom who in ecstasy express their shortcomings, who claim racism as their own personal sin while calling out society’s racism. Yet they believe that society is something bigger than a collection of individuals, that society itself holds the power and that individuals do not.

We can choose how to view ourselves and our nation, we can choose the story we tell of America, we can triumph of our successes. If we choose to tell a story about how we all suck, then being trash is our future. If we tell the story of liberty, then we will be liberated from those burdens we drag along with us. It's up to us who we want to be. One thing is for certain, these are not the people we want educating or determining education policy for the children of any race in America.

The Post Millennial reached out to CEC District Two council members and have not received a comment at time of writing.