"As is obvious to all but the media, there is not one permanent ban on even the most far left account spouting utter lies. Not even Associated Press with their completely fictional report on Russian missiles hitting Poland..." 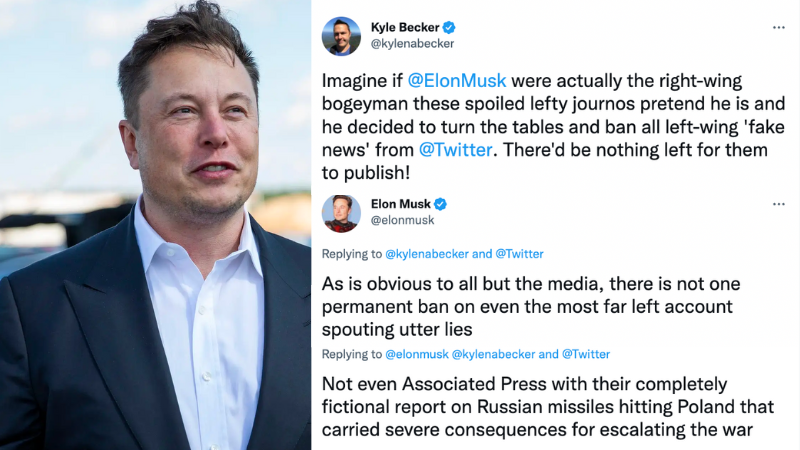 Libby Emmons Brooklyn NY
Nov 22, 2022 minute read
ADVERTISEMENT
ADVERTISEMENT
Elon Musk responded on Tuesday to critics who claimed that he is mishandling Twitter and caving to right-wing journalists and pundits on the platform, saying that "there is not one permanent ban on even the most far-left account spouting utter lies."

"Imagine if Elon Musk were actually the right-wing bogeyman these spoiled lefty journos pretend he is and he decided to turn the tables and ban all left-wing 'fake news' from Twitter," Kyle Becker opined. "There'd be nothing left for them to publish!"

"As is obvious to all but the media, there is not one permanent ban on even the most far left account spouting utter lies," Musk replied. "Not even Associated Press with their completely fictional report on Russian missiles hitting Poland that carried severe consequences for escalating the war."
Former AP journalist James Laporta nearly started World War 3 by falsely reporting that a Russian missile had struck Poland, killing two. Laporta was fired, but not before his report, citing an anonymous US official, caused an international diplomatic incident.

It was later revealed that the missile did not come from Russia.

Later, the AP reported that "three US officials," speaking on condition of anonymity "because they were not authorized to discuss the matter publicly," said preliminary assessments suggested that the missile was fired by Ukrainian forces at an incoming Russian missile to defend against an attack on Ukraine’s electrical infrastructure. This was a contradiction of Laporta's account.

US President Joe Biden said it was “unlikely” that the missile had been fired from Russia. The Pentagon said, "We have no information at this point in time to corroborate the press reports regarding allegations of a Russian missile strike on Polish territory." Russia has denied any involvement in the explosion in Poland.

This was not before Ukrainian President Volodymyr called the missile blast "a very significant escalation."

"We need to put the terrorist in its place," he said. "The longer Russia feels impunity, the more threats there will be for everyone within the reach of Russian missiles."

In the event that Russia was to launch any kind of incursion into Poland, the US and NATO allies would begin discussions of taking action against that aggressor, in this case, Russia, and would likely decide to unequivocally defend Poland and the western European continent.

The only problem, of course, is that US and Russia are both nuclear powers, and a war between the two nations has the very real potential in triggering the use of nuclear weapons, a humanitarian and existential threat to the existence of humanity.

Musk has been blasted by critics on the left, despite having been insistent that Twitter, under his leadership, would be a bastion of free speech, something the left used to stand for without hesitation.
ADVERTISEMENT
ADVERTISEMENT
musk ap ukraine