Brooks had been in the DC area to participate in the ongoing convoy that is currently basing itself out of the Hagerstown Motor Speedway. 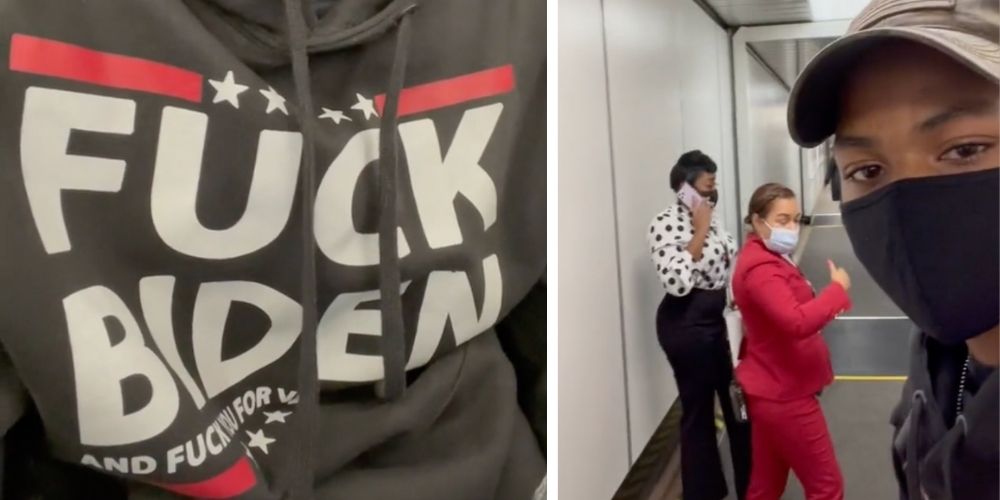 A black man was allegedly kicked off a Delta Airlines flight recently for wearing a "f*ck Joe Biden" sweatshirt, with a flight attendant telling him that that was the airlines policy, despite a representative saying no such policy is in place.

Video posted to TikTok by the man, who identified himself as Jauneil Brooks, showed him being informed by a flight attendant that his sweatshirt goes against the airline’s policies, and requested that he turn it inside out, or be kicked off the flight.

"If you don’t come on the jet bridge, and flip your shirt outside in and out, right? So that word doesn’t show, I will have to deplane the whole aircraft," the flight attendant said.

"I’m sorry about that sir, but that is the policy, you cannot wear that," she continued, adding that she was advised if he doesn’t, Brooks would be placed on a no-fly list.

When questioned by Brooks to be shown the policy, the flight attendant said they can look at the policy on the computer outside the aircraft, to which Brooks shot back that if it is online, she should pull it up on her phone.

The flight attendant said that would be inconvenient, to which Brooks said: "no, you’re making this inconvenient, because last time I checked, I live in the United States of America, with the First Amendment freedom of press, freedom of speech, or freedom of religion, do I not?"

"Do I not have the freedom of press, freedom of religion or freedom of speech anymore in this country?" Brooks continued.

"It’s not that simple. My dad served in the military so I got the freedoms today. And now you’re telling me I have to take off my hoodie," Brooks said.

Video showed Brooks later complying with the airlines demands and taking off the sweatshirt, but was then told that he would have to get off the flight, with the flight attendant saying that he wasn’t complying with masking regulations, despite taking the mask off temporarily to remove his sweatshirt.

"So I’m still getting kicked off the plane?" Brooks asked.

"I literally just took off my hoodie," Brooks said. "If you ask me nice, I will put back on the mask which I was doing as you came back up here."

The flight attendant responded that she was just relaying the message from the captain.

As he was leaving the flight, Brooks told the camera, "This is, wow. This is one day after sitting down with Senator Ted Cruz and Senator Johnson in a Capitol building. I get kicked off for wearing a hoodie, which I made a phone call, he said to take it off to get to my destination. Took it off, I took it off, and I’m still getting kicked off the airplane.

Brooks told The Post Millennial that this incident occurred during a layover between Nashville, Tennessee, and Los Angeles, California, in New York.

Speaking with a supervisor at the airline’s gate, she said: "So based on what my team has advised me, is that you were wearing this obscene shirt, which they asked you to remove and you refused to remove, as well as you weren’t being compliant about your mask."

"I took off my mask so I could take off my hoodie," Brooks responded. "There’s video of me taking off my hoodie, and I’m sitting back down with my hoodie off, and then putting back on my mask as soon as she came back. So I don’t know where this is coming from, it’s all on camera."

"So I can only go by what I was advised," the supervisor stated, who added that the crew asked that Brooks be removed from the flight for not wearing the mask, and wearing a sweatshirt that is not permitted on Delta flights.

It was later revealed though, that no such policy exists at Delta.

"So technically I can wear a shirt that says 'F Trump'?" Libs of TikTok asked.

"Oh. No worries. There are no clothing policy on Delta’s [sic]. You can wear anything you want."

Brooks had been in the DC area to participate in the ongoing convoy that is currently basing itself out of the Hagerstown Motor Speedway.

Video on Brooks TikTok account show him sitting down with other convoy participants and organizers alongside Senators Ted Cruz and Ron Johnson.

"Yeah, it's crazy how just the day before I was sitting in the room with Senator Ted Cruz and Senator Johnson about how our freedoms are being stripped away. And, you know, I guess it's just the right timing, but I'm gonna fight for our freedom of speech, and companies can't be taking advantage of American people anymore. Just because their pockets are huge," said Brooks.

"But, no, we need to have our freedoms back from Republican to Democrat to liberal to, you know, whatever it is. Our freedoms are infringed. And I gotta make sure somebody learns a lesson, if I can make sure that that happens."

Brooks also said that he will be suing Delta for the incident.