Chileans in Montreal gathered in front of the building that hosts their consulate to protest in solidarity with their citizens back home on October 23rd. 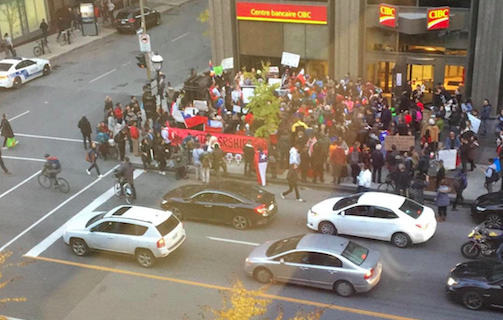 Chileans in Montreal gathered in front of the building that hosts their consulate to protest in solidarity with their citizens back home on October 23rd.

The protests in Chile began against hikes in public transportation fares, and soon expanded to cover gross income inequality, corruption, and the rise in the cost of living.

The protest is rooted deep in the systematic failures of ardent neoliberalism pursued by US-installed dictator Augusto Pinochet, whose bloody rules and uber-capitalist economic policies divided the country on his legacy.

As protests in Chile worsened, the President issued a public apology for his moves. However, this seems to have further emboldened the protesters who are not in any mood to stop.

The Chilean protests have increased in their anti-capitalist fervour, with similar protests going on in France, and Lebanon.